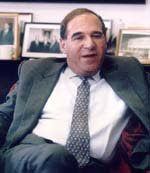 Leon Brittan: "Oh, well, you see, you couldn't possibly understand because I'm so very clever and you're such a greasy little prole..."

Leon Brittan has long been a byword, in the Devil Household, for "smug, fat, oleaginous, over-bearing cunt with an annoying, oh-so-fucking-superior voice and a face one would never tire of slapping".

The fat bastard has been a bête noire of Devil Pater for many years, not least because Devil Pater is implacably opposed to the European Union and he considered it to have been even further debased with the appointment of Brittan to the Commission in 1989. Leon occupied his position, like some fat toad squatting on a rock, until 1999, when he and the rest of the Commissioners were forced to resign for being horribly fucking corrupt.

Now darling Leon is a Lord and today writes about the imminent discussion of the Lisbon Treaty Bill in the Upper House.

Today the Bill ratifying the Lisbon treaty comes before the House of Lords, having comfortably surmounted all its hurdles in the Commons.

The first and main question for the Lords is whether the treaty is good for the UK and for the EU as a whole. I would give an unhesitating affirmative answer to both.

It is worth reminding ourselves that, whilst the EU is pretty damned corrupt anyway, this fat, self-satisfied cunt was part of the only Commission that was so blatantly and shockingly corrupt that they were forced to resign.

It is pertinent to remind ourselves of this because Lord Brittan is even being corrupt in his writing of this article. How? Well, I'll let Timmy sum it up.

Well, of course, you would say that, wouldn’t you?

You are in receipt of a substantial annual pension, the continuing receipt of which requires that you act in the best interests of the European Union. As perceived by the European Commission, naturally.

Indeed he is, as are many other Lords. UKIP peer, Lord Pearson of Rannoch, has been trying to force the oh-so-noble Lords who are in receipt of these pensions to declare them as a financial interest when they speak on the subject of the EU for some time now.

My Lords, if the noble Lord has a little patience, he will hear the kernel of my argument. Former Ministers do not lose their pensions if they fail to uphold the ongoing interests of the country. As I was saying, these noble Lords are proud of their careers in the plush and well remunerated conclaves of Brussels, but of course they are also—here I exonerate the noble Lord, Lord Hannay, if necessary—already in receipt of a generous EU pension, or are looking forward to one. Few people know that EU pensions are unusual in that holders of them can lose them if, in the opinion of the Commission and the Luxembourg court they,

"fail to uphold the interests of the European Communities".

A large and growing number of noble Lords feel that these pensions should therefore be declared in your Lordships' debates, although as far as I know none was declared today, as usual.

So, the Lords have decided that being in receipt of an EU pension that can be withdrawn if said Lords "fail to uphold the interests of the European Communities" is not a declarable financial interest.

What the fuck? How the hell is being paid to espouse a particular view not a declarable interest?

So, the EU has even managed to corrupt the very oldest of our legislative institutions; it will be something worth bearing in mind when those in receipt of said pensions rise to speak in favour of the Lisbon Treaty and against a referendum. Which, of course, darling Leon is firmly agin.

I am, however, in principle opposed to referendums, as they are incompatible with representative parliamentary government, the true hallmark of the British constitutional system.

As I have said before, Leon, you utter cunt, when the politicians currently elected represented themselves to the people, 98% did so on a platform of promising a referendum on the EU Constitution.

Since just about everyone, apart from the Labour government (surprise, surprise!), agrees that the Lisbon treaty does precisely the same as the Constitution (albeit via a different technical method), we should have a referendum.

If the politicians do not represent themselves to the people honestly, then we should consider their election null and void. Notwithstanding the idea that "manifesto pledges are not subject to legitimate expectation", if these politicians had any honour, they would all immediately resign and force an election.

As it is, we are just going to have to store all of these insults up against the day when the great British public decides that it has had enough, frankly, storms Westminster, tears these bastards from their plush offices and hangs them by the neck until they are very, very, very dead. And believe me, you obese, oleaginous, smug, hypocritical, corrupt, perfidious, lying bastard, you'll be fucking joining them.
By Devil's Kitchen at April 01, 2008

It is perverse that he and his type can sit in the HoL, he is not an honourable man. I have the greatest respect for the legitimate members of that place but none at all for these low life
traitors, for that is what they are. Did they not swear fealty to Her Majesty The Queen? An oath quickly forgotten apparently. Bring back the ancient punishment for treachery and sod the EU.

"manifesto pledges are not subject to legitimate expectation"

When the time comes you need to make this into an LPUK poster, possibly with the byline:

"LPUK: a party for manifesto's in perspective, not subjective" or "LPUK: we have legitimate expectations"

BTW did you ever create that topic centre in the LPUK forum for organising press releases? - perhaps another use would be "pet"projects - such as finding out who is in receipt of an EU pension in the house of Lords/politico wooden-top...

Leon Brittan is a fat supercillious cunt who speaks for no-one but his own over-inflated ego. He should never have been allowed to sit in the House of lords since he patently feels he owes no allegiance to that house or this country. One change to the rules for the HoL I would like to see would be the exclusion of any and all memebers who are proven to have an allegiance to some foreign body. That would get rid of a lot of the spongers and hangers-on.

Thank you for this. I cannot remember ever being so fucking angry.

That any clear financial interest is not deemed to be declarable by a Parliamentarian who is urging the subjection of his national legislature to another would, in any sane country, be incredible... but this country has lost its mind.

These bastards have no conscience and no shame. We are insane not to hang them for treason.

You are right: lamp-posts and sharpened insects are the only answer.

surely his comments are treasonous.we are really gonna have to make lampposts stronger.

Bring back the hereditary peers...no man is without fault but one cannot question where their fealty & loyalty lay.

Not being all that taken by the death penalty, what about penal servitude in a chain gang on, say, the Falklands?

This crap depresses me beyond belief and to be honest I have given up on the UK ever getting itself free of the socialist scum in Europe. My visa for Canada has come through and we will be off shortly. I don't expect the grass to be greener as there are far too many socialists in Canada as well, but I don't want to be a European. I despise Europe and I despise the traitors who sold us out to these bastards.

At least the EU helped him get away one step ahead of the Met all those years ago...

He taught Nick Clegg everything he knows during his time as his gopher.

Leon Brittan is the kind of man who is so far up his own arse that - much to everybody's surprise – his head manages to reappear surreally through his own mouth but WITH HIS ARSEHOLE STILL EMBEDDED IN IT (check out his picture)!! This is a difficult trick for most of us but quite easy for somebody equipped with no backbone and an overabundance of slippery body fluids ...