Have they no shame? 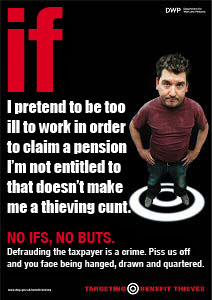 No ifs, no buts: pretending to be too ill to work in order to claim a pension that you are not entitled to is fraud, you thieving cunts.

Via Dizzy, it seems that the answer to the above question is a stark and simple "no".

If the morale of a political party can be measured in the number of inquiries made to the trustees of the parliamentary pension scheme, then Labour is at rock bottom.

"I know of many MPs in marginal seats who have quietly been in touch to find out how much their retirement income would be if they stepped down at the next election," one backbencher said. "Others are thinking about retraining to go back into the careers they left when they came into the Commons, such as teaching and social work."

MPs who retire on grounds of sickness are given special dispensation to claim their full pension before they reach the age of 65. Several have made inquiries about whether it would be possible for them to quit the Commons on grounds of ill health—before voters eject them via the ballot box.

Let me make this clear to any MPs who do not seem to have got the message: fraud is a crime. Just because the money involved has been stolen from the people of this country does not make the crime any less.

Seriously, do these people have no shame? These fuckers claim to be virtuous enough that they can make the laws that bind we proles, and then believe themselves to be above those laws. I mean, it would never do for the law-makers actually to obey the laws that they make for the rest of us, would it now?

After all, it's only fucking magic money, eh? It just falls from the fucking sky. In no way does this money represent the blood, sweat, tears and sheer, hard, fucking work of the people of Britain, does it?

After all, it's only tax money; there's plenty more where that came from, eh? If you need more money, all you need to do is to extort more from us; we must pay or go to prison. And as long as you keep shoving up your salaries and expenses so that you don't notice the tax-rises and inflation inflicted on the rest of us by your policies, you couldn't give two craps, eh?

These people really are the fucking pits—a bunch of fucking corrupt little shits. I intend to monitor this situation and make a note of any MPs that try this tactic; I would love to be making enough money by the time of the next election to prosecute every single MP that tries this on.

Fortunately for the Devil, there exists a piece of legislation to enable this potential fraud to be investigated and prevented before it actually happens - and the investigation doesn't have to be done by the police.

Parliament intended RIPA to be used against ordinary people by authorities other than the police, but there is no reason why it can't be applied to MPs.

DK is not necessarily correct on one point; not all cheating, morally reprehensible though it is, amounts to criminal fraud. However, pretending to be sick in order to cash out early looks as if it is possible to be a crime, which is enough grounds to begin an investigation.

So the first thing which the Parliamentary office should be doing is recording who is asking questions about retirement on grounds of sickness ("interception of communications" and "the acquisition and disclosure of data relating to communications").

Asking questions in itself is OK , but later on that could be used as evidence of an attempted fraud, or an actual fraud if the MP turns up miraculously recovered.

Any Labour MP who is worried about their future should have worried more about their constituents in the past - then perhaps they wouldn't have voted for stupid things and wouldn't be facing the Order of the Boot and the RIPA-man now.

It seems the rats are hoping to get a sick note to let them leave the sinking ship ahead of time.


Apart from a serious indictment against Gordon's administration, it shows how the concept of "diz-billy" as infested the MPs as well. The canker of the Welfare State and its mindset of "entitlement" has spread back up the root system and totally rotted the heart of oak.

the careers they left when they came into the Commons, such as teaching and social work

But Hazel Blears says we have never been so well off and the UK is doing better than ever and there is no problem with over taxation and inflation cos Hazel Blears sez so!
According to Hazel Blears pensioners and the low paid are better off now than they have ever been, Grrrrrrreat!

I for one am so pleased to have the fucking scales of ignorance lifted from my blind fucking eyes! Oooooh I feel so much better now that I dont have to count my money down to the last penny and work out if I can afford to use the central heating or pay the bills and I just love rationing myself to the odd drink every couple of months and how the fuck is my ever decreasing pittance going to pay for the increases in bills and taxes! Wow I feel the weight lifted from my shoulders now because Hazel Blears says I am just deluded and mistaken that I have got about tuppence in my fuckin savings account and no matter how hard I work I cannot make headway and in fact no matter how hard I tread water I am slowly drowning! Grrrreat! thanks Hazel, thanks a bunch mate!

There is a global financial crisis. The only damn advanced country to increase the tax buden on citizens as opposed to reducing it or keeping the status quo is of course, the UK.

What is wrong with these cretins? They pump 15 billion into the system then ask the banks to pass on the rate cut. Ask? They should be demanding not asking.

They really must go.

*Trundles past the Kitchen, towing a trebuchet, heading for the A2*

"But Hazel Blears says we have never been so well off and the UK is doing better than ever and there is no problem with over taxation and inflation cos Hazel Blears sez so!"

Hazel Blears is a twat of the first water and if I ever have enough money left at the end of the month (once this bunch of grasping shagbats have finished raping my salary) I will buy myself a piece of 2 by 4 and a bag of rusty nails and beat the hatchet faced ginger witch into the middle of next week.