The EU is a pus-ridden, piece of shit... 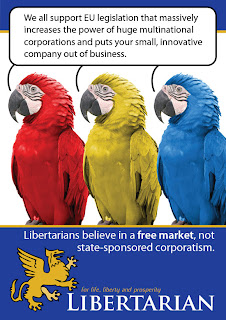 As for those who support the EU in principle whilst admitting that it is not the organisation that you'd like it to be, well, you are a bunch of awful, shit-eating bastards too, frankly. Supporting our membership of this organisation because it might get better is broadly analogous to advocating that we should have joined the USSR because "Uncle Joe might be killing people now and fucking the entire economy, but if Communism was done properly it would be really nice and just and fluffy and all". You are terrible fucks whose reproductive organs should be ripped out, devilled and force-fed to you.

You are all destroyers of small business, people who would deny others the freedom to make a living; you are supporters of corporatism, oligarchies and unelected dictatorships; you are murderers by proxy of the disadvantaged, rapers of ambition and fuckers of aspiration; you are deeply unpleasant cunts and even these words cannot convey the depths of my contempt for you.

And what has raised my ire? It is this Booker piece about yet more repressive legislation, in the Roman Law model, from the EU.

Anyone wishing an insight into how the real government of our country now works might consider the plight of Quatchem, a small but enterprising chemical company in Oldham, which makes a range of disinfectant products.

Two years ago, under its director and part-owner Dr Rubinah Chowdhary, an experienced biochemist, the firm was looking to expand its business and its product range - until it ran into something called the Biocidal Products directive, issued by Brussels in 1998 but only now coming fully into force.

Since then the company's expansion plans have had to be put on hold. Hundreds of hours a week, including the time of two PhDs and a quarter of its workforce, have been taken up just with fillng forms and trying to work out how to comply with the directive's astonishingly complex requirements.

The task is twofold. First, under the directive's Annex 1, the firm must win a general "listing" for its main basic material, a common chemical known as benzalkonium chloride, which for nearly a century has been safely put to an extensive variety of uses, for example in baby wipes, antiseptic skin creams such as Savlon, soaps and disinfectants used in food and veterinary premises.

Even though this compound provides the basis for thousands of commercial products, no company will be able to use it without a listing from an EU office in Italy.

Right, so we have a chemical that has been in use for decades (if not longer) that now must be listed with the EU to be permitted. This is much the same process that must be gone through with the REACH Directives, of course.

On a broader point, it is also employing the Roman Law method (as opposed to our Common Law): everything is illegal unless made specifically legal.

Brussels imagined that companies might get together to share the colossal costs of this process, involving dossiers of technical data running to thousands of pages and expensive testing against new safety standards.

But although the larger chemical companies have formed consortia for this purpose, some opening offices near those of the authorising authority, they make it impossible for their smaller competitors to join them.

Well, fuck me: ain't that a surprise? The big pharmaceutical companies have banded together to form an effective oligarchy. Well, who would have fucking thunk it?

Not the fucking tossers in Brussels, evidently, the evil, technocrat, fuckwit cunts.

Quatchem has found it difficult enough to establish with the Italian officials, who appear to have little experience of this chemical, just what is required to get listing. But even if the firm succeeds it will then, under the directive's Annex 6, need to apply to the Health and Safety Executive, as the "competent authority" designated by Brussels in Britain, for separate "market authorisations" for each of the dozens of products it sells based on the same compound.

For each of these, Quatchem will have to pay a further fee, estimated by the HSE at up to £20,000 a time.

Dr Chowdhary has calculated, from the impact statement published with the directive, that to go on selling her present products may cost her firm as much as £6.5 million. Its annual turnover is £2 million.

So, basically, Quatchem will either have to take on crippling debts at a time when credit is scarce or it will go out of business. Nice fucking work.

Since these costs will be much the same for her as for a multinational with a turnover of billions, she says: "I do not know how a directive could have been designed like this. The needs of smaller businesses have simply not been allowed for. It is astounding."

They don't care about you, Dr Chowdry. They knew that this would happen.

The reality seems even worse. It is clear from the impact statement that Brussels knew, when it drafted the directive, that it would put what it calls small and medium enterprises (SMEs) at a significant disadvantage against their big competitors. "SMEs," it admits, "are particularly affected by the directive, while larger companies are more likely to be able to bear the costs of dossier preparation."
...

The only people rejoicing at this example of regulatory overkill are those multinational companies that played a considerable part in drafting the directive. Such is the horrifying record of regulation in potentially toxic chemical products (eg the organophosphates manufactured by multinational pharmaceutical companies) that we cannot confidently look to the new EU-wide army of unqualified bureaucrats for any gain in safety.

And herein lies much of the problem: the big multinationals are able to afford to lobby for particular Directive changes, to afford expensive consultations; the very process of law-making is skewed to the multinational corporates.

The result is to entrench their position through legislation that stops small competitors before they can even get started. This is state-sponsored corporatism and it is deeply wrong, inefficient and detrimental to progress.

The Biocidal Products Directive does not actively ban competitors but it does raise the barriers to entry so high that it effectively does the same job.

One likely upshot of the directive is that many of the 1,000 SMEs in Britain that rely on chemical formulations for their products will be unable to afford the costs (most of them wholly unnecessary - chemicals such as benzalkonium chloride have been exhaustively documented for decades).

Most will be forced out of business. Many useful products will disappear from the market. The cost of developing new, more effective products, in a market where most are low-value and offer only small profit margins, will be so prohibitive that innovation will be stifled.

And the human race, as an entire entity, will suffer. We will suffer from the withdrawal of products, we will suffer because of all of those products—which include drugs, medicines and other beneficial innovations—that will now never be invented. The people of the EU, in particular, will suffer as innovators move abroad to develop their products, and sell them in countries that are not ruled by oligarchical diktat influenced by corporations.

One of the most spectacular recent failures of the EU is the Lisbon Strategy, part of the aim of which is to make the EU "the most dynamic and competitive knowledge-based economy in the world capable of sustainable economic growth".

Can anyone see, from the above story, why the EU hasn't got a fucking hope in hell? Can anyone see how EU regulations stifle innovation and strangle aspiration?

That is why those of you who support this organisation are such evil, fucking cunts who should be beaten to death with your own entrails. You are, quite simply, scum.

UPDATE: There's more on this over at EU Referendum, in which Dr North expands on just exactly how these regulations absolutely screw over small businesses at least three times. One might term it the Making Small Businesses Airtight legisalation.

And thus Marx’s prediction becomes true, markets slide towards monopoly. But not because of the inevitability of this happening in a market economy, but becuase of the interaction of big government and big business.

Just as an example here, I complained about the restrictions that REACH places upon one of our imports. One Europhile federast said that it was simple, I should simply band together with my competitors to pay the costs of registration and testing of the product.

Erm, I don’t actually know who all my competitors are for a start. And even if we did, and we combined to get that registration, there is no way that we can stop a new entrant into the market from using that registration without paying for it or contributing to our costs. Given that the cost of the registration is of the order of €100,000 and the whole EU market is worth €500,000 a year, on tight margins, that’s something of a problem really, don’t you think?

Indeed. It's fucking insanity and it is not going to get any better.
By Devil's Kitchen at April 27, 2008

I love the word Tim Worstall has used in his take on this issue:

"Brussels imagined that companies might get together to share the colossal costs of this process" since being found guilty of collusion and effecting a monopoly would be cheaper than providing, hundreds of times over, duplicated research and documentation.

Working in a similar sector this too is a bugbear of mine - our central headquarters in Germany have started gathering all its subsidiaries labels from across europe and is currently updating all its biocide information because of this bloody rule.

The problem with these is that the various regulatory bodies are self-empowering; they only require a pretext from which to invoke a new (and commonly expensive with these type of compounds) regulation which the smaller companies can no longer cope with enforcing; the trend is to sell out if you can or go under if you cant.

I disagree that the EU knew this would happen.

They truly have no idea what will or will not happen, and when they do find out what is really happening...

then they can show they don't give a fuck

Another fucking reason to leave the stinking EU.