It seems that I have been tagged by Vindico: this time I must show you my desk. The last time that I did this meme, I was still in Edinburgh, and so I thought it worth revisiting—here it is. 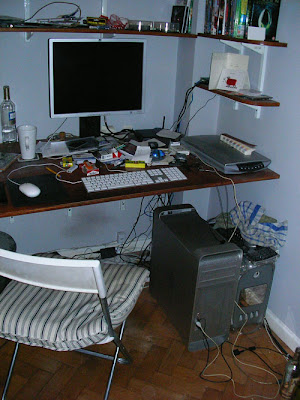 You will note the packets of cigarettes, the large cup of coffee and the empty bottle of wine: that's my diet pretty much covered. I have posted pictures of my two desktop Macs—a Mac Pro and a G4—before, so no surprises there. My MacBook is in the bedroom, where it is acting as my alarm clock (before I lug it into work).

Other than that, there is a scanner, a graphics tablet (off to the left), router and Ethernet switch. You might also note the card with the red sheep on it, which includes a signature and birthday wishes from Mike Scott (whom my brother met at an airport).

Fairly humdrum stff, really. I shan't bother to tag anyone, but feel free to indulge if you want...

UPDATE: Mark Wadsworth points out that it was supposed to be a dual desktop meme. Well, I am afraid that my computer desktop is precisely the same as it was when I did this one last time.

Add to that the fact that I am both vain and proud of a few pieces of my artwork, and it is inevitable that a piece by me should be my desktop image. As it happens, it is a faded version of Last Chapter of Dreaming. 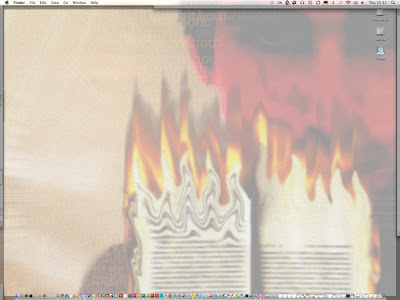 For those of you wondering about the grey borders, rather than minimise all of the windows that I had open, I used Apple's F11 Exposé to zip them to the edge of the screen.

Oh, and for those of you who have ventured this opinion—yes, that chair is very uncomfortable...
By Devil's Kitchen at April 22, 2008

A mac user AND a southpaw.

You definitely are Satan.

My computer chair is fucking awesome. It's huge and comfortable and made of leather. And my computer desk is also well hard.

It's just a pity my keyboard is a biege, covered in plaque and 9 years old - yet somehow I just can't bring myself to get ride of it.

I am a southpaw but trained myself to use the mouse with my right hand so I could scroll/click and take notes at the same time.

It should be Caffein, Nicotine, Alcohol *and* Chocolate.

The back of that chair looks mighty uncomfy. This started off as a 'double desktop' meme, but your screen appears to be off (unless that's some cool Blackle website you're looking at).

The fourth food group is aspirin, isn't it?

I struggle to FIND the keyboard most days.