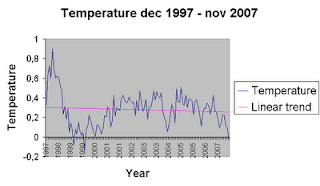 Via Iain Dale, I find this somewhat disingenuous BBC story. [Emphasis mine.]

Global temperatures will drop slightly this year as a result of the cooling effect of the La Nina current in the Pacific, UN meteorologists have said.

The World Meteorological Organization's secretary-general, Michel Jarraud, told the BBC it was likely that La Nina would continue into the summer.

This would mean global temperatures have not risen since 1998, prompting some to question climate change theory.

But experts say we are still clearly in a long-term warming trend—and they forecast a new record high temperature within five years.

Now, let's look at that highlighted section again, shall we?

This would mean global temperatures have not risen since 1998...

Now, is that not clearly meant to imply that temperatures not only haven't risen since 1998, but also that they have not dropped since 1998?

Let us hope not, for that would be a big fat stinking, fucking lie. Global temperatures peaked in 1998 and then dropped and we still have not reached that peak again. In fact, as the graph above shows, there is a definite downward trend.

This would mean that temperatures have not risen globally since 1998 when El Nino warmed the world.

Oh, riiiiight, it was El Nino that caused the 1998 peak and not global warming? Does anyone remember that being reported at the time?

So, we could more accurately write that...

... this would mean global temperatures dropped sharply after the 1998 peak and the trend has remained flat for the last decade. Apart from this year which has been exceptionally cold.

I am sure that this is just sloppy reporting by the BBC, however, and not in any way a desperate ploy to ensure that they don't look like total fucking idiots for embracing this AGW fantasy...

UPDATE: via Tom Nelson, do remember that old Stephen Scheinder quote (Professor of Environmental Biology and Global Change (Professor by Courtesy in the Department of Civil and Environmental Engineering) at Stanford University, a Co-Director at the Center for Environment Science and Policy of the Freeman Spogli Institute for International Studies and a Senior Fellow in the Stanford Woods Institute for the Environment). [Emphasis mine.]

"On the one hand, as scientists we are ethically bound to the scientific method, in effect promising to tell the truth, the whole truth, and nothing but—which means that we must include all the doubts, the caveats, the ifs, ands, and buts.

On the other hand, we are not just scientists but human beings as well. And like most people we'd like to see the world a better place, which in this context translates into our working to reduce the risk of potentially disastrous climatic change. To do that we need [Scientists should consider stretching the truth] to get some broadbased support, to capture the public's imagination.

That, of course, entails getting loads of media coverage. So we have to offer up scary scenarios, make simplified, dramatic statements, and make little mention of any doubts we might have. This 'double ethical bind' we frequently find ourselves in cannot be solved by any formula. Each of us has to decide what the right balance is between being effective and being honest. I hope that means being both."

Yes, fuck this environment bollocks. Only gay, Bolshevik terrorists and asylum-seeking paedophiles believe in it.

I saw a programme on Channel 4 once.

Warming in the first half of the 20th Century was as pronounced as that in the latter part of the century and yet the warming in the second half is deemed to be a) bad and b) our fault. Also, we now have the BBC saying that for ten years the global temperature hasn't increased at all - that's nearly a third of the current warming phase.

I just feel like I'm being conned. When dissent is jumped on so severly as it is in this debate there just has to be something fishy going on.

It must have really hurt the wankers at the BBC to actually report that. When it appeared on TV last night I sat back and waited for the expected, "However the global warming trend etc etc ad nauseum" We'll have glaciers parking up outside Broadcasting House and they'll still be saying they don't affect the overall trend. Obviously El Nino equals AGW whilst La Nina equals a slight hiccup in AGW i.e when it's hot its global warming and when it's cold its global warming. Rain, snow, hurricanes are all AGW and given time they'll find a way to blame earthquakes on it too

Because more and more people have caught on to this scam, many of these truth-challenged wankers have stopped using "global warming" and replaced it with "global climate change", an ambiguous term that means anything they want it to mean. It is intended to mislead you and make it impossible to pin them down on what exactly they think is wrong with the climate (as if the climate as it stands today is how the climate should be, forever).

You really have to watch this. It neatly sums up some of my views on AGW.
http://www.youtube.com/watch?v=eScDfYzMEEw&feature=related

When politicians latch on to some topic totally outside of their understanding and use it as a basis for making policies you know immediately there is a problem. Usually because politicians don't actually undersrand it. They also distort it. Al Gore's fil had at least 11 mistakes in it. Mistakes that politicians would have used to rubbish the whole idea. They didn't. Be afraid, be very afraid.

BTW, 450 million years ago there was an ice age in the Ordovician period. The atmospheric CO2 was higher than it is today. But hey, that's true, verifiable and testable.

Why is Mars warming up? Martian cows farting? There is a trace of methane in the atmosphere on Mars.