That's a worthy cause, Darling

The Alba Diary of the Scotsman reports that a Leith landlord has barred Alastair Dalring from his pub, in protest at yet more money shoved on booze.

YOU'LL never eat lunch in this town again: the landlord of the Easter Road bar and eatery, Utopia, has placed a poster in his window, warning Alistair Darling to keep off the premises.

No sunshine on Leith for Darling
It shows a noose above Mr Darling's head, with "Barred" above his picture and "Not Welcome In This Pub" below. It is owner James Hughes' personal protest against new duties on beer, wine and spirits in this month's Budget.

"The poster is meant to be humorous, but to make it clear to punters that it is not us who are putting prices up, but Mr Darling," he said. "The noose signifies that it is the government who should be hanged and not the licensed trade."

Alba does not in any way condone the idea of a necktie party for the Chancellor.

Luckily, I do. But then he'd be joining the rest of his fellow MPs anyway.

The Snob, however, points out that Darling—who happily inhabits the rather more rarified atmosphere of Morningside (completely the opposite side of town from Easter Road)—is hardly likely to notice the ban.

I, therefore, implore all bloggers to petition their locals - let's get Darling banned from pubs up and down the land!

Sounds like a good idea to me. Even better, let's make sure, at the very least, that Darling is banned from his own locals, both in the Smoke and the 'Burgh...

UPDATE: I see that the impecunious Spartan chap has weighed in in typical style.

The Scotsman's diarist is careful to reassure us that he "does not in any way condone the idea of a necktie party for the Chancellor". Inhabitants of the political blogosphere observe no such proprieties. But, while we wait for the happy day when Darling and his fellow ministers tapdance on air in front of cheering crowds of drunken revellers on St Stephen's Green, we can at least take some small steps towards restricting their freedoms as they are so keen to restrict ours.

And so a meme is born. Bloggers of Britain, rise up and petition your local watering hole! Most of you are alcoholics like me, and will doubtless be on first name terms with the manager. Persuade them to put up "Not Welcome" posters in their window. Let every bar, pub and drinking den become a no-go area for this badger-browed bastard. Let bouncers be issued with mugshots and service refused from Penzance to Peterhead.

Indeed! And if you spot a pub with such a photo in the window, do feel free to snap a photo and send it in...

UPDATE 2: if, of course, you happen to be a publican, feel free to use this image, compliments of the Devil. Simply click on it and you will get a full A4 size poster for you to print off and stick in your window... 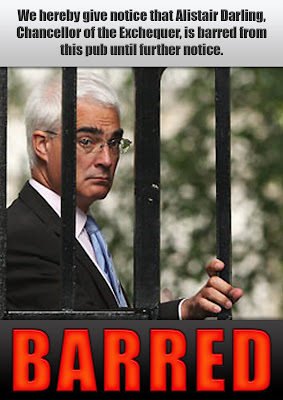 This is all just a conspiracy against the Welsh.

Where does he live in London? Many MPs live near me so I suppose one of my locals may be his too. I shall start mentioning it.

Can someone get hold of a picture?
Alternatively could DK design something for Pubs to download and print off?

Is he still in Morningside? Neither me or the boy have seen him for ages. He used to get his copy of Private Eye from the newsagent across the road. Maybe he doesn't get Private Eye any more...


Bet he drinks in the Canny Man: the pub with a list of all the things you can't have/do on a big brass placque next to the front door.

I meant *did* LOL

Fron what I can remember of the Darling family, being barred froma pub near Easter Road is no great loss- been barred from a pub near Tynecastle or Murrayfield might be a different thing

Unfortunately, I imagine some petty little socialist bastard at the council will start making noises about the pub's license.

Anonymous said: 'This is all just a conspiracy against the Welsh.'

Darling is being banned from a pub, not from sheep, so it can't be a conspiracy against the Welsh ... can it?

Great stuff DK! Smells like the start of a blogburst!

Very off topic, but I saw this on the BBC "Have Your Say" board:

"Prior to Colonialism, Capitalism, Communism & Globalism there was no Tourism and the vast majority of the world's population lived happily at a day-to-day subsistence/survival level with their own cultures, religions, traditions etc.
When any of the above "isms" is visited upon a nation, local survival skills and individual identity for those peoples is either eroded or lost.
I remember seeing Ray Mears re-introduce fire-making to a Brazilian tribe who'd lost that skill due to tourism."

Emphasis is added. I wonder if the person who wrote this has ever tried to live 'happily' at a day-to-day subsistence level. How happy can you be if you haven't got enough to eat or your children die of malnutrition or easily cured diseases? Doesn't this post sum up perfectly the Left's ludicrously idealised view of life prior to Industrialisation? Only an urbanite who has never, ever had to grow/catch his own food would contemplate holding views as nutty as this.

Brilliant, now more people will be encouraged to buy cheap alcohol from supermarkets and go on benders before heading out for the evening - well done Darling!

Following an Edinburgh landlords decision to ban the Chancellor of the Exchequer from his premises after a budget that was punitive for drinkers, North East Tory MSP Alex Johnstone is urging pubs across the North East to follow suit and demonstrate their condemnation of the tax hikes on alcohol.

Mr Johnstone said "The Chancellor has raised the duty on alcohol under the pretext that it is in a bid to combat binge drinking. But by even the simplest calculations, his tax hike will do nothing more than raise money for the treasury. For example, if an individual went out and drank ten pints of cider in an evening, then Mr Darling's efforts in beating the booze culture will in fact have cost the drinker just thirty pence more. That’s hardly going to make someone think twice is it?"

"As for the extra fifty nine pence that was slapped on a bottle of whisky, it has since been revealed that this might not even raise any extra cash at all. I'm sure this will give cold comfort to the many people employed in the whisky industry, especially across the North East, whose jobs were put at risk by this extra duty."

"No-one underestimates the need for action in tackling Scotland's booze culture, it is something that needs urgent attention and a holistic attitute. This budget does nothing to address this and I'm not alone in being disappointed that the government has come up with such a simplistic response."

Mr Johnstone concluded "Barring Mr Darling from licensed premises will send a clear message, that ordinary, responsible drinkers should not be seen as a soft touch for raising money to pay for previous fiscal incompetence."