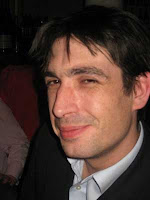 "Are you seeing what I'm seeing? I sincerely doubt it..."

Your humble Devil is feeling a little knackered after a long weekend of general debauchery, during which he, alas, broke his resolve somewhat. Although, he does remember all of Friday night, the latter part of Saturday's shenanigans are a little blurry [see pic], although he does remember picking up some lass and spinning her around which is not his normal behaviour...

However, in the latter case, your humle Devil's intoxication was due, in large part, not merely to alcohol but to some slightly stronger substances. I shall not elaborate, except to say that, at one point in a Camden pub, I was convinced that I was, in fact, walking on the ceiling rather than the floor. Which was fun.

However, given my lack of weekend engagement with your good selves, I am just going to run off a swift roundup of things that have caught my eye (and been sitting in my Dock for weeks).

Firstly, I have been reading the Civil Serf blog for a few months with the kind of faint horror that one gets when one realises that the situation was worse than one had ever dreamed of. Now, via Bishop Hill, it appears that Civil Serf is being hunted down and her blog has gone offline.

The Sunday Times has a story speculating about the identity of Civil Serf, the anonymous Whitehall blogger.

The Civil Serf - as she calls herself - claims to be a 33-year-old fast-stream civil servant ready to expose the daily chaos of the Labour government machine while lampooning ministers and highlighting the idiocy of mandarin colleagues. There are also moans about drunken advances from the opposite sex.

It's a great blog - she writes beautifully, or at least she did, because as of this moment the whole site appears to have been deleted.

I know a couple of fast-track female civil servants, but I am pretty certain that none of them were Civil Serf; however, I would also echo Dizzy's call for her not to give up.

I don't know if she might read this post, but if she does I say don't stop. Let the dust settle then contact one of the political bloggers out there to see if they can help you. It's worth it for the humour and the way you lifted the lid on some the absurdity.

Again, I have no idea if Civil Serf ever reads this blog (given the blocking mechanisms in Parliament—in some departments The Kitchen is, apparently, blocked as "porn"—it is unlikely), but I would be more than happy to give her space at The Kitchen...

Next up is this UKIP-sponsored film, Remote Control. It's not too bad, although I personally don't go for the big emphasis on immigration. Further, the interviews with people who have not heard of the Lisbon Treaty merely gives ammunition to those who maintain that we should not have a referendum because people don't understand enough about what they are voting on.

However, what it does try to do—and it is something that needs to be done—is to point out to people that the EU impacts on many aspects of their lives. So, whilst the EU may be low down the list of people's priorities, immigration regularly comes first or second and, of course, much of our immigration policy is in the grip of the EU. And, as it happens, so are a lot of other areas of life: people need to be made aware of precisely how many and to what extent (provided that you can keep them awake, of course!).

One of the things that we should be considering, of course, is what economic benefit the EU confers; when doing so, I came across this old Thunderer article from Timmy, which looks at the figures.

As an example, look at the single market programme (SMP), supposedly the great economic success of recent decades. Gunter Verhuegen, the EU Enterprise Commissioner, admitted on Monday last week that the bureaucratic costs to business of complying with EU regulation, almost all of which is to do with the SMP, is some €600 billion a year.
...

The Commission has also noted that the benefits of the SMP have been substantial, an addition of some €164.5 billion a year to the GDP of the countries within the Union.

Losing €600 billion to get €164.5 billion back in order that the politicians can enjoy and exercise their power is not one of those answers that passes such a cost-benefit analysis.

Quiet so. And the Single Market, remember, is meant to be the bit of the EU that has worked really well! So, as Timmy, says, the only really important question is, "can we leave yet?"

Next up, we must always remember that it is not only the government that seek to intrude into our lives; Longrider highlights a little-trailed advertising medium called Phorm.

Courtesy of the Spy Blog, a little scam I had missed.

The Register has published some diagrams of how the appalling Phorm web advertising scheme will work, Major UK broadband Internet Service Providers British Telecom Retail, Virgin Media and Carphone Warehouse TalkTalk, all seem to have signed a “commercial suicide pact” contract, to abuse their customer’s data privacy, without first obtaining their prior informed consent.

The essence of this little scheme is that the ISPs in question sell the right to tap into their customers’ web browsing activities directly so that the user may be subjected to targeted advertising.

This is incredbly intrusive (and I shall pass this on to Devil Pater, who is far from happy with his service from Talk Talk as it is) and my provider had better not try it...

As part of plugging my friends, here's a nice big Scotsman interview with the highly amusing Penny Dreadfuls. I was talking to one of them last night and they will be doing some London previews of their new Fringe show in late April.

I expect it to be most entertaining, in a gentle Victorian fashion.

Tim Worstall has set out, for his own reference (and I reproduce it for mine), a definitive explanation of the often wrongly quoted gender pay gap figures.

Finally, and this is old news via Guthrum, it seems that we haven't seen the last of darling Patsy Hewitt.

Patricia Hewitt was the worst Health Secretary we have ever had and probably the most patronising Cabinet minister ever to serve a Labour Prime Minister. But, as with Peter Mandelson before her, who was forced to resign in disgrace not once but twice from the Cabinet, she is being rewarded for inflicting huge damage on the NHS with a plum post on the EU gravy train. Hewitt, as we report today, has Cabinet backing to replace Mandy as Britain's EU Commissioner.

We should rename Brussels the Labour school for failure, as the old Welsh windbag Neil Kinnock, who lost two general elections, was commissioner before Mandelson. Frankly, the Commission, with its nanny state diktats, deserves Hewitt. "Patricia can't help it, but she always sounds like the headmistress of a minor public school telling off the lower sixth," one minister told me.

I look forward to being able to collude with my impecunious Athenian friend to devise yet more unpleasant tortures and deaths for Patsy. Still, if you should desire reminding of our proposed treatments of this patronising, sanctimonious sack of shit, here's a couple of choice examples:

UPDATE: thanks to Trixy for pointing me in the direction of this from the New Statesman politics blog.

What have we learned this week?

I doubt it. And, as Trixy rather cattily points out, "much loved" by whom, exactly...?

UPDATE 2: Jon Worth points out that he called the possibility of Patsy as Commissioner back at the end of November. He also points out that Mandelson has not ruled out a second term. Fucking hellski...
By Devil's Kitchen at March 10, 2008

Now here's an Anon who knows their drugs...

Funny, you don't look knackered in the picture. :)

I'll second the ket... Although, I'm partial to holding on to the floor ;)

Anyway, Hewitt: Can't we have her transported back to Oz?

Patricia Hewitt has that condescending tone that Joyce Grenfell used to adopt in her monologues.

I wonder if she used to admonish teh chancellor in cabinet meetings when he picks his nose: "Gordon, Gordon. Don't do that!"