Mad Nad will believe anything...

... if it suits her own damn fucking agenda. And Mad Nad's agenda is her near-obsession with attempting to stamp down on abortion or, if you prefer, a woman's right to choose what happens to her own body.

Bookdrunk, who has a special interest such affairs, has been giving Mad Nadine Dorries a repeated and much-deserved kicking over the last few months. Here's a typical sample, exploying the Polly conundrum, of the academic Bookdrunk's output.

To be fair, Nadine Dorries is either horribly ignorant about something she claims to be well informed about.... or she's a liar. As Unity points out, the data showing survival rates for births before 24 weeks touted by Dorries is currently far from reliable. It's certainly at odds with existing peer-reviewed evidence, discussed in part over the weekend.

Ben Goldacre's summary tells you most of what you need to know:

Even if this data stands up eventually, right now it is non-peer reviewed, non-published, utterly chaotic, personal communication of data, from 1996 to 2000, with no clear source, and with no information about how it was collected or analysed. That would be fine if it hadn’t suddenly become central to the debate on abortion.

You may also remember that - far from being grateful for attempting to bring clarity to the debate - Dorries accused Goldacre of breaching parliamentary procedure by.. reading public accessible evidence, a baseless slur which she has never publicly addressed.

Presumably any call for an apology would be met with another display of name-calling and denial. 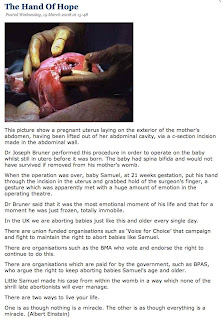 Now the aforementioned Ben Goldacre has emailed me to draw your humble Devil's attention to Nadine's latest load of old shit, which you see pictured to the left. What's wrong with this picture (to quote Placebo)? Surely it shows, as the ineffably insane Nadine claims, an ickle foetus reaching out to clutch the surgeon's hand: after all, the camera never lies, right?

In fact it seems this is a myth propagated over email and through fabulous Christian websites.

“It has become an urban legend,” says Bruner, the Vanderbilt University surgeon who fixed the spina bifida lesion on Samuel.

Some opponents of abortion have claimed that the baby reached through the womb and grabbed the doctor’s hand.

Samuel and his mother, Julie, were under anesthesia and could not move.

“The baby did not reach out,” Bruner says. “The baby was anesthetized. The baby was not aware of what was going on.”

Dr. Joseph P. Bruner stated, “Depending on your political point of view, this is either Samuel Armas reaching out of the uterus and touching the finger of a fellow human, or it’s me pulling his hand out of the uterus … which is what I did.”

I am also very happy to link, in the name of transparency and thoroughness, to here, where the photographer disputes Dr Bruner’s account of his own surgical operation on an anaesthetised patient.

Apart from anything else, the surgeon was operating on the foetus—if, as Dorries claims, foetuses can feel pain and this is a reason for dropping the term limit of abortions, would it not be rather cruel to operate on a conscious foetus? I can't help thinking that Nadine hasn't really thought this one through.

Further, Nadine was once a nurse and one would have thought that she would have realised that the mother must be anaesthetised and that, due to the fact that anaesthetics cross the placental wall, that the baby, too, must be unconscious.

But then, Nadine Dorries is completely barking (as well as being a liar and a deeply unpleasant person to boot) and the insane are not renowned for their powers of rational thought, almost by definition, really.

Still, to be caught out so blatantly, using a picture which contradicts her own argument, is, it seems, pretty much par for the course as far as Dorries goes. But then, politicians are renowned for being almost congenitally unable to tell the truth; it's just that some of them are not completely stupid.

Nadine, alas, cannot even claim the latter virtue.
By Devil's Kitchen at March 20, 2008

Hi,I do need to speak to you pertaining to important issue that concern us all.I did email you previously but there was no reply.What is your phone number ?http://www.dafka.org/newsgen.asp?.Reverend Edward from UK

Even the most basic of research would have revealed Mad Nad's story to be a crock of shite. But she can't even be bothered to do that...

Except I think she can. She probably did the research, but chose to ignore because it did not match the narrative she has written in her own pre-historic, so-called brain. She doesn't really care if other people do discover the truth, because there will be enough people to take her so-called blog at face value and not do the research.

The anti-abortion crusade relies on people like Mad Nad, whose zeal for their cause completely outweights any desire to tell the truth.

I have never understood why the issue of the survival of babies at 20, 24 or 26 weeks is relevant.
If a baby cannot live unaided outside the womb, then it should be left in the womb until it can safely be delivered.

O/t, today is a Black Day for fans of small government.

The finger-grabbing foetus featured in a recent 'Dr.House' TV program.
House had referred to the pregnant patient's 'problem' as a foetus; after his OR epiphany he called it a baby.
Whatever...the scene was well done.

el draque, you are right. The child cannot ever, by definition, be part of the "woman's body". DK you beg the question, as you always do on this subject.

el draque and little black sambo are both spot on.

You either believe in Human Rights or you don't - and the moment you start adding qualifiers like "only above a certain age" then that's only one step away from "and only below a certain age", which is only another step from...

Bloody hell, DK, I had never heard of Nadine before today. I don't need this. Her post on the foetus is of course utter mawkish botty-wipe. So then I looked at her c.v. - the women is an over promoted nurse-specialist. I shall have to increase my medication.

"When the operation was over, baby Samuel, at 21 weeks gestation, put his hand through the incision in the uterus and grabbed hold of the surgeon’s finger, " I quote directly from Nadines blog.

Ahem. If an operation is 'over' the patients incision(s) has (have)been closed and they are ready to be wheeled out to recovery. Then the operation is 'over'. I don't know how they train Nurses now, but not so long ago people had to complete three years training with six week stints in operating theatre, A&E, Medical, midwifery, surgical and orthapaedic departments before someone could call themselves a qualified nurse. To display such a pathetic ignorance of when an operation is 'over' indicates that someone didn't complete one or more of the Nursing training modules. Never mind about all the faux moralising about foetal reactions.