It's not how you protest...

... it's what you protest about. The picture below shows MEPs holding up placards, protesting about the treatment of a human rights activist. 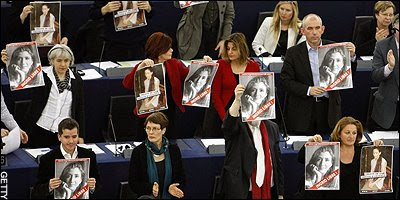 Let me tell you what happened.

Now, you may remember that a few weeks ago, a bunch of MEPs made the same kind of protest, but their placards (and t-shirts) simply said, "referendum". Here is a picture. 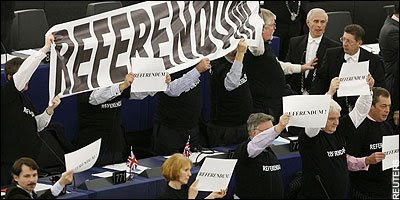 Let me tell you what happened.

A number of Euro-sceptic MEPs are to be fined for having demonstrated in the chamber in favour of a referendum on the European Constitution. Polish, Italian, French and Austrian MEPs are among those being punished, as well as a couple of UKIP members and my Tory colleague Roger Helmer. The fines range from £400 to £1000, and have been allocated more or less arbitrarily.

This blog keeps warning that the European Parliament is making its rulings despotically. If you think my language is alarmist, consider what has just happened.

No demonstration before or since has met with any such sanction. Yesterday, for example, dozens of Liberal and Green MEPs held up placards to protest about the treatment of a human rights activist. No problem there. But the sight of the word REFERENDUM was so offensive to my federalist colleagues that they sent the parliamentary ushers to tear the placards away (the poor ushers couldn’t have been politer or more apologetic) and then moved to fine the people holding them.

These fines have been dished out almost randomly. One of the Austrian members being penalised was in Frankfurt on the day of the demo. Several other MEPs who joined the protest — including a number of Conservatives, such as David Sumberg, Syed Kamall and me — have got off scot-free. Nigel Farage, the UKIP leader, was so annoyed not to have been punished that he rose on a point of order in the manner of Kirk Douglas, shouting: “I’m Spartacus!”

Everyone understands what is really going on. Members are being penalised, not for having demonstrated, but for being Euro-sceptics. Such discrimination is a daily fact of life here.

Expect prosecutions for criticism of the EU to become a daily fact of life throughout the EU countries. You think I am being alarmist? We'll see.

In the meantime, these fines are an outrage. And—as Dan so perspicaciously points out—this, ladies and gentlemen, is meant to be the democratic part of the European Union.

Although I'm sure they weren't pleased by the placards I think you'll find the fine was for breach of parliamentary rules that states such protests must be silent.

Now if the unpunished placard wavers were also vocal then you've a story.

The story is in the arbitrary nature of the punishments - people who were not present in the chamber during the protest were punished. How, exactly does that work?

Frankly, that there is a system of punishment for reasonable protest - whether vocal or not - is the antithesis of liberal democracy. Oh, wait, this is the EU, liberal and democracy don't apply.