It can never be said too many times... 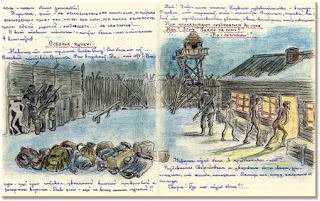 Entering The Labour Camp: one of the many drawings from the notebooks of Eufrosinia Kersnovskaya, who spent 12 years in gulags.
[Click for a bigger version.]

As the Black Book of Communism (a best seller in France, if not here) notes,

"Communist regimes are responsible for a greater number of deaths than any other political ideal or movement, including Nazism. The statistics of victims includes executions, intentional destruction of population by starvation, and deaths resulting from deportations, physical confinement, or through forced labor. It does not include "excess deaths" due to higher mortality or lower birth rates than expected of the population".

So I have never thought it was big, clever, ironic or mordantly witty to sport t-shirts with Che Guevara or a hammer & sickle on it, any more than I would wear an Adolf Hitler European tour t-shirt. I have read a lot of Solzhenitsyn, Robert Conquest and others, and the death ships of the Okhotsk Sea, the digging of the Belomor Canal and Pol Pot's Tuol Sleng should be as well known as Auschwitz.

Indeed. And yet one does not hear laws proposing to make Russian pogrom-denying illegal, does one? Will one be sent to prison in Austria for Holodomor-denial? No. And nor is there an EU framework banning the glorification of The Cultural Revolution.

That nice Mr Cameron and that socially responsible Mr Brown have promised to fund trips to Auschwitz but not to Kolyma, Norilsk or Vorkuta. Why not, I wonder? Why is such a morbid preoccupation with the, admittedly horrific, murder by the Nazis (or National Socialists) of some six million Jews juxtaposed with such a casual disregard for the tens of millions of dead Russians, Ukrainians, Poles, Chinese, Jews and all of the many other millions upon millions upon millions murdered by Communism?

The regimes shared one important charateristic, of course; they were totalitarian oligarchies; I am sure that their leaders did not think of themselves as being evil, either. But this is the kind of thing that happens when a bunch of powerful people demand that you live your life according to those leaders' personal beliefs.

Which is why, of course, I am a libertarian: because I recognise that my beliefs are not necessarily yours and it is morally wrong that I should demand that you live your life according to my personal priorities. Not only is it morally wrong, but the many tens of millions of dead people scattered bloodily across the twentieth century shows precisely where such aspirations end up: they end up with millions of people dying in labour camps and starving to death to feed the vanity of their leaders.

And yes, our democracies move more slowly but they are, nevertheless, moving in that direction. For as the state moves to interfere in yet more aspects of our lives—financial, moral, and personal—we become mere possessions of the state, tools to be used for the greater glory of our leaders.

Only those kept utterly ignorant of history—as all too many now are (deliberately so?)—could fail to see the inevitable shift towards statism as extremely worrying.

Only the smug and the stupid could imagine that totalitarianism could never happen in our great Western democracies. And all too many fools are distracted by the red herring of Islamism—a phantasmagoria of totalitarianism built up by our governments to deflect attention from their own ambitions.

Only those who anticipate being part of the ruling oligarchy could embrace all this willingly—which is why so many socialists are middle-class.

Those who welcome state intervention are either idiots or evil. Or, quite possibly, evil fucking idiots.
By Devil's Kitchen at March 11, 2008

Brown, the Millibands, Purnell, Hain and the Balls family are evil.

Ruth Kelly, the Alexanders and Darling are idiots.

Every one of them is a cunt.

Nice summary of Hayek's 'The Road to Serfdom'. Should be compulsory reading for anyone who wants to work in any form of Government service, Parliament, etc.

Ideally in schools too, to counteract the crap that has been taught by others and is seen nightly on the BBC, etc.