I want a referendum. If it's not too much to ask...

Rather unsurprisingly, those who were offered the choice of whether or not they wanted a referendum on the Lisbon Treaty EU Constitution decided that, yes, they did.

MPs were under huge pressure to support a referendum on the new EU treaty after the biggest test of public opinion on the issue so far showed almost 90 per cent of voters want a ballot.

More than 133,000 of the 152,000 people who responded in a series of mini-referendums backed a national vote on the Lisbon Treaty, which would transfer more of Britain's sovereignty to Brussels.
...

The mini-referendums, organised by the cross-party I Want a Referendum campaign group, were conducted in 10 marginal seats held by Labour and Liberal Democrat MPs.

These included those of Jacqui Smith, the Home Secretary, Ruth Kelly, the Transport Secretary, Jim Murphy, the minister for Europe, and Chris Huhne, the Lib Dem home affairs spokesman.

In total, 88 per cent of respondents backed a referendum on the EU Reform Treaty, which was signed in December in Portugal and became known as the Lisbon Treaty. Voters were also asked if the UK should approve the treaty. An overwhelming majority - 89 per cent - said no.

The turnout of 36.2 per cent was higher than in most local elections.

Indeed it was; your humble Devil has been sent a document containing a breakdown of the voting (click the pic for a larger version). 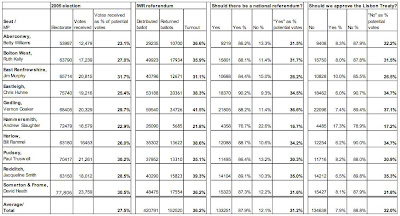 Mind you, I agree with Timmy when he opines that it'll make not the slightest difference.

That the turnout was higher than most local elections, that the vast majority wanted a referendum, and that a similarly large majority would vote no in such, makes no difference.

What, you think this Europe thing is driven by the will of the people?

Mind you, I expect to see a lot of comments like that of Matthew's.

There’s no evidence that there would be similarly large majority in a real ballot. This is not an unbiased sample -those who were anti the treaty were much more likely to vote in this bizarre stunt and for a referendum.

There is a simple answer to this point, and one that I did, indeed, point out.

What you are saying, Matthew, is that those who really give a shit about this issue were the ones who voted.

And this differs from a real referendum... how?

Of course, this referendum was rather different from a national one, in one very important regard. As someone was telling me when I was at the (grotesquely unreported) IWAR demonstration last Wednesday, Electoral Reform Services were apparently unable to send ballot papers to anyone who didn't tick the "I am happy to receive more information from Electoral Reform Services" box. So anyone who avoided ticking said box, for fear of receiving junk mail, won't actually have received a ballot paper.

Still, the chances of our lords and masters taking any notice whatsoever of this poll are minimal: they will trot out excuses, like Matthew's, and convince themselves that they are "doing the right thing for Britain".

They aren't, of course: all they are really interested in is getting their fat snouts in the trough; and now they don't even need to take responsibility for decisions. If the legislation is welcomed, then our wonderful MPs instigated it; if it is condemned, then "it's all the fault of the EU."

As long as our elected representatives can continue to draw their fat salaries, boosted by the extra Employ My Family staffing allowance, plus the I Want A Second Home allowance, their gold-plated pension and all of the other allowances, perks, and generous expenses that they skim off us, why the fuck should they care?

I want a referendum too!