You might remember that Dan Hannan pointed out that there are certain perceptions of EUsceptics and EUphiles: the former are consider "nasty" and the latter "nice". When I commented on this, I concluded with the following.

But, for some reason, it is always the sceptics who are accused of being monomaniacs, ranters, head-bangers and so on.

It is because, Dan, of one simple thing: since the EUphiles have lost the economic debate, and the political debate, and the cultural debate and the moral debate, they have nothing left in their armoury except pathetic little insults. And the only insults that they can think of are those related to "the nasty foreigners", so they call us "xenophobes", "Little Englanders" and "racists". It is why the debate with EUphiles is always so fucking pointless: because they cannot win their arguments on the basis of the evidence.

Now, England Expects shows just what level of debate EUphiles like to indulge in.

So imagine my delight, surprise and yes anger when at the bar last night, as I was buying a round, those I was drinking with called over and told me that somebody had stuck something to my back. Below is the picture illustrated. 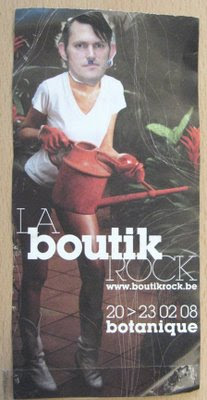 Now this is not something that has happened to me since I was doing my 'O' levels but it is a symptom of what we are talking about. I looked around the bar and the average age must have been 30-35. We are not talking children here. We are talking about the pub nearest to the European Parliament. Its clientele is a mixture of political staff, commission and other institutional officials, lobbyists and a smattering of journalists and other assorted Brussels' flotsam and jetsam.

The message is clear. To whoever stuck it to my back, I am a Nazi transvestite, (with it must be said a remarkably good body—Tim Curry eat you heart out). What it makes plain to me is that rational debate is not of much value, and my opinions are so far beyond the pale as to be ignored. After all nobody even bothers to debate with a Nazi. Their views and opinions can be dismissed out of hand as unworthy of consideration. Basic facts such as my belief system being one of individual freedom rather than state socialism is neither here nor there, I am as a Eurosceptic not to be accepted as a moral equal in any way. I am dismissible, not merely that but I am also a priori evil.

Such is the level of the debate in Brussels, it seems; such is the debate in the heart of darkness. But, you know what? I think this merely proves my point: the EUphiles have lost the rational argument on every front.

And, as I said before, all they have left is pathetic little insults. And I really hope that they carry on with such activities because, once people see the true colours of these fuckers, they will start to realise what unpleasant and, yes, desperate fanatics they are dealing with.

Bring it on, EUphiles: we've won the rational argument—we are happy for you to show off your irrationality and bigotry...
By Devil's Kitchen at March 14, 2008

Come on, the odd isolated incident of someone acting like a twat doesn't discredit the entire side, as well you know. Otherwise the eurosceptic argument would have imploded the moment the likes of Kilroy and Ashley Mote appeared on the scene.

Though, having said that, there does seem to be a bit of a tendency among certain unthinking pro-EU types to make this less than logical progression:

But that's really no more stupid than the hyperbole on the eurosceptic side where anyone in favour of the EU is a traitor, in the pay of the Commission, and probably a dhimmi and communist to boot. (And yes, I have been accused of all of those things...)

The term 'traitor' is the English word for a person who sells out his country to a foreign power. It is therefore an accurate term for the main politicians involved. Fellow travelling europhiles may just be accused of aiding and abetting treason.

Since the EU accretes power by stealth and lies, bribes national politicians with the Brussels gravy train, is corrupt, is not just un-democratic but anti-democratic, has no permitted opposition, purposely damages the environment, seeks to micro-manage us all with 'stupefying one-size-fits-all rules', etc, it is the EU that more closely resembles fascism/communism.