Get Darling Alastair banned from every pub in Britain! Click the image for an A4 poster for printing.

My erstwhile Edinburgh colleagues have been keeping up to date in the campaign to ban Alastair Darling from every pub in the land. The Reactionary Snob has a swift update of some pubs...

Utopia, Easter Road, Leith
The Plough Inn at Finstock, Oxfordshire
The Gardener's, Lewes
Two as yet unspecified pubs in Lewes other than The Gardener's.
The Queen Anne, Bolton

Well, as I reported, we have Patch's Bar in Devon and apparently there are three pubs in Denbighshire, and I have reliable reports of a few pubs in Lincoln too. Could we get names, please, and, even better, some pictures.

It has also made the City Diary of the Times, one of the campaign has been in contact with Al Murray to try and get him on board, Westbourne UKIP** are onside and Alex Johnstone MSP is in favour.

If anyone has a link to The Times story, that would be wonderful.

Meanwhile, my poverty-stricken Peloponnesian pal reports that the Edinburgh Evening News have picked up the story, and that several posters are doing the rounds.

AN internet campaign to get Alistair Darling banned from every pub in the UK has been inspired by a bar in the Capital.
Last week, the News revealed that Utopia on Leith Walk had put up a poster barring the Chancellor after his 4p per pint tax increase in the Budget.

The report prompted an Edinburgh-based blog, Musings of a Reactionary Snob, to call for the ban to be made nationwide.

The campaign has 110 supporters on its Facebook site, and pubs in Bolton, Lewes and Oxfordshire have followed Utopia.

Several posters have been designed—including one depicting the Edinburgh South MP as a Simpson's character in Moe's Tavern. The text says: "Finally Alistair Darling finds a pub he is not barred from."

Naturally, one should point out that this is not, as such, a "ban"; we are not using any legislation to ensure that Darling Alastair cannot get a pint in a pub. All we are doing is encouraging landlords voluntarily to bar Darling for fucking up their trade. 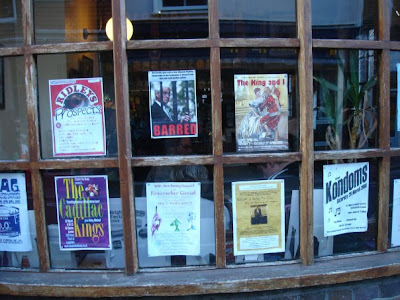 Mind you, we should probably do Gordon cocking Brown too.

BTW Did you get my LPUK poster suggestion?

The Campaign was featured on BBC FiveLive's new bulletin this morning.

It's a bit lame, all things considered. We should be lighting up our cigarettes en masse and telling any objecting health fascists that legislation passed by paramount war crimals and traitors is not valid legislation. Then point out that it's a fucking pub.

Well I never. Even Dave referenced the campaign in PMQ's. Can they be waking up a little?

Add "The Plough" at Sleights, North Yorkshire to the list!