Put Darling behind bars! Or in the windows of bars. Whatever.

The campaign to ban Darling from pubs seems to be gathering momentum. It has been mentioned on the BBC now: Matt Wardman has the audio snippet.

Do go and listen: I particularly love the reporter's tone of absolute seriousness. It made me laugh.

I believe that The Sun might also be looking at doing a wee feature on it, and the lovely Trixy has been running around delivering posters to bars in Westminster.

This one could run and run. 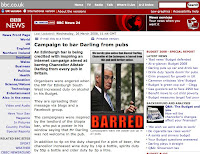 UPDATE: the BBC has a story on it and... my artwork! On the Beeb website! I'm so thrilled...

Cameron also mentioned the campaign at PMQs today; I shall try to get a clip of that.

UPDATE 2: my impecunious Athenian chum notes that the pub trade magazine, the Morning Advertiser, and The Grauniad also carry the story; The Telegraph does too, and notes that I have, somewhat embarrassingly, spelt Alistair wrong (I used Alastair) and I have now corrected that (I knew I should have checked).

UPDATE 3: for those of you not on Facebook, here are a few pictures that are currently gracing the Group page. 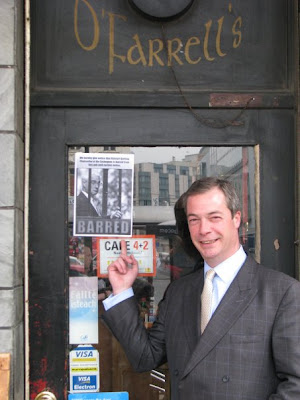 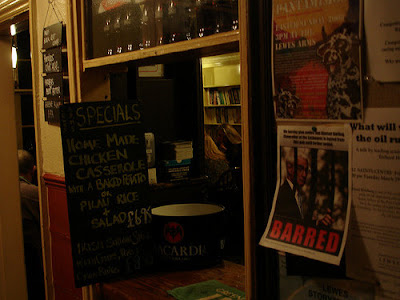 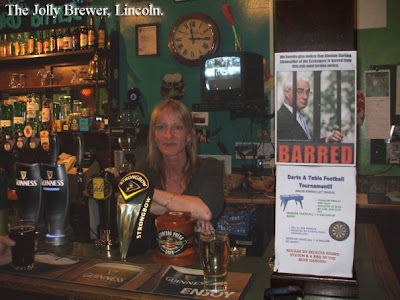 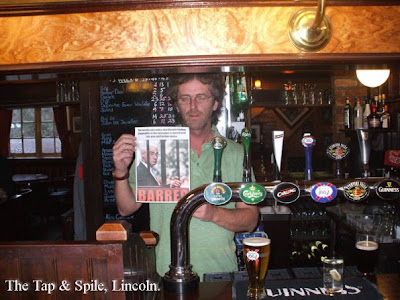 Darling, being the tedious turd that he is, probably doesn't actually go to pubs. But, as Mr E says...

I guess the lesson is this: in the age of the internet, you don't need to climb onto the roof of the Palace of Westminster or stand outside Downing Street with a loudhailer to tell your politicians what you think of them. All you need is a free blogging platform and a bit of time. Et voila! Alistair Darling is left in no doubt; everyone thinks he's a dick.

... which is, after all, the entire point of the exercise!

Oh, and I hope that the landlord of the Utopia bar gets lots of business out of it; after all, he's given us hours of entertainment.

What would be truly amusing, of course, if this off-the-cuff and whimsical campaign were the incident that really got blogs noticed...

UPDATE 4: the Morning Advertiser reports that the campaign has spread to Brussels (see the Farage picture, above), and they claim credit for starting the whole thing off. Hmmm...

The campaign to ban Alistair Darling from every pub has spread to Brussels.

The campaign, which originated on the MA forum and spread to social networking group Facebook, now has 410 members.

It's at almost 500 now. Obviously this has captured the public's imagination...

UPDATE 5: sorry for the lack of "serious" blogging; I have been stupidly busy over the last few days and have barely had time to sit down and catch up with everything.

However, The Sun has now covered this campaign.

FURIOUS pub landlords have set about barring Alistair Darling from every boozer in Britain.

Two hundred have put up posters warning the Chancellor to keep out since he slapped 4p on a pint in this month’s Budget.

The rapidly-spreading protest — which even includes a Brussels watering hole popular with MEPs — comes as it was revealed a UK pub shuts every six hours.

The Facebook Group now has nearly 1,100 members. The whole thing has gone a wee bit insane...

UPDATE 6: here's the clip of Cameron referencing the campaign at PMQs yesterday.


And that's the great thing: making sure that Darling knows about it!

I would have thought as the author of the end of the pub ,the working mens` club and your right to choose how to treat your own body Caroline Heart-of Flint was a better candidate for the novelty dartboard or pub bann.

It's now on the BBC Politics section

There is a tinge of bitter irony here, considering Darling probably couldn't give 2 hoots, having a private, subsidised bar in the house of commons.

Alex Johnstone MSP was interviewed today on Radio 5 Live on the subject. He is also in the Press and Journal newspaper on it and Sky news have been in touch too.

I expect they have a tax free annual £2000 drink allowance too.

I am a bit worried about this as I also have black eyebrows and white hair. Hope they look properly.

Bit of a laugh if someone could get it posted in the entry to the House of Commons bar.

I was thinking of doing that...

I shall have to bring my site up to date with this one, mind if I use some of these photographs (until South Shields is adorned with posters)?

Talking of taking pictures, I wonder what our humble Devil's view is of the illiberal attitudes these days?

Who is now recording the information on participating pubs? The Snob doesn't seem to want to take it on. Who has the time and resources to gather the data?

Good to see Nigel on the banned wagon!

In answer to TLA -

It is very difficult to know which pubs he has been banned in, to be honest. Many people just put up posters and that was that, some told me (hardly any as it happens), some told the Witenagemot Club, some (according to my son anyway) have recorded it on Facebook.

No one is doing this - I think the Morning Advertiser, being a magazine for licensees, is in the best position to gather data and actively wants to do so.

I think it's in the Metro this am. I left it on the train so I can't check.

So juvenile yet so poignant.

And now for our next campaign: Keeping Ed Balls away from schools and small children!

Just to confirm what Anon says, it was indeed mentioned on page 2 of today's Metro.

Well done Chris, did you do the poster? I didn't realise if so. Joined the Facebook group yesterday. Am a big fan of the Lewes Arms. You may be familiar with the story from last year (I'm almost sure it's the same pub, I'm winging it a bit here) when they got bought out by a big brewery (forget which one) which insisted they carry the brewery's beers exclusively. The people of Lewes boycotted the pub utterly (with the landlord's support) and they ran an national campaign in absolute penury until the brewery backed off. Great result.

Perhaps we could start to think about taking this to the next stage. Lets try to get ALL authoritarian bastards banned from as many private businesses as possible!!

They make up rules which affect us and not them, it's fucking time for us to start fighting back...

What an inspired campaign, DK, I love it! Reminds me of the campaign against Beeching's axe. Beeching became so despised for axing much of our train service that he was eventually forced to leave the country.

What a wonderful prospect...

I wonder if you would mind if the Stansted campaigners adapted your poster? Darling was responsible for the discredited SERAS report which advocated destroying large swathes of Essex with an unnecessary second runway at Stansted and a doubling of airline passenger numbers/taxpayer subsidies to aviation - by 2020.

The banned wagon starts to roll out across Bournemouth.
(Picture shows The Royal Oak and the Albion Inn)
http://www.westbournemouthukip.com/images/Banned-Wagon-3.jpg

Also, any chance of a version for our homes and car stickers, DK?

This is such a fabulous idea, it deserves to grow and grow.

DK - brilliant stuff, we need to extend it to Brown, like

I'd put that up on my front door!

The Morning advertiser have produced a new pdf: "Donkey Darling"

it's just been mentioned on the main trade magazine Harpers too (http://www.harpers.co.uk/news/5445/Ban-the-Chancellor-from-pubs.ehtml), now most pubs and bars will find out about it. They even put a link on to download the poster.

It might be time to ban Brown and Harperson from all houses too....

There's a photo on the front of today's FT that would provide a suitable opportunity for a new poster... as well as the usual Guido caption competition...

Another headline for pub windows to further the innocent merriment - the tagline: "Not tonight, Darling."

The BBC is wrong. The pub in Bolton hasn't put a poster up...yet.

My printer still won't work and I promised I'd provide it.

Cameron drinks in all the right pubs!

Iwas told they cannot smoke in the bars at the commons

If they've got any sense they'll extend this to the entire cabinet, and preferably the entire parliamentary Labour Party or indeed every last one of those useless buffoons who populate the green benches. It'd be a lot more effective to extend it to restaurants as well, so they can't feed their fat ugly faces at the public's expense while being bought by lobbyists.

It'd be a lovely to see a generalised boycott extending across all manner of businesses.

Why just Alistair Darling? If every pub barring Darling had posters barring local Labour politucians as well it would certainly put the pressure on Darling from them as they get criticised locally for supporting this.

Believe me. There's one thing that will make politicians put pressure on their bosses. It's local criticism of themselves and the threat of losing their seats.

Just to say I spotted the Banned poster in the Evening Star near Brighton station the other day - the campaign lives!