Balls: fuck me, but I hate you so very, very much 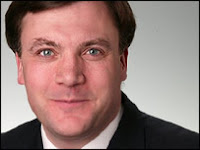 Ed Balls: this man is an unmitigated cunt. And not the good type of cunt, the kind that attractive ladies have between their legs. Oh, no. This man is the worst cunt in the world—a diseased, unkempt, unwashed, scabby, Polly Toynbee cunt, with big pointy fucking teeth. The cunt.

Those who have paid attention to your humble Devil's witterings over the last three years, and more, will have noticed that I don't have a great deal of respect for our political classes. In fact, I absolutely fucking loathe them: there are very few of them that I would piss on if they were on fire—not least because I would be the one who had wielded the highly-taxed petrol can in the first place.

The only reason to piss on a burning politician—especially a NuLabour one—is so that one might keep them alive, and in agony, for further hideous tortures (such as taking them to be treated at the Kent and Snuffit Hospital). As such, I have refrained from singling any one of them out for especial vilification in recent times; they are all so dishonest, stupid and unpleasant that there seemed to be little point.

However, as I watched the Budget the other day, I found that an event that allowed me to summon up, once again, the very personal bile required to give one turd sandwich a particular kicking. I shall let The Nameless One sum up said incident, in his post entitled, with admirable directness, The Budget: God, I hate them.

How about a little transparency in your accounts, Darling, you skunk faced cunt?

But what really, really pissed me off about the budget was not Darling. Rather, it was Ed Balls. Balls managed to sum up everything that is wrong with this government. How? When Cameron commented on the "highest tax burden in history" Balls replied with "So what?" That is the mindset of the people in the cabinet. The money you earn is not your money. It is actually their money, and they have the right to take as much of it as they want. You can argue against it, scream that it is not right until you are blue in the face. But that is what they believe. And it ain’t going to change whilst total fucking arseholes like Ed Balls darken the corridors of power.

There's not an awful lot that I need to add to that, but I am going to anyway. This man made his living in the private sector for a mere four years—as a journo. I loathe journos only slightly less than I loathe MPs, so this is not exactly a plus point. Ever since then he has been skulking around the Treasury, inventing fucking stupid phrases like "post neoclassical endogenous growth theory" and helping Gordon Brown to plan how to utterly fuck up the country.

Ed Balls is a self-serving little shit, and the Gobblin' King's evil familiar; he reminds me, mainly, of Grima Wormtongue, the Lord of the Rings character who poisons King Theoden's mind on the instructions of Saruman the White. When he is discovered, he is sent scuttling back to Brown Saruman; the wizard then treats him like something lower than filth—Grima fulfills the role of a particularly loathesome and unwanted pet who just will not fuck the fuck off.

Mind you, Brown had better watch out: eventually, it is Grima who murders Saruman, by slitting his throat from behind. Grima is then himself killed by the angry hobbits.

Now, that is a scenario—with Brown and Balls cast in their respective roles, and the taxpayers of this country as the hobbits—that I would love to see make the transition from fantasy to reality. Only, of course, the story would be entitled The Lord of the Wrongs.

But of course Balls couldn't give a shit about heavy taxes: MPs claim so many fucking expenses that it is a wonder that they need their big, fat salaries at all. And they are insulated from further uncertainty by their gold-plated, index-linked pensions, the greedy shits.

But, apparently this is not enough for Grima Balls and his equally odious wife and Cabinet colleague, Yvette Cooper. Oh, no: in the last pre-Budget report, they (and other MPs) got a handsome little dividend in the Capital Gains reorganisation.

If you own two homes you just got a handy reduction from 40% to 18% on capital gains. Is it a coincidence that almost all MPs own two homes? The constituency and Westminster home owners already benefit from a tax-free allowance worth £40,000 annually to pay their mortgages. Now they can sell the taxpayer funded second home and only pay the reduced capital gains - a 55% tax cut for MPs.

Mr and Mrs Balls are paid by the taxpayers quarter-of-a-million a year between them, so hard done by are they that they still claim tens of thousands extra in mortgage subsidy on top. Now with the new changes they will be able to sell that second home you paid for and they will pay only 18% tax on it. No wonder they are laughing...

Indeed. And there are some claims that the happy couple have quite gratuitously rigged their expenses to fleece us even more.

Mr Balls, Schools Secretary, and his wife, who is Chief Secretary to the Treasury, were accused last night of 'breaking the spirit or even the letter' of Commons rules by using the allowance to help pay for a new £655,000 home in North London.

Tory MP Malcolm Moss has complained to parliamentary standards commissioner Sir John Lyon, saying the couple had been able to "maximise" their taxpayer-funded mortgage payments by claiming the property was their second home.

So what the fuck does Ed Balls care if we are taxed more highly than ever, eh? The Balls household rakes in two fat salaries (paid for by us), has bought a nice big house in London (paid for by us) and has nicely minimised the amount of tax paid on it.

What the fuck do they care about taxes? After all, the abolition of the 10p rate of Income Tax only makes you poorer if you earn less than £18,000 and the Balls' are hardly near that, are they now? They probably take out of the bank and burn £18,000 a year just for a bit of a giggle.

So next time you are struggling to pay your rent, or your car tax, or any of your other bills—because you are being taxed to the fucking hilt—why not write to Ed Balls? No, really, do. I want to see if the little shit has the courage to write back to you and say "so what?"

And if he doesn't—I seriously doubt that he has the cojones—why not tear up his, no doubt, simperingly sympathetic yet dismissive missive and write back, reminding him of his "so what?" comment?

In the meantime, I will be scraping together the money to afford a couple of gallons of petrol; and I shall hold off going to the loo so that I can shoot a really good strong stream of piss straight into his blinky little eyes.

Ed Balls: you are a corrupt, lying, avaricious, shitty little bastard and I hope that you die in a piss and petrol mixed immolation. Fuck off.
By Devil's Kitchen at March 14, 2008

No, no, the saying goes thus; "I wouldn't piss down his throat if his lungs were on fire". Much funnier, and also more fun. Balls behaviour shows he doesn't give a shit about the electorate. 'We are the masters now' I think someone said in 1997. What a piss poor bunch of masters they have turned out to be.

As for me. I disliked the regime so much - I left the country.

And now we see him spinning to say that he said "so weak". Well, as a defence my friend that is so weak.

His "so what" phrase contains all that we loathe about these cunts and provides us with a short cut to describe them. An insult that surpasses insults. The Madmen couldn't have devised better.

This one will go down in history and will be used against Labour in the same way they used Margaret Thatcher's "there is no society" against her. That phrase at least had a context in which it could be explained and understood.

No, the Balls' phrase has the makings of a great smear. Whether it's true or not this one will stick.

What is so revealing is not simply his initial 'so what' but his attempt to lie his way out of it with his transparently untrue claim that he said 'so weak'.

No less than Brown, Balls is instinctively dishonest.

Ed Balls - or Ed Bollocks. The devils spawn who sucks the cock of Gordon and drinks from his foul left wing lefty spewing chalice.

Bascially he is trying to mould himself and create some sort of legacy ala Tony Benn and his soppy useless bastard son. Central to this is his partner and their plan to fornicate with each other (another labour fuckwit) with the ultimate aim of creating the "damian" of he labour movement.

Just watched that twat (Ed Balls) blame children's services for the recent abuse of those two young children in South Yorkshire. Correct me if I'm wrong, but aren't you the Minister for children?
Take responsibility you hateful little man.