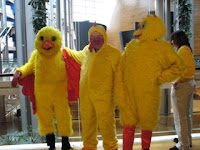 The Not The I Want A Referendum chickens...

It seems that the LibDems are under pressure from I Want A Referendum.

As I rounded the corner I saw a person dressed as a chicken standing at the LibDem’s entrance. The chicken was accompanied by two people handing out leaflets. Leaflets for what you may ask? I Want a Referendum of course.

It’s not easy being a LibDem; hounded by the press, mocked by bloggers and, perhaps worst of all, stalked by giant chickens unhappy with your failure to back a referendum on the EU Treaty.

Well, that's nice; however, I'm sure that I've heard about people dressing up as chickens and demanding a referendum in a public somewhere else.

The Lib Dems are now flapping about demanding a vote on whether to remain an EU member: