Guido lays out his manifesto, should anyone not have realised it, in this rather excellent post.

Your humble Devil, of ourse, has, and on a number of occasions. Methinks that Guido is too kind...

He does however have a suspicious mind and this is basically his default view until proven otherwise. It takes a certain kind of egoism to want to be a politician. The louder they claim it is because they "want to make a difference", the tighter you should grip your wallet. 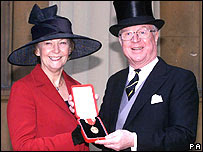 And Guido illustrates the petty ways in which this is true with his Sunday sleaze round-up. All of the stories are worth perusing, but the one that really grips my shit is the story about the Wintertons.

A husband-and-wife MP couple have defended their use of Commons expenses for a London flat, even though they paid off the mortgage six years ago.

Tories Sir Nicholas and Ann Winterton transferred their second home to a trust, to which they said they paid rent of £21,600 per year.

This is absolutely outrageous. Let me spell out the implications of this fucking corruption.

I cannot be the only one that thinks that this is absolutely beyond the fucking pale, can I?

I do have a fucking problem with MPs deliberately putting a residence into trust so that they can continue to claim our money when they would not otherwise have been able to do so: further, i have a severe problem with that money going to line the Winterton family pockets.

Yes, technically, they were perfectly at liberty to come to such an arrangement. But since when did we expect politicians to obey only the letter of the law? Could this pair of arseholes not see that what they were doing was in some way wrong?

Whilst what they are doing is technically legal, any fucking idiot can see that it is distinctly dodgy from a moral standpoint. And... just... fuck it, I object! This is snouts in the trough in the worst and most cynical way.

The couple said they had agreed the arrangement with the Commons Fees Office at the time it was set up.

In that case, the only conclusion seems to be that the Commons Fees Office is as corrupt and amoral, and blessed with the same total lack of regard for public money, as the Wintertons themselves.

This is an absolutely disgusting abuse of the expenses system: this money isn't yours by right, you fucking hideous pair of cunts; it's our fucking money. You did not need those expenses and you should not have claimed them. We allow MPs to claim expenses—the lord only knows why—in order to try to make your lives easier and you go and deliberately abuse it in order to enrich your family.

You fucking stink. But not as much as when your dismembered bodies are hanging from gibbets outside the Tower, the ravens feasting on your rancid flesh, you hideous, dishonest cunts.

We would like to respond briefly to the articles in the Mail on Sunday and other media covering the flat we use in London. Like any other employment which requires people to work away from home, living expenses can be reclaimed from Parliament up to a prescribed limit. In the late 1990s, we took advice from our solicitor and accountants about our likely inheritance tax liability, as so many families do. As a result of the advice given to us, we paid off the mortgage on the flat with the proceeds of a small legacy and an insurance policy which had just matured.

We were further advised to put the flat into a Trust for which there are three Trustees (our solicitor and ourselves) who administer the Trust on behalf of the beneficiaries. We no longer own the flat and in order to meet the objectives and terms of the Trust, we are obliged to pay the full market rent which is recommended by an independent valuer/estate agent. The current rent is not £30,000 per annum as stated in the press articles but is in fact £21,600 per annum.

Before we proceeded, the arrangement was agreed by the Fees Office and we clearly would not have gone ahead unless this had been the case. If we did not use our present accommodation, we would have to rent or buy other accommodation (for which legitimate expenses could be claimed as now) and there is, therefore, no additional cost to the taxpayer from the present arrangement.

More often than not we travel together by car off peak saving both on mileage allowance and very substantially on the high cost of rail travel. It is also a fact that we are both in the lowest quartile as far as Parliamentary expenses are concerned and we seek to use the allowances available as prudently and responsibly as possible.

So, basically their statement is: "if you don't let us continue enriching ourselves and our children at your expense, then we'll just find another way to do it."

What I object to is that the second home allowance has been used to permanently enrich the Wintertons. We have effectively paid the mortgage on a flat that they then get to keep: how can that be right?

I know that this may seem churlish but it just doesn't seem like cricket, somehow.
By Devil's Kitchen at February 04, 2008

I read that bob spink also has sticky fingers,but wether that is character assasination to prevent his activity on the referendum front,who can say,it is just such a pity that we can find no-one who is untainted to lead the referendum campaign.

Nobody with even a trace of a tesla remaining* in their moral compass would know that what the Wintertons have done is absolutely wrong and should not have even been entertained for a moment.

It is becoming clear that we have a vast section of the political classes who have no common sense, know almost nothing about anything, no moral compass, no ethical compass and very little grasp of reality. They are often self-loathers, traitors, cowards, bullies in turn and are only looking for their next well paid term of salaried unemployment.

The Wintertons should have the whip withdrawn and if they have any decency and even if they have NO decency, they should resign their seats with immediate effect.

't be tempting to stand in their constituency for a party which would remain nameless...

* I use this term instead of maxwell, as that might otherwise confuse matters....harrumph!

Agreed that this is outrageous and they ought to go, which is shame really, because they are better-off-outers. Bugger.

Well, fuck me gently sideways. Two, purportedly corrupt auto-wankothons do something about which you normally have no problems and yet..and yet, these must be seen as a pair of the most bastardly obnoxious low-hanging cunt-flappers yet to reside in tit Commons.

Verily, fuKING verily they must be strung up by their dual and various grabalicious genitaliae until they see the errors of their total and complete arseholism of the first order. etc.

Otherwise, they could leave the trust alone. Let the trust let the property for, say £21,600 pa and they buy another flat in e.g. London and claim expenses for said and then, say, leave it in their will to their sprogs.


I never thought I would find myself saying this but yer gannin saft Devil.

This allowance seems to be almost universally abused. They never appear to tire of our money.

To my mind the individual with the worst excuse for claiming his £17000 is one G. Brown the MP for Kircaldy & Cowdenbeath, I would have thought that after 25 years we must have paid off his mortgage. Besides, I have heard that he has a perfectly good house in London that he doesn't pay for.

For MP's Westminister is a place of work. When those of us with real jobs travel we are put in a hotel, 4* if we are lucky. So lets consider how much it should cost us.

You can get a 4* hotel in London for <£80, probably even lower if you bulk purchase. But lets assume £80. They work, lets say 100 nights in London, so that would be £8000. Some allowance for food, subsidesed HoC food, and they should cost us no more than £10k.

Its about time that these twats started understanding what it is like in the real world where we are under constant pressure to reduce all costs.

Let's assume that the rent of £21k pa is a fair market price for their London property.

They could easily have put said property into the family trust which could then have let it out to a third party for £21k pa.

The Wintertons could then have rented a similar property for £21k pa paid for by the taxpayer. Hundreds of other MPs do.

And, don't forget that in handling things the way they have the Wintertons have avoided the carbon footprint that would have been associated with a physical move.

What's all the fuss about?

Complain about the system by all means but it's most unfair to accuse the Wintertons of corruption.

They're all fucking disgusting pigs; I'd love to see every one of the cunts hanging at the doors of the town halls they represent as a warning to every other cunt who feels the need to represent the people... that the people have a limited amount of patience.

n other words, the taxpayer is subsidising the Wintertons' childrens' inheritance to the tune of £21,600 a year.

In defence of these two apalling racist, immoral, pompous and corrupt Tories, whom I have always hated since they were sprung from Thatcher's nether reasons - it seems to me that the rules are the problem. Nearly all MPs are human (except Redwood) and if dangled a carrot are almost certainly going to take it. Lets change the rules. Are bet there are loads of MPs bricking it at the moment - it seems total war has been declared by both sides at the moment -finding any snippet of greediness they can find - good!