A Rose by any other name would smell as putrid 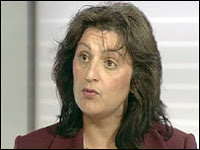 Rose Gibb: give her the money and then prosecute her under the full force of the law. That'll teach the bitch to take the fucking piss.

This has been sitting around in my Dock for a couple of weeks now, but it was so egregious that it has survived the winnowing process that I do from time to time. A little while ago, we examined the extraordinary financial arrangements of Rose Gibb, the Kent hospital manager who presided over the deaths of 90 people from Clostridium difficile and received a £75,000 pay off.

Seventy five fucking grand? For presiding over the deaths of ninety people? Who the hell is negotiating these fucking contracts?

Oh, and what happened to that idea of prosecuting company bosses for corporate manslaughter? Is that still around or does it not apply to public sector workers? This silly bitch should be fighting to stay out of prison, not being rewarded with tons of our cash.

Almost unbelievably, it was the very next day on which I saw this story.

The former chief of the NHS trust at the centre of a superbug scandal in which 90 patients died is to take legal action to increase her severance pay.

Rose Gibb resigned from Maidstone and Tunbridge Wells NHS Trust just before news of the C.diff deaths at the trust's three hospitals was revealed.

The trust decided, after taking legal advice, to pay her six months' salary of £75,000 in a severance deal.

Now her union has said she will reject the payoff and demand more.

But the trust said last week she would get her legal entitlement.

The union, Managers In Partnership (MiP) said its own lawyers had advised that Ms Gibb was entitled to the full sum originally agreed by the trust, which has never been disclosed.

So what is that to be? Well, figures such as £400,000 were being bandied about; as I said before, who the fuck is negotiating these contracts? Since when did we reward people for failure? The state seems to be absolutely incapable to being anything other than a Simple Shopper.

If there were any justice in the world, we would give this stupid fucking woman her £400,000 and then prosecute her for corporate manslaughter, under the laws which NuLabour brought in. Or, we would tell her to shut the fuck up and piss off.

Is rose Gibb one of the most shameless whores on the planet? I think that she may be...
By Devil's Kitchen at February 14, 2008

How about we give her C'diff?

If she survives she gets the money.

... as the travesty continues, she now sets up her own consultancy to advise the NHS on, yes, you guessed it, Efficiency!

They really have no shame at all, do they?

Contracts are contracts. Whether we like it or not, she should be paid what she is contracted for, otherwise this makes a mockery of our Rule of Law. I say let NuLab keep making these contracts and paying out for them. The more such cases like this that reach the public eye, the longer it will be until they are ever voted back in again...

And yes I agree with your analysis of the woman :)

I talked about that in my original piece and speculated that it would be a vehicle for paying her the full amount surrepticiously.

Ingram, you are right that we should honour the contract, but we shouldn't be making contracts in which someone gets a massive pay-off for being sacked. As I said, the state is a Simple Shopper.

I hope the relatives of those who died take Rose to the cleaners. The problem isn't with her contract. The problem is that she was allowed to resign two days before the damning report into her hospital was published. Hence no disciplinary action can be taken.

What's happening with the police investigation? Has it been quietly dropped to avoid setting a precedent that might lead to ministers being prosecuted?

My wife was put into the AIDS unit in a hospital because there were no other empty beds. There were blood stained dressings on the floor and blood stains on the walls. Vomit was left untouched for days at a time and the toilets had an insect infestation. This wont change until people start going to prison.

Even NHS contracts must say something about a duty on the contractee to do the job for which contractees are hired. Further, a court would (I hope) rule that a contractee must show a "reasonable" degree of competence in performing her task. Accordingly, either the trust should refuse to pay her anything and let her sue it under the contract or (if the trust is conniving at giving her a whopping and wholly underserved payoff) the trust should be prosecuted/sued for mal-(or mis-)feasance (a lawyer can explain the difference but it's connected with uselessness in public office).

Two companies fined over the Hatfield rail crash (which killed 4 and injured 102 travellers) were awarded £21million of taxpayers money, £7mil more than the fines they received.

It didn't seem to matter that Mr Justice MacKay described Balflour Beatty's failings (one of the companies involved) as,
'the worst example of sustained industrial negligence in a high-risk industry.

To cap it all Network Rail (aka Railtrack - the other company involved) paid its four top executives bonuses of more than £1.1million even though the firms debts have soared, and 1 in 8 eight trains run late.

I'm not a fan of the corporate manslaughter laws but, given that we have them, I don't think that they should not apply to the public sector.

Railtrack was just barely a private company and Network Rail certainly isn't. Yet the bosses of Railtrack were brought to court for Hatfield, and yet nothing has been done about the Cumbrian Virgin disaster.

Double standards, anyone? Or is it that no one working in the public sector should be held to account (because, of course, they are all wonderful little angels selflessly toiling for our benefit) as opposed to corporate bosses, who are all evil little demons hell-bent on murdering every single one of their customers for a couple of quid?

anonymous - my wife was put into the AIDs unit.

HIV cannot survive for more than a few seconds outside of the host - there has never been a case of patient to patient transmission of HIV just because two people happen to be in the same ward.

Critics demand "productivity' but in my view when patients are reduced to industrial units/treatment episodes the focus seems to be on getting as many punters in and out of hospital in the shortest possible time rather than quality of service.

Have you noticed how this fucking dog looks like Sylvester Stallone?

Ahh, but people in the 'public sector' were brought to book, Devil (for the C-diff outbreak in Maidstone & Tunbridge Wells).

The problems is they were the wrong people, x2 HCAs were fired while a nurse and HCA were disciplined.

Now maybe, these grunts deserved it, I don't know, but none of the teflon-coated managers were named and shamed, apart from Gibbsy, of course.

Mind you Rose had 'previous' for mismanagement, she was 'Operations Director' at Bromley - this hospital was criticised in an internal report for poor standards of cleanliness.
She then became Chief Exec at the North Middlesex Trust, which had the highest rate of MRSA infection in the country.

But that's what happens when you appoint ex-nurses into top management jobs, I'm afraid.

"But that's what happens when you appoint ex-nurses into top management jobs, I'm afraid."

Which is why I am highly sceptical of those who advocate that we should let the medicos run the NHS...

SO basically Rose gets paid off because she RESIGNS? If she resigns she should get ZIP. How can ANYONE have a contract that pays you off if you unilaterally back out?

You would think none of you had ever heard of a compromise agreement. No certainty there was one here, but it would be a good bet.

there is a certain degree of naivety here. The idea that managers of an NHS trust are fully autonomous and independent is scarcely believable.

One of the constraints that they face is direct "guidance" on a routine basis from Whitehall. Another is the professional autonomy of the professionals whom they employ to deliver competent advice- clinical governance anyone ?

So the idea that it is clear that this manager is incompetent is not proven. The idea that the government like to scapegoat people, getting favourable publicity, and behaving shamefully and duplicitously, is not exactly a novel thought here. In fact, it has been fairly clearly demonstrated on a number of occasions.

So why is DK swallowing the party line so very easily ? The government is blameless, and it is the poor manager ?

Who is that bloke?

One problem, which i'm certain the ever-excellent Dr. Crippen or Rant would point out is that C.Diff is only a problem in immune compromised patients and is present in the gut of everyone; just as MRSA is present up many peoples noses and is only a problem in similar circumstances or when it is introduced where it normally isn't (like in a surgical scar - similar to what happened to my wifes late grandfather after surgery to remove a skin cancer).

"HIV cannot survive for more than a few seconds outside of the host - there has never been a case of patient to patient transmission of HIV just because two people happen to be in the same ward."

There are 2 problems with what you say here - the first is the statement of HIV survival; HIV is a virus and thus does not have its own metabolism - the simplest definition of a living creature - it cannot die, only be broken down chemically or rendered inactive or copy itself in a host system. You learnt this at GCSE level biology (though I cant be too sure now, judging some of the scummy individuals coming out of the plonker comps up north). The second thing is that the anonymous gentleman does not mention a belief in patient-patient transmission through sharing a ward - only a rather (justified) alarm at contaminated bodily fluids being perfectly visible on a ward containing patients with HIV; what if his wife had had major surgery or was brought in after a major accident? The chances of infection would be much higher.

As for whether such an AIDs unit exists, perhaps it is a haematology unit inexplicably used for overflow from other wards?

The risk of environmental transmission of HIV is 'essentially zero'.