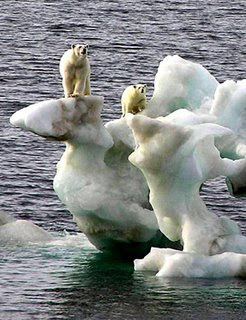 Two polar bears on an ice outcrop. Not stranded, because these hairy bastards can swim up to 100 miles without much problem. And the picture is by Amanda Byrd.

Via young Timmy, I come across this massive load of fucking horseshit from The Times.

Brandon Frazier, of the International Fund for Animal Welfare, said: “An endangered listing can affect the sell-off of the oil-drilling rights. That's why the decision on the polar bear has been delayed. They are trying to wait it out, get the lease sale through and then make the decision.”

Pictures of exhausted and emaciated polar bears clinging forlornly to shrinking ice floes have become icons of the global movement to halt climate change. Populations are in sharp decline, a trend that environmentalists blame on the shrinking of their sea ice habitats because of man-made global warming. Critics say that the global polar bear population, at 25,000, is far from extinction and question the human hand in their decline.
...

Listing an animal under the Endangered Species Act compels the US Government to protect it. If the polar bear were to be added to the list, it would create an extraordinary political and environmental precedent.

Yes, it would be an extraordinary precedent: to list a species at a point when its population is actively and massively increasing would be a somewhat perverse precedent, would it not?

For, as EU Referendum has continually pointed out, the polar bear population is increasing—and significantly.

A survey of the animals' numbers in Canada's eastern Arctic has revealed that they are thriving, not declining, because of mankind's interference in the environment.

"There aren't just a few more bears. There are a hell of a lot more bears," said Mitch Taylor, a polar bear biologist who has spent 20 years studying the animals.

As EU Referendum also pointed out, that classic images of the polar bears clinging to an ice outcrop—most memorably used by that fucking lying charlatan, Al Gore—was a classic issue of framing. Not only that but, with typical enviro-loon dishonesty, the picture was stolen from the original photographer.

The picture, wrongly credited to Dan Crosbie, an ice observer specialist for the Canadian Ice Service, was actually taken by Amanda Byrd while she was on a university-related research cruise in August of 2004, a time of year when the fringe of the Arctic ice cap normally melts. Byrd, a marine biology grad student at the time, was gathering zooplankton for a multi-year study of the Arctic Ocean.

Crosbie, who was also on the trip, pilfered the polar bear photo from a shared computer onboard the Canadian icebreaker where Ms. Byrd downloaded her snapshots; he saved it in his personal file. Several months later, Crosbie, who is known as an avid photographer, gave the photo to the Canadian Ice Service, which then allowed Environment Canada to use it as an illustration for an online magazine.

Today that photo, with credit given to photographer Dan Crosbie and the Canadian Ice Service, can be found all over the Internet, generally with the caption “Two polar bears are stranded on a chunk of melting ice”.

It’s a hoax, folks. The bears, which can swim distances of 100 miles and more, weren’t stranded; they were merely taking a break and watching the boat go by when a lady snapped their picture.

So, to return to the Times article and this paragraph...

Brandon Frazier, of the International Fund for Animal Welfare, said: “An endangered listing can affect the sell-off of the oil-drilling rights. That's why the decision on the polar bear has been delayed. They are trying to wait it out, get the lease sale through and then make the decision.”

Might I suggest that the reason that the US government is not listing the polar bear as an endangered species is not that they are in the pocket of "big oil" but instead that polar bears are not, in fact, endangered and are, indeed, actually thriving?

Enviro-loons: about as trustworthy as politicians. But less so.

Journalists: about as accurate as rumour blogs. But less so. I mean, seriously, don't these people have researchers?

UPDATE: Spiked also have an article on this.

Despite the steady growth of the polar bear population over the past 40 years—it now stands between 20,000 and 25,000—there is no shortage of doom-laden reports about the bears’ imminent demise on our warming planet. Some refer to polar bears as the ‘canaries of climate change’. Indeed, so strong is the misery-mongering about polar bears that the US is currently trying to list them as an endangered species; and its campaign has been aided and abetted by several pieces of US government-sponsored research into polar bear numbers. Yet according to experts in the field of forecasting methods, official rumours of the polar bear’s demise have been greatly exaggerated.

The first lamabasts them and the 'stolen photo'; the second attacks the US government for inaction.

It'll be fun to see whether they publish the non-PC diatribe, or the comfty-greenies 'I hate the US' rant...

"Populations are in sharp decline, a trend that environmentalists blame on the shrinking of their sea ice habitats because of man-made global warming. Critics say that the global polar bear population, at 25,000, is far from extinction"

Unless Polar Bears have evolved VERY recently, the hairy, vicious bastards (as a species, rather than individually) have survived a couple of ice ages and at least two times when the Earth was FAR warmer than it is predicted to become by the climate numpties.

The Yanks ought to spray the bears with Grecian 2000 from helicopters and let them move south and claim to be Grizzlies.

If I win the Lottery, I'm taking a breeding pair of Polar Bears to Antartica, just to see how they get on with the Penguins.

People are so gullible it is not true!

Polar bears live off seals. So what's good for seals is good for polar bears. The only reason that polar bears go out on to the ice to catch seals is because the seals are out there hiding from the bloody polar bears. In summer, when there's less ice, the polar bears just hang around on the beach until the seals come back to land.

"...when its population is actively and massively increasing"

You are being disingenuous. Of the recorded peopulations, some are in decline, some are increasing and some remain stable. Others, we dinnae know.

Still, why bother with facts when it's easier to put the boot in. Much like Lomborg claiming that Polar Bears can easily adapt to a Brown Bear-type lifestyle. I'm not sure how a PhD in Game Theory (or was it political science?) qualifies him to speak as an evolutionary biologist, but there you go.

Are you saying that overall the polar bear population is not increasing? Because I think that you may find that a little difficult to back up.

I'm the fellow who made the first comment; I'd posted an 'I agree with the Times' politically-correct comment, and a separate one calling the Times article inaccurate.

As expected, the former was published, the latter not:

"Man, I feel so sorry for those polar bears. I just wish the US government would wake up! "

I have noooo idea why the Times published my anti-US comment, while not publishing my 'polar bears aren't drowning' remark.

Can anyone enlighten me? I'm confoooooseeed....

DK: why, do you have access to comprehensive data? I am only suggesting that the situation is more complex than you make out. Nor do I doubt the staying power of Pleistocene fauna (though I find it to be a lazy argument).

Doubtless, you'll suspect his motives - but the paper ('melting under pressure') at http://pbsg.npolar.no/ by Prof Derocher (quoted in the Telegraph article) is a good summary.

"...I mean, seriously, don't these people have researchers?"

You mean their sons and daughters playing with Google...

What people do not realise is that the photo captures two bears midway through a rather riveting game of three dimensional chess.

If polar bears were indeed in danger they would not be spending their leisure time in such cerebral pursuits.

Polar bears look clean, soft and cuddly so they provide instant visual gratification for the "awww let's save the world from global warming" brigade.

Penguins however wouldn't be a good images as they look faintly silly while seals are good only for balancing balls on the end of their nose, thus sending the wrong message entirely.

I believe that Lomborg (a man who believes in climate change and uses the IPCC reports as data) has crunched the numbers on polar bears and shown that at worst, the numbers killed by the effects of global warming are much less than the number killed by poachers.

If these people actually cared about endangered species rather than trying to further political agendas (see also humpback whales), they'd be far more concerned about tigers.

Oh to hell with tigers. If we still had tigers in the UK, killing small children and our livestock, we'd soon get rid of them. Like we did with wolves, wild boars, bears.

So why do we look down on the poor Indian or Chinese farmer who is basically doing what we were doing several centuries ago? Tigers and polar bears are pests, FFS.

ursus whtsisname said: "Much like Lomborg claiming that Polar Bears can easily adapt to a Brown Bear-type lifestyle. I'm not sure how a PhD in Game Theory (or was it political science?) qualifies him to speak as an evolutionary biologist, but there you go."

Probably in much the same way that being the ex-vice president of the USA quailfies you as a climate scientist and filmmaker.

What polar bears?
There are no polar bears.Polar bears all died out during the medieval warm period.