The New York Times is getting its knickers in a twist about this graph; the headline accomapnying it reads, "Earth Scientists Express Rising Concern Over Warming". 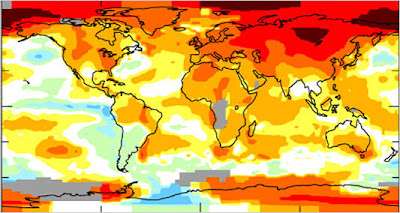 Now, I don't know who the author of the piece, Andy Revkin, is, but I assume that he is the work-experience boy; after all, I have heard that The New York Times is a half decent paper, so they wouldn't report this shit without offering any kind of comment, would they?

After all, there are some very obvious problems with this graph and Climate Skeptic points out some of the more, and less, obvious ones. I crave Warren Meyer's indulgence, as I reproduce most of them here for the delectation of readers of The Kitchen.

First, any idiot knows that that map is massively skewed. Look at the size of Antarctica for fuck's sake—it looks like it should be the most massive landmass on the planet: I mean, look at it in comparison to the size of Europe, above, and then compare it to the accurate landmass comparison on the left. Actually, it is only the fifth largest landmass, although it does contain 90% of the world's ice.

(Incidentally, temperatures in the interior of Antartica fluctuate between about -80°C and -90°C, so your starter for ten is: given that water freezes at a relatively balmy 0°C, how much ice melt will a 3°C rise in world temperature cause?)

Plus, of course, the shade of red makes the temperature increase look absolutely fucking massive (red! Warning! Warning, Will Robinson!) when, in fact, the increase is barely half a degree C.

The first graph, above, is labelled thusly [emphasis mine]:

The guy in charge of producing this chart, then, is our old friend, well-known climate alarmist (he was also at the forefront of the climate cooling scare in the 70s), conspiracy theorist and serial liar, James Hansen (see The Kitchen passim).

The next trick that Meyer highlights is typical Hansen.

Well, that really is a surprise, isn't it?

The next point is that the first graph is very complete, isn't it? Scroll up and have a look again. Those tiny wee grey areas are the bits that NASA/GISS claim that they have no data for, but they do have, apparently, accurate readings for almost the whole of the Pacific Ocean, for instance. Do you know how big the fucking Pacific is? It has a bigger surface area than all of the Earth's landmass combined and covers 32% of the planet's surface!

Meyer elaborates on this theme.

Some other gems of the original chart show the whole of Antarctica warming when the satellite evidence, and the "long" land station evidence backs this up. Remember that Larsson B iceshelf, the one that was breaking off and was the size of Shropshire or something? The one that was a harbinger of doom? Do you want to see how significant it is? Pinched from Climate Skeptic again...

Apparently so, yes. And certainly neither the reporters of The New York Times nor any other media seem to be bothering to actually question any of this "evidence". They just get spoon-fed it and, either because it fits their agenda or because they are fucking lazy fucks, they just regurgitate it without ever thinking or questioning the crap that is being slipped, warm and slippery as a turd-oyster, down their throats.

Which is why, after we have dealt with the politicos, lazy bloody reporters will be the next to dance the Tyburn jig. And then we start on the climate scientists because, whatever their motivations, they are lying to us and quite deliberately doing so.


* You'll remember that it was Hansen's records (NASA/GISS) that had to be corrected when Steve MacIntyre spotted some... ah... administrative problems. The result was that the 40s, and not the 90s, became the hottest decade of the last century. Hansen basically stated that this made no difference and implied that it was a conspiracy between MacIntyre and big business. Hansen is a lying, paranoid fucking cunt.
By Devil's Kitchen at February 01, 2008

Why not send this data to all the MSM propaganda rags and the BBC? Maybe some may just get around to reporting on it? NOT!
Anyway so what if they choose not to report the truth?
Temperatures are falling worldwide and even the AGW loonies cannot hide that(although they will try)
You might want to pop over to B-BBC and presnt this data to David Gregory BBC(science reporter) just to hear him um&ar Etc.

Keep up the sterling work my friend as for many of us proles blogs like yours are now our only reliable news source!

Congratulations. This is the first ever use of the phrase "turd oyster" on t'internet.

Excellent research and fisking as ever, but isn't this a bit old hat? Climate change scare stories(and the fisking thereof) is sooo last century, it's global cooling we ought to be worried about AFAICS.

Yup, more proof that climate scientists are ninnies and those who believe them are bubble-headed boobies!

In regard to reportage not being checked, note that they are allowed to use search engines such as Lexis-Nexis, basically a legal-matters search, and other pay-subscriptions - but not Google or Yahoo or Ask or... By and large, the self-proclaimed "seven levels of checking" consists of asking six other people in the office if the story is readable.

So, in areas where they have no direct experience (climate, foreign affairs/policy, economics, and nearly everything else) they tie their own hands to pre-processed handouts with little recourse.