Now, I'm not calling them Nazis but... 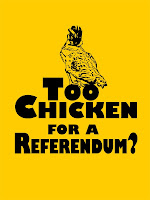 UKIPpers, and other EUsceptics, wore t-shirts bearing this image...

Yesterday, the European Parliament voted on and ratified the Lisbon Treaty European Constitution, passing it through by a large majority—although 115 voted against and 160 failed to even fucking bother to turn up.

As reported by Dan Hannan (newly ejected from the EPP-ED Group), the colleagues were very pleased with themselves.

The European Parliament has just voted through the European Constitution Lisbon Treaty by a margin of 85 per cent to 15 per cent. After the vote, the Speaker solemnly announced that the vote “gave expression to the will of the citizens of Europe”. I would have assumed he was joking except that a) he is German and b) MEPs are forever coming out with this sort of humbug.

The chamber, needless to say, burst into thunderous applause. Euro-MPs love to be told that they speak for the people. It makes them feel better about the fact that the people keep voting “No”. It reassures them that they are not alone.

Trixy reports that the Colleagues were not tremendously keen to let those UKIPpers dressed in chicken suits into the actual Parliament chamber (the "hemicycle").

And I was leading three large chickens along towards the hemicycle.

It's a simple message to grasp: politicians are too chicken to let the people have a referendum as they will say NO, and then they have to go through the inconvenience of asking them again until they say yes or writing it up in different font and pretending that it's different.

Last month the Green group were allowed people dressed up on the bridges to the hemicycle. They were wearing tomato costumes and other assorted vegetables. If they're protesting at nuclear power they can wear death masks, but if you're asking for democracy, then you are forbidden from doing anything.

The Head of Security even tried to convince us that it was clearly written in the Rules and Regs that 'No person is allowed to wear a chicken outfit in the European Parlaiment'. When asked to show this regulation they declined. 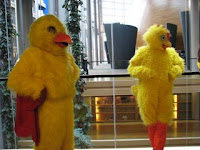 Elaib gets smartly dressed up...

But I think that England Expects takes the biscuit with his reporting of the attempted shut-down of the media by EP authorities.

Nigel Farage appeared and was interviewed by a freelance journalist. As that interview finished a woman called Anne-Margrete Wachtmeister, who is the Head of the Audio Visual Unit in the Parliament which describes itself thus,

Audiovisual Unit, which provides services and products to the audiovisual media in order to facilitate its coverage of the EP

Wachtmeister to the journalist, [Emphasis mine—DK]

"You should not broadcast that interview".

"Why?" said the shocked hack.

"Because the film crew are employees of the Parliament and they should not be used to film dissent".

This exchange was overheard by Shireen Wheeler, the presenter of the BBC World "Record" program that covers the Parliament.

She threatened to block all further BBC coverage of the Parliament in Brussels and Strasbourg if this attitude was not corrected.

The Parliament backed down.

Hooray for Shireen Wheeler: the only honest BBC employee? Certainly the only one with a fucking backbone.

But the thought that the Parliament even considered this is scary. Remember that the European Commission are planning to vet journalists. The European Parliament is building a TV station over which they have editorial control.

The President of Parliament has gifted himself arbritary powers over the rules of procedure.

Does all this remind anybody of anything?

Gosh... um... Well, I wouldn't like to pin it down to any one particular bunch of hideous, mass-murdering, totalitarian bastards: let's just say that the whole thing is slightly scary.

Still, I suppose that it is all entirely justified when these evil EU sceptics are "sowing the seeds of division and [being] generally destructive."

After all, we wouldn't want any division would we? We must all be united, whether we want to be or not, under the benign guidance of our Lords and Masters in the EU.

Yes, ladies and gentlemen, we must prepare for the glorious day when we are Ein Volk: it is for our own good and we will all be far better off and if you don't agree then you must be... dealt with, for the good of humanity.

When that fine time comes, we must never forget to keep the concentration camp home fires burning...
By Devil's Kitchen at February 21, 2008

Wachtmeister is German for Master of the Watch (not wristwatch type, night watch type). So an appropriate name. Although better if she was called Wachtmeisterin.

I thought the EU already ran Euronews. Endless programmes on how lucky we are to be in the EU. I did email them once to find out who was funding them but they didn't reply.

Unusual of a BBC employee to show so much backbone. Bet she got told off afterwards!

"Bet she got told off afterwards!" No doubt - and (if and when) she won't pass the vetting procedure either.

Well said Mr. DK. One correction, though - let's face it, they ARE Nazis, aren't they!

Is there a source on that Green prick's "mentally ill" comments? I have one particular Greeny lefty fuckwit down whose throat I want to shove that quote.