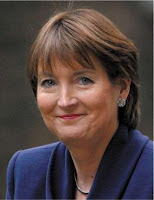 Ding dong: the tedious old witch is still not dead. In this case, no news is bad news...

Via my impecunious Athenian friend*, I stumble across this execrable interview with Harriet Harperson; apparently The Independent have a regular feature wherein politicians answer fatuous questions emailed in by Independent hacks using assumed names in a desperate attempt to convince people that anyone reads their fucking rag readers.

There's some real corkers here, I can tell you.

Why has Gordon Brown made such a poor job of being PM after waiting so long for the top job?
Henry Darlow
Richmond

[Harperson:] Before he was PM, Gordon wasn't just waiting around – he was being chancellor and sorting out the economy.

Aaaaaaaahahahahahaha! I think that what you meant to say, love, is that he was being chancellor and busy flogging off the family silver, constructing unbelievably damaging PFI deals, spending money like water and generally setting the scene for the economic downturn that is going to hit this country like a fucking tyre-iron upside the head, the monocular Scots cunt.

After Iraq, Afghanistan, Northern Rock, the missing data disasters, cash for honours, the David Abrahams affair and Brown's dithering about a general election, could we trust New Labour to organise a party in a brewery?
Jim Miller
by email

[Harperson:] After full employment, low inflation, doubling aid to the developing world, better schools and hospitals, higher pensions and free travel for pensioners, longer maternity leave and more nurseries ... we are too busy to be organising a party in a brewery.

I think that it is fair to say, Harriet, that any attempt by your party to organise a piss-up in a brewery would turn to a stinking pile of shit—just like everything else that you've touched.

PMQs have become irritatingly, if not degradingly, banal. Can some dignity be instilled?
John Romer
Ealing

[Harperson:] Not while David Cameron just uses it for playground taunts.

It seems that you aren't above making a few playground taunts yourself, eh, Harry dearest? Although I imagine the irony of your response will have escaped you: go fuck yourself, you unspeakable harridan.

[Harperson:] Hero of the left – but time for Cuba to move on.

What the cunting fuck? That was my first thought upon reading this; obviously, Mr E was struck by the same reaction.

If the deputy leader of the Tories had praised Augusto Pinochet as a "hero of the right", he'd have be sacked by lunchtime.

But then I thought about it for a little bit, and now I think that her answer is entirely consistent and even, from her point of view, completely reasonable.

After all, a dangerous authoritarian dictator is obviously going to be a hero of the left; there is no dichotomy here—as far as Harriet is concerned, the two options are entirely synonymous.

Fuck me, but she's such a loathesome individual, as well as being possessed of a face that one would never, ever tire of slapping.

But this last one is a real cracker.

How many of the MPs in your party are honest in their financial affairs?
Peter Dickinson
by email

[Harperson:] I don't know of any that aren't. If I thought anyone wasn't, I'd report them.

If I recall correctly, the word that I am searching for here is chutzpah. I mean, I have always said that most MPs are utterly lacking in self-knowledge, and it seems that Harriet, additionally, really doesn't know of herself. Which is interesting.

Let us revisit some of your humble Devil's comment on her recent financial record, shall we?

That this poignant vignette has not been played out only serves to irritate me further.

Ah well, the cockroaches are nicely sharpened and Igor is, at this very moment, prodding the increasingly enraged candiru fish with a pointed stick...


* A few other people covered it too. But, as seems to be becoming a habit with some, they didn't link to the story, so they get no link from here. It's a new policy that I'm instigating: no blogger is so important that they can get away with not being arsed to link to their sources. How else are people to know that you are telling the truth, or not skewing the story?
By Devil's Kitchen at February 26, 2008

I don't have the figures to dispute the aid comment - and aid should be measured in quality not quantity but WTF?

Full employment? What country does this vapid bitch live in? Let's, for the sake of the argument, assume that everybody on Incapacity Benefit is legitimately unable to work. So, from the Office for National Statistics, a Government body:

Err, so not "full employment" then. What about low inflation?

From the ONS again, we find that the RPI is at 4.1% - higher than during the fairly disastrous Major years.

"Better schools and hospitals" - you egregious fucking liar. I am sorry but you should be taken out and shot. More money, yes. Better results, NO! This, MRSA and c.diff.

Hanging is too good for you. Can I humbly suggest we need to raid the parliamentary pensions (and Speaker's wife's taxi) budget, rent Guantanamo (sp) from the Yanks and PPI running the prison to Raul.

Evil,
She lives on planet Nu Labour, a parallel universe where Fidel Castro is a champion of 'uman rights and politicians being such honourable members can steal, cheat and fiddle whatever the fuck they like from the taxpayer.

The next stop in this magic universe is planet EU, where the money flows like vintage champagne and there is absolutely no accountablity to anyone at all, ever as to where it goes.

Time for Cuba to "move on"? You mean shit on the people they wre supposed to be sticking up for, like New Labour did?

Just thinking about this cow is enough to put me back on the cigarettes.