Via The Englishman, it seems that the MSM is continuing to peddle this "climate change is settled" idiocy; this time the set in stone idea is being peddled by some moronic Times columnist called Anjana Ahuja.

But the status of victim is popular among the dwindling numbers of climate-change deniers, largely because they cannot fall back on the comfort of facts. That's because the facts, as best we know them, come courtesy of the peer-reviewed science that Cockburn so despises. Everything else is opinion.

Um, yes, the facts do indeed come from peer-reviewed science, this is true. However, peer-reviewed science is not only often wrong but, in this case, specifically is wrong. The entirety of the global warming theory is predicated on (fudged) computer modelling and inaccurate data.

What about CO2 as a driver of climate change? 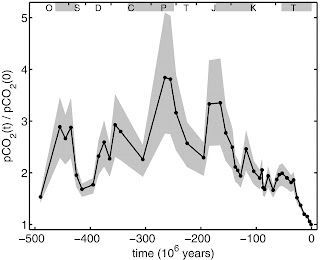 In all the political brouhaha over ‘global warming’, and despite the 35 per cent rise in the concentration of atmospheric carbon dioxide over pre-industrial conditions [from 1832 ice-core records of c. 284 ppmv to c. 384 ppmv in November, 2007), we too often forget that atmospheric CO2 levels remain at their lowest for 500 million years.

The above graph [a larger version (165 JPEG file) is available here] has been taken from ‘Atmospheric carbon dioxide levels for the last 500 million years’ by Daniel H. Rothman (Massachusetts Institute of Technology), published in Proceedings of the National Academy of Sciences 99 (7), April 2, 2002, pp. 4167-4171. The graph shows the fluctuations in the partial pressure of atmospheric CO2 (pCO2) over the last 500 My (million years), employing certain methodological improvements introduced by Rothman in his paper. The grey bars at the top of the graph represent cooler periods in the Earth’s history; the white spaces between are warmer periods.

It's worth reading the whole of that post in order to understand how those warm periods relate to CO2 (or, rather, don't particularly). Still, we may not have to worry anymore anyway, since global warming seems to have... well... stoppped. 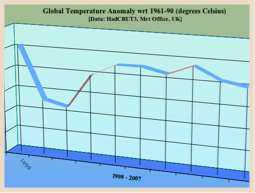 I think you may find the little graph I have just produced ... of interest. It illustrates an intriguing mini-phenomenon: since 1998, ‘global warming’ appears to have—wait for it—stopped. The data is taken from the UK Met Office’s ‘HadCRUT3’ dataset, a globally-gridded product of near-surface temperatures, consisting of annual differences from 1961-90 normals. The full data set is available here, covering the period from 1850 to the present. The coloured ribbon shows the best estimate data from this set. But, what does it mean?

Of course, little can be gleaned from such a short data run of only 10-years [“‘Global warmers’ also please note, thank you”], but the temperature anomaly has clearly dipped, and then flat-lined below its 1998 anomaly peak - and for nine years now. In other words, since 1998 there has been no global warming [not even any ‘global warming’]. Yet, atmospheric CO2 has continued to rise, from c. 368 ppmv in 1998 to c. 384 ppmv in November, 2007... Moreover, politicians persist in claiming that temperature is rising faster than at any other time in the history of the whole Earth... but then, we always believe our politicians, don’t we?

Well, idiot MSM reporters like Anjana obviously do. If Anjana thinks that there really is no argument about this whole anthropogenic global warming theory, perhaps she would like to search The Kitchen for "climate change" or even just click on that convenient "environmentalism" label?

Why not give it a go, Anjana, you smug and patronising but simultaneously clueless prat?—you might just learn something...
By Devil's Kitchen at February 04, 2008

Well, yeah, ok. But you'd still give her one though wouldn't you.

I would. No, I lie - I'd give her both. Assuming that photo is of her herselfness.

Which models do you think "fudged" and in what way?
Also, I presume that you have read this?

Depressingly, the woman appears to have a PhD from Imperial... All I can assume from that is that, like "A" Levels and Bachelor's Degrees, they're a lot easier to get now than when I was doing same!

Madamemoiselle Ahuja looks quite intriguing if a little arrogant . One wonders if - - - -

OMHO there is something in the greenie argument buts its mainly bollocks . The sanctimonious aggression of their level of debate makes one suspect it is basically religion not science .

Keep up the counterattack DK .

Call me picky, but personally, if there's one thing I simply cannot stand it's an ill-informed moron. Or someone who likes to believe three impossible things before breakfast. [Man-made climate change, global warming, melting ice caps.]

Sorry to crash your burn the planet picnic, but who would you rather believe DK or New Scientist? Actually don't answer that, just read this from New Scientist - it repudiates all this CO2 wackery from DK.

Given that The New Scientist still uncompromisingly endorses the Stern Review (which has been ripped to shreds by scientists (rather than journalists posing as scientists)), I will go with my sources, thanks.

Its bafoonery to argue against climate change because its actually happening. The real debate is whether its man made or is it a normal course of this planet.

Neil,
I couldn`t see any of the `new bullshitters`points tackling the fact that global warming hasn`t happened since 1998,
Honestly `new scientist` now wash your hands please.