Being a vain man, your humble Devil does love to be praised but, more even than that, he just loves being fucking right. And your humble Devil is going to be proven absolutely correct on this whole anthropogenic climate change nonsense.

EU Referendum happily sums up some of the more recent stories.

This, ostensibly, is on the back of a US Geological Survey prediction that it will fall by two-thirds by 2050 "if the Arctic ice where the animals live continues to shrink". But the real story is about environmentalists using concern for these animals as a means of blocking oil and gas exploration rights off the Alaskan coast. To that extent, polar bears are to American Greenies as newts are to ours - an excuse to close down vital development, irrespective of the consequences.

This is interesting because, as Global Warming Politics notes, many polar bears are starting to encroach on human populations because there is too much sea ice.

Apparently, according to a report [...], Svend Erik Hendriksen, a certified weather observer in the Kangerlussuaq Greenland MET Office, who is responsible for all the weather observations at Kangerlussuaq Airport (near to Sisimiut), says that the cause is too much sea ice:

“Several polar bears located (at least 6) close to Sisimiut town on the West coast ...Too much sea ice, so they are very hungry...Error number 36 in the movie An Inconvenient Truth Al Gore says the polar bear need more ice to survive... Now we have a lot of ice, but the polar bear is starving and find their food at the garbage dumps in towns. It's also influence the local community, polar bear alerts, keep kids away from the schools and so on.... The first one was shot at February 1st.”

Indeed, far from the Greenland ice-sheet melting, it is at immensely high levels (hence the encroachment of the bears).

The ice between Canada and southwestern Greenland has reached its highest level in 15 years.

Minus 30 degrees Celsius. That's how cold it's been in large parts of western Greenland where the population has been bundling up in hats and scarves. At the same time, Denmark's Meteorological Institute states that the ice between Canada and southwest Greenland right now has reached its greatest extent in 15 years.

'Satellite pictures show that the ice expansion has extended farther south this year. In fact, it's a bit past the Nuuk area. We have to go back 15 years to find ice expansion so far south. On the eastern coast it hasn't been colder than normal, but there has been a good amount of snow.'

Coupled with record ice thickness in Antartica, I really cannot see any of Al Gore's ridiculous assertions even coming anywhere near being true: we certainly aren't looking at a rise in sea level of 20 metres, as claimed in An Inconvenient Truth.

And what might be the cause of all of this cold weather? Well, once more we turn to EU Referendum, who have highlighted a few problems with that big, old ball of fusion in the sky. 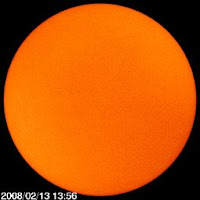 ... you have the whatsupwiththat site telling us that the sun has gone quiet. Really quiet. There is almost no significant solar activity - we've seen months and months of next to nothing, and the start of Solar cycle 24 seems to have materialised then abruptly disappeared.

Given the current quietness of the sun and its magnetic field, combined with the late start to cycle 24 with even possibly a false start, it appears that the sun has slowed its internal dynamo to a similar level such as was seen during the Dalton Minimum.

No wonder there is so much talk recently about global cooling. Some say it is no coincidence that 2008 has seen a drop in global temperature compared to 2007.

Naturally, the "climate experts"—no doubt fearing for their research grants—are becoming a little desperate, informing us that this cold snap won't last and, even if it did, it's caused by AGW anyway so, please, don't take our money away—pretty please.

In the meantime, all of this seems to have rather passed by our politicians, who are still eagerly dreaming up new ways to curb our lives and destroy our economy. The lastest piece of stupid, knee-jerk authoritarianism is from Phil Woolas, to whom I have not turned my attention before but who obviously deserves a fucking kicking of the very hardest and most sustained type.

Drinking bottled water should be made as unfashionable as smoking, according to a government adviser.

"We have to make people think that it's unfashionable just as we have with smoking. We need a similar campaign to convince people that this is wrong," said Tim Lang, the Government's naural resources commissioner.

Phil Woolas, the environment minister, added that the amount of money spent on mineral water "borders on being morally unacceptable".

Do politicians seriously lack such self-knowledge? That any politician might lecture anyone else on morality is, frankly, hypocrisy of the very first (bottled) water. That any politician should attempt to force his personal morality onto everyone else is merely indicative of the evil inherent in this statist government.

And don't even get me started on Prince Charles; I'll turn you over to Harry Haddock for a suitable rant.

One of the alleged benefits of the Monarchy is that they provide a non-partisan head of state, aloof from the tribal nature of politics. To achieve this aim, and thus to be held in reverence as a monarch, they need to steer clear of making political statements.

A case in point is the fuss over UKIP leader Nigel Farage, who refused to stand and clap Prince Charles after he gave a speech in Brussels. By making a political statement, one cannot stand and applaud if you disagree, or you are a hypocrite. By being partisan, you can no longer be held in reverence as a monarch (to be), lest you are arguing a return to a feudal system where the King has his say and no discussion can take place.

Quite so. Still, where one stupid heir to the throne can look like a jug-eared arsehole, there is always a LibDem waiting in the wings to make even more of a tit of himself.

UKIP seem to have shot themselves in the foot (again) today by refusing to stand at the end of Prince Charles speech to British MEP's [sic] in Brussels.

Apparently UKIP's refusal to stand was because the Prince was apparently advocating a widening of EU powers. UKIP apparnelty [sic] missed that this was in order to protect the environment, but hey, to hell with the environment, UKIP care little for that.

I should point out that I will often correct spelling mistakes in pieces that I quote; I have highlighted this spelling mistake and the egregious misuse of an apostrophe because Nich Starling is, according to his profile, a teacher.

Unfortunately, he is also a fucking idiot who is, apparently, unable to see that it is utterly inappropriate for the heir to a constitutional monarchy to get involved in politics. It is certainly inappropriate for the heir to the throne of Great Britain to demand that this country cede yet more powers to an unelected bureaucracy in a foreign country.

Still, maybe Nich and Charles could start a double-act: perhaps they could call themselves The Totally Fucking Ignorant Duo?

And, in the meantime, whilst the Green religionists bury their heads in the ample amounts of snow— when they aren't planning a totalitarian regime, that is—the death toll continues to spiral in China, Aghanistan, Iraq and many other places, as the snow continues to fall.

Now, notwithstanding that polar bears are nasty pests, warm water is good for fish etc etc.

Jesus, AGW is now so bad it is even affecting THE SUN!

And you just sit there and claim it isn't happening? Shame on you!

I've just read that Northern Hemisphere Sea Ice is at it's greatest extent for fifteen years, and Woolas is an arse of the first degree.

Last time I looked Chester zoo had polar bears..that will do for me.

Rob: You can't be serious? Did we have AGW back in the 16th century too?