An EU think-tank, Global Vision, have released the results of a new poll.

A new Global Vision/ICM poll finds that 74% of those surveyed still want their say on the EU Reform Treaty in a referendum.

Furthermore, when asked who should control specific policy areas, respondents were overwhelmingly against the European Union. This includes policy areas—such as trade and agriculture—where the EU already has exclusive competence to control policy, as well as those—such as Foreign Affairs and Defence—where the new Treaty envisages the EU playing an increasing role.

"For each of the policy areas, do you think they should be controlled by the EU or the British Government?" 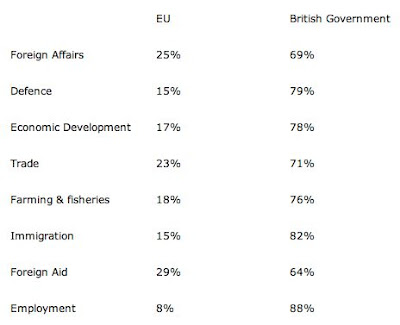 This survey is very welcome to EUsceptics, although ultimately futile. Unfortunately, as I have pointed out a number of times (not least in the comments to this Redwood post), a looser deal is an arrangement that simply is not on the table. Having a looser arrangement means leaving the EU, it's that simple.

The European Union is a political construct: dumping the politics and keeping the free trade is not an option whilst we are in the EU because the EU is the damn politics. The free trade area was essentially a carrot, to lure the prey countries in, that's all.

With the benefits of the free trade area now a bit dubious, the EU is using pure financial bribery (in the form of "regeneration grants" and suchlike) in order to reel in yet more countries to feed its near insatiable appetite for control.

What Global Vision is attempting to do is simply not an option: if you are in the EU, you are part of the political union. It really is that simple.
By Devil's Kitchen at February 06, 2008

Methinks you are overlooking Article 7a.

When the Southern States left the Union it led to the American Civil War. They had a common currency and a federal structure.

I have corresponded with Mr Redwood, via his site, on this very issue. So long as we remain within the EU we are going to be subject to EU rules. Governments of whatever stripe can twist and turn on EU diktats and then shit and stamp in it, but the EU will previal.

Hence, if we truly wish to be a self-governing nation again we must leave.

None of the 'big three' well big two and one half parties will pledge to this so one is left to look at UKIP or the BNP. I am not inclined to view someone's contribution to the country, or their worth as a person, based on the colour of their skin so that rather leaves one party to vote for on the anti EU platform.

The "Exit Clause" in Lisbon (copied from the EU Constitution) requires us to ask to leave. The EU then decides, without us being involved in the negotiations at all, to set what conditions it wants. Since we are one of the top two cash contributors to the EU coffers, what bets on the conditions being draconian?

Currently we could legally leave when and how we want with no penalties imposed by the EU, simply by repealing the 1972 European Communities act.

So we only have a few months of freedom left.

Next, Dr Watson remarks to his crime-fighting partner the fact that there is a lack of manure in the vicinity.

The EU is not a free trade organisation, its a protectionist bloc! Since joining the EU we have been forced to move towards even more protectionism due to such things as the common agricultural policy. If we want free trade we should abolish all import duties/tariffs and end all government protectionism.

Interesting suggestion on The Huntsman's blog. If the Gang of Four get the Labour whip withdrawn for voting against ratifying the Articles of Surrender, then why don't they resign their seats and stand in the subsequent bye-elections as Independents on a pro-Referendum ticket?

From DK's stats - 71% of Brits want to remain in the EU (albeit some of them want changes to its structure - well I do as well and there is nobody more pro-EU than me so what does that stat prove?). And it is possible that well over 50% want at least one of the policy areas run from Brussels. This is hardly good news for you antis is it?