I have been challenged, by Curly's Corner Shop, to publish my Political Compass results.

I have taken this test a few times over the years, and have always ended up in much the same position. However, I should say that I do not like the test particularly consisting, as it does, of a range of answers (from Strongly Agree to Strongly Disagree) to questions that are often false dichotomies.

In this way, one is often forced to agree or disagree with a situation that one might consider utterly irrelevent, with a lack of information on how these ideas might be achieved; similarly, the questions often lack a further nuance which would allow one to decide more accurately. Like most tests of this sort, it is a function of the prejudices of those setting the test.

However, it is better than most; all I am pointing out is that I do not ascribe to it the near-mythical status that some do. Anyway, given these caveats, here are my results. 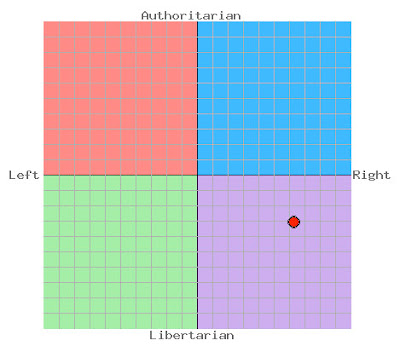 There's no real surprises there, I don't think, apart from the fact that I may not be as socially libertarian as some. As I said above, I ascribe this to some slightly dodgy questions on that score.

For instance, apart from the drugs issue mentioned above, on the question of whether schools should insist on classroom attendance, I agreed. But I do not agree that the state should force people to attend school, only that schools, as businesses, should be able to set their own criteria on those who attend them. If people choose not to attend school, that is their business.

As usual with these things, I am not going to pass it onto ten others: however, should anyone wish to take up the baton, feel free.

UPDATE: commmenter red and white is a little surprised.

Surprisingly I came out on the left, yet I'm a BNP supporter.

How dryly would you like me to ask, "is anyone surprised"?

As I and others have consistently pointed out, the BNP is collectivist and authoritarian and is thus of the authoritarian socialist persuasion.
By Devil's Kitchen at January 15, 2008

I took that test and didn't think it was very good (although I ended up roughly where you are).

There is a better one somewhere where the two axes are labelled 'economic' and 'social', each having a 'libertarian' and 'authoritarian' extreme. I ended pretty much towards the libertarian end of either axis.

You are right about the schools question. Some of these tests also have questions like "do you think that some people are natural leaders and others followers," to which yes might be a reasonable answer. However, statism does not follow from that as the test writers seem to assume.

Took the test and came out roughly where I'd expected - Libertarian Left (-3, -7.9). The most striking thing to me is their estimation of where the big world leaders stand; only Mandela and the Dalai Llama on the side of Libertarianism! And that's abit far-fetched as his Holiness has more to answer for than most people would suspect. Interesting stuff.

I'm less to the right and more to the libertarian...

That said, on some of the questions, the accurate answer would have been "indifferent". So, not really very accurate.

You are right devil, its a bunch of bollocks.

Like most tests of this sort, it is a function of the prejudices of those setting the test.

Well, quite. There is, for instance, a question about immigrants: "First-generation immigrants can never be fully integrated within their new country."

Now what the hell am I supposed to do with a question like that? I can only assume that those who disagree will be counted as social libertarians, while those who agree will be considered social authoritarians.

The problem is, I am an immigrant. I moved to Britain a decade and a half ago, and while I may be comfortable enough in my adopted culture I know damn well that I will never, ever share the cultural heritage, with all the assumptions and baggage and shared viewpoints and so on, of my fellow citizens.

So does theory trump experience or vice versa?

"A significant advantage of a one-party state is that it avoids all the arguments that delay progress in a democratic political system.""

Well yes: it IS a significant advantage. The question is - or ought to be - to WHO, and is such an advantage desirable?

"Charity is better than social security as a means of helping the genuinely disadvantaged."

That's not the point either. It's not the effect on the genuinely disadvantaged that is the issue.

And the overall chart is COMPLETELY screwed. Communism is not just left - it is Authoritarian Left. The axes suggest that Communism is about as socially free as neo-liberalism which is dog doo of the pungent type.

And for the record
Economic Left/Right: 6.88
Social Libertarian/Authoritarian: -3.64

Blimey you come out as more right than me and I wanted the death penalty , country right or wrong and all sorts of things thatv would scare a Liberal half to death

I feel strangely emasculated, although at least I`m a lot less Libertarian than you which is a relief.

The questions were a bit pants on occasion. Still I came out:

Which is about 0.5 South West of DK. Bit less Right, bit more Libertarian.

Surprisingly I came out on the left, yet I'm a BNP supporter.
http://farleftwatch.wordpress.com/

That's because the BNP is not, contrary to the media, a right-wing party: it's a LEFT-wing party, economically (ok, it's right-wing socially).

I am not going to take the test after reading the first question, because it's clearly bollocks. eg:

Yes, trixy, it did not get off to a good start! A few false dichotomies in there for sure.

South west of DK, but still on the right. Seems fair enough.

hey DK, take a look at this, devised by Chris Lightfoot no less

a lot of the questions were very odd (as commented on above by others...)

but i ended up roughly around where DK is.

but i dont think its entirely accurate, as some of the question appear to have built-in biases of the authors.

Political Compass is basically a scam: there's no particular reason that views on economics and social issues would be uncorrelated.

Where do you come on Chris Lightfoot's political survey at www.politicalsurvey2005.com?

Your position on this axis is 0.9
You are likely to be centrist.

Your position on this axis is 5.0
You are likely to be very free-market and pro-war."

The idea that free-marketeers are pro-war is a complete nonsense.

I wouldn't (and didn't) define myself as any of them since those terms are all meaningless.

Sorry, that one's no better than political compass (and rather worse for being that much older).

On the politicasurvey2005 compass, I best match UKIP voters for crime punishment, but bizarrely BNP for economics. The BNP are a close second to UKIP for the first category too.

I think this shows the massive flaw in this particular survey as there is no way on this earth I would vote for that bunch of red racists. Unless of course, it's the voters who don't take the time to actually look at what parties actually stand for, and just decide from media soundbites.

I think we just have to treat them as a bit of fun, as most issues are far too complex to be decided by a few simple questions.

I always like to look at this particular model, and read the article that describes it when thinking about a political position.
Unfortunately there is no test asssociated with it and you have to choose your own so 'self Identification' is allowed :)

I would agree with gengee Pornelles axes is much better

I think the quiz you are referring to is at "Advocates for Self-Government.

Actually Trixy, it is you who is making the assumption, based on the erroneous assertion that the rational self-interest of corporations will also fulfil the interests of humanity - there is your bollox!