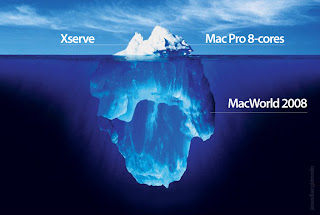 Just the tip of the Apple iceberg?
(Picture courtesy of Gizmodo.)

Apple has given a fairly hefty speed-bump to its Mac Pro line: previously reserved only for the top-of-the-line model, all Mac Pros now come fitted with quad-core "Harpertown" processors, based on the new 45nm architecture. This means that each machine is effectively equipped with 8 chips.

The frontside bus speed has been boosted to 1600MHz and processor bandwidth now supports up to 25.6GB per second. For the server market, Apple has also upgraded its XServe line in a similar manner.

These are beautiful machines and—though there are few things that I do that strain my processors in the slightest—I am going to be deeply jealous of anyone who has one. You have been warned.

Speculation has been rife as to why Apple should have released these machines just one week before MacWorld—its biggest annual product release exhibition.

I had a briefing with Apple on their new Xserve and Mac Pros that were released today, midweek during CES, a week before Macworld 2008. I had only one question for them, and it had nothing to do with hardware specs. Why release new gear when the Keynote is only a few days away? Their answer won't satisfy your curiosity, but here is the official response:

We're very excited about these new products and we think our customers will be too, so we wanted to kick off 2008 by getting them into our customers' hands as soon as possible. They're both available starting today.

Yeah, I figured I'd get that answer. What does this mean for the Keynote? Are they getting the proc bumps out of the way just to make room for the sexy new designs and devices made from scratch? Only The Steve knows. And whatever the answer, one thing is clear. These releases are only the tip of the iceberg.

Let's hope so. Such is the hype that Apple generates amongst Mac fans, that we get disappointed when Apple's announcements only include some speed-bumps to existing lines. We want astonishingly beautiful new enclosures and novel technologies, damn it!

Whilst many complain about Apple's secretive nature, I actually rather like it. It helps to build up a feverish anticipation—a positive anticipatory thrill—to every Apple keynote... And doesn't Apple (or rather Jobs) just know it!

But this is one of the reasons why being an Apple fan is so much fun these days: we can get excited about products that we would never buy simply because they are... well... beautiful and elegant. I mean, can you name me one other computer manufacturer (or, indeed, any manufacturer) that can build such a feverish enthusiasm with new product releases?

Personally, I am looking forward to losing myself in Steve Jobs' reality distortion field for a few hours: for those few hours as he's talking and for a couple of hours afterwards, not only is Apple the best company in the world, with the world's most amazing products but I—as an long-time, faithful Apple user—am the world's finest, most valuable consumer.

Yes, it's a manipulation but at the same time, for a little while, I feel like Iain Dale must do when West Ham beat... well... anyone. Yes, that's right: as I've said before, Apple is my football team and I'll support them till I die.

DISCLAIMER: I don't know if Dale owns shares in West Ham, but I do own shares in Apple.
By Devil's Kitchen at January 09, 2008

It was ever thus. I remember being at MacWorld in the very early 90s, Earls Court, maybe Olympia, forget, and all these Mac types were whooping and hollering like Americans, all very unseemly. I still have a badge on my kitchen pinboard from that show from the Wordperfect (remember them?) stand. It says FOREVER MAC. I'll try remember to bring it next time we beer, you can have it if you fancy a piece of crappy ol Mac memorabilia. This was before their non-Steve dark period, they were a pretty big noise in those days.

About a year ago I went to a High Performance Computing briefing and a Mac guy gave a presentation on the Mac Server. Can't remember the technicals but this guy had extremely lovely presentation slides - Powerpoint they definitely were not.

"Can't remember the technicals but this guy had extremely lovely presentation slides - Powerpoint they definitely were not."

i have a wordperfect mug so there.