A little while ago, there was a fatuous post on the Internet Explorer blog about what Microsoft should call IE8. Attached to the post were about 83,000,000,000 comments, all requesting the same thing.

We don't care what the fuck you call it: just make it standards compliant, you bastards!

OK, I am paraphrasing slightly, but you get the gist of it.

And now Mike Rouse reports the, frankly incredible, news that IE8 has apparently passed the Acid2 test with flying colours!

The test page presents one line of text (Hello World) and a 14×14 grid of 12px X 12px squares inside a containing block where a smiley face can be seen. The face has a yellow background surrounded by a black facial outline.

The following standards are involved in the Acid2 test page: HTML 4, CSS level 1, PNG, and data URLs. In addition, the Acid2 guided tour overview page defines these features that are included in the test:

When accessing the page, it is easy to see if the page is properly rendered in a browser because you’ll see the smiley face with the text “Hello World!” above it if all is well.

In fact, the page should look very much like this: 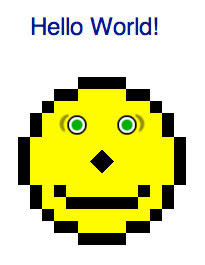 So, how do the current Mac browsers stand up to the test? Well, Safari and its sister browser, Webkit*, rendered it entirely correctly. So did the little-known (but rather nice) Shiira. All three of these use the Webkit rendering engine (which is, in turn, based on Konqueror's KHTML engine).

Alas, Firefox, Flock, Seamonkey and Camino, all of which use the Gecko rendering engine, did not do so well.

It going to be really fucking ironic if IE8 ends up being compliant and we end up having to attempt to hack sites in order to render stuff properly in the Gecko browsers. In practice, of course, this is unlikely to happen, since IE does have the Exception Commenting system which does, at least, allow you to hack pages without affecting other browsers. Thus, it is likely that it is the Webkit browsers that are likely to be hit hardest.

But a standards-compliant IE is almost too good to be true. Now, there is only one thing that needs to happen: when IE8 is released, even as a Beta, later this year, all of you still using it have to switch to IE8.

The Devil has spoken.


* Webkit really is pushing the boundaries of what one can do with webpages. This page, for instance, has some extremely cool, CSS-defined animations. Obviously, you won't be able to see them without downloading Webkit (I don't know if it is available for Windows), but seeing a div doing a full 180° spin, when you click it, is pretty fucking cool. I mean, I can't think in what circumstances I'd use such a thing, but it looks amazing.

But there are also divs that fade out and back in when hovered on, etc. and those I can see using (and those effects degrade nicely too).
By Devil's Kitchen at January 16, 2008

You can actually download them and see for yourself. Until I've got an IE on my machine I can actually test, why would I believe them? Why would you?

"Until I've got an IE on my machine I can actually test, why would I believe them? Why would you?"

Let's call it a triumph of hope over experience...

Tell me. I snaffled a basic webpage (CSS with rollover colours, bit of tabulation, thats all) and it renders in Safari, sometimes conks out in Firefox and IE occasionally just dumps the raw text! Nice.

Anyone know of a freeware WISIWIG page editor worth the time, let me know as I am about to go back to hand-crafted HTML only until I have the time to find out how to debug this damn stuff (It passes W3C CSS tests, btw).

You could add iCab to that list of non-beta browsers that renders Acid 2. In the 3.0 version it did it with its own rendering engine, which is rather impressive since it was the work of just one man.

DK, I consider it likely that, in classic MS style, it has been built to pass Acid2, not that it passes it as a consequence of standards compliance - so it might do Acid2 okay, just not anything else much.

Anon @ 7.57 probably has a good point, but I reckon they'll just do another few tests to wind M$ up if it's found to be true.

OTOH, Jennie just tested Acid2 on her Fx3beta install on her *cough*Vista*cough* laptop, and it resolves perfectly as well. My Fx2 has it all over the place, naturally.

So it looks like they may've fixed Gecko as well. I'll still keep my testbed Safari install to check stuff out on though.