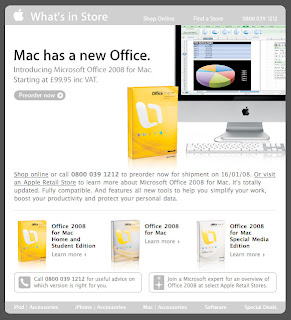 Microsoft Office: does anyone still give a shit?

I have received an email from Apple, announcing that Microsoft will release Office 2008 for the Mac on the 16th January.

This will be the first version of Office that runs natively on Apple's Intel processor Macs, rather than under Rosetta emulation.

Well fucking done, Microsoft: after all, it's only two years and six days after Apple introduced the first Intel Mac, and a mere two years, seven months and ten days after Apple announced the transition to Intel.

And, seriously, does anyone really give two shits? Since that time, I have helped at least six people to switch to Apple and then helped them to set up their machines. And they are all people who have to interact with, and use, Microsoft Office documents (mainly originating on Windows PCs); I have put all of them onto the free NeoOffice and they haven't had any problems (as far as I am aware).

So, well done, Microsoft—what window of opportunity will you be missing next...?
By Devil's Kitchen at January 14, 2008

Yes, Mac users will care. They will care if they want to make full use of Microsoft Exchange in their business. For this they need Entourage (the Mac version of Outlook). They will also care if they want to do anything remotely complicated with their word processor or spreadsheet, coz OpenOffice (upon which Neo Office is based) still don't cut the mustard beyond the basics.

And why do IT admins still go with Microsoft Exchange, despite its proprietary protocols and use of an ancient, poorly-scaling database for its backend? Because there ain't an open-source alternative worth pish. Oh sure you can cobble together some kind of setup that does 90% of what Exchange does, but your company will need to employ a Phd rather than a MSCE to maintain it all and your helpdesk staff will be tearing their hair out trying to talk secrataries through uploading their calendar to a server via WebDAV or some such nonsense.

Joy, at last you get Microsoft bloatware for the Mac.

Hell I ditched their crap years ago, Open Office does all I need it to and everyone I meet I advise them to make the switch away from that horrid Office shyte.

Absolutely - for those of us that don't need Exchange, it's already history. iWork is, respectively, good enough (Numbers vs Excel), all you need (Pages vs Word) and a thousand times better (Keynote vs Powerpoint).

I guess that makes you a true freetard, despite your previous witterings. :)

I guess that makes you a true freetard

To be a proper one he'd need to abandon bloatware like OpenOffice and produce documents the proper way - with LaTeX.

Just seconding the votefor LaTeX - and incidentally, for those who need their hands holding a bit more (like Mac Users), you can also run LyX on the Mac - I do. Yes, Apple make high quality Unix laptops...