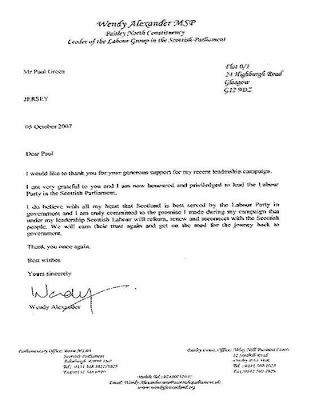 No doubt Mr E will be thoroughly sick of people linking to him and pointing out that, courtesy of a letter published by Guido, his paramour is in a spot of bother.

This letter should mean Wendy Alexander is toast. This personal note (dated October 5) to Paul Green shows that her telling the media that the first time she knew about the personal donation from Paul Green was 1 pm yesterday, is completely untrue.

Paul Green has also admitted that he gave two personal cheques of £950 which would have put him over the £1000 barrier and shown he was an impermissible donor.

Tom McCabe, her campaign manager, also said on Newsnight Scotland last night that David Whitton MSP was the treasurer for Wendy's campaign. Yet it was David Whitton who put this statement out on Wednesday night:

"Paul Green was invited by one on the Campaign Team to make a donation as a longstanding Labour supporter. As required by the rules we made inquiries about permissibility and indicated to him that only a UK resident or UK registered company could donate. The registered donation was a UK corporate one. The allegation that a donation was accepted and returned is untrue. We acted in good faith at every stage. The Electoral Commission has been kept appraised."

The Treasurer would have surely seen the personal cheques and Wendy could not have signed this without noticing the address was Jersey...

Well, yes, but we all know that politicians are oh-so-very-busy and they often get their researchers and assistants to do this kind of thing. Surely she might be able to wangle this one?

N.B. There is no wriggle room. She is on the hook completely;

Never mind; when she is cast aside, poor Wendy will need someone to comfort her and when she does... Well, maybe our impecunious Arcadian friend will be there to comfort her. Fear not, Mr E: now's your chance!

I can't say that I understand your obsession with the corrupt, plasticene-trout-faced wee baggage, but don't say that I am not here to spur you on...
By Devil's Kitchen at December 01, 2007

But I fancy the panties off Victoria Beckham.

Highburgh Road? Fucking hellski! I didn't realise the dozy tart lived just around the corner from me.

That ugly, doughy sulky face is a portrait of entitlement denied.

As sir hm said, "There's no accounting for taste." I find Posh only marginally less repulsive than Wendy. I have to confess though that I find Amanda Knox absolutely stunning.

>I have to confess though that I find Amanda Knox absolutely stunning.<

No, she's a total dog, but that dead Meredith chick - hubba hubba.