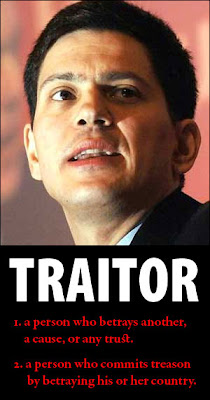 Over to EU Referendum [emphasis mine]...

In the meantime, we don't need to get (too) emotional. I prefer cold, hard hatred, from the deepest recesses of my soul, combined with a studied contempt for these fools who think they can ignore the lessons of centuries and run rough-shod over us. They have had their fun—the reckoning is to come.

Too right and it will be violent and bloody. Especially after hearing about the contempt in which he so obviously holds the British voters, 21.6% of which merely lent him the power which he has so gleefully signed away?

The last person to speak to David Miliband before he signed the EU Constitution/Treaty of Lisbon was UK Independence Party leader Nigel Farage MEP.

As Mr Miliband went to sign the hated treaty, Mr Farage took one last opportunity to ask the Foreign Secretary if Labour were going to honour their manifesto pledge and give the people of Britain a referendum. The response? "A hollow laugh."

How dare he smile as he signs us over to the tender mercies of the Brussels government, the grinning jackanapes.

In the meantime, let's see how many sidebars we can adorn with the above picture of Miliband: let the hideous little shit see what we think of him.
By Devil's Kitchen at December 17, 2007

Odd, the Milliband picture was there and now it's not...

Miliband is the "kapo di tutti kapi". He is also truly his father's son: from marxist refugee to socialist traitor in one generation.

You put it more juicily than I did. I was just apoplectic.