Those who do not learn the lessons of history...

Where do they find them, eh? "They" being Comment Is Free and "them" being quite the stupidest people on the planet. The moron pictured to your left is a certain Chris Hallam who is, presumably, CiF's joke find of the year.

Look guys, a joke's a joke, but I think that letting the fucktard write an article is just going too far.

Because Chris Hallam thinks that the smoking ban doesn't go far enough, oh no; Chris would like to see smoking totally banned.

Yet, in reality, neither of these arguments is entirely correct. The simple truth is that the conditions of the smoking ban are not too prohibitive, but that they are nowhere near prohibitive enough. Instead of producing the dream of a land free of the scourge of secondhand smoke, it's now virtually impossible to enter many pubs and clubs without first pushing your way through an unhealthy congregation of smokers converging around the doorway.

Tough shit. Further, I notice that you have failed to complain about the car fumes that you have had to wade through to get to the pub in the first place; do you own a car, Chris? Because, if you do, I would love to wander over and—with a cry of "hypocrite!"—punch you in the face.

More pointedly, the ban has exposed a wealth of contradiction in public attitude. To pick just one example, while nobody seriously questions that anyone using a mobile phone while at the wheel at the car should face the stiffest penalties, people are less concerned about smoking behind the wheel.

I really don't think that they are comparable, Chris, old chap. Why? Quiet apart from the concentration required to continue a conversation which dangerously distracts a driver from the events on the road, a mobile in one's hand is a serious impediment to the operation of the vehicle—it is actually quite difficult to hold a steering wheel, change gear and hold a mobile up to your ear simultaneously.

By contrast, a hardened cigarette addict smokes instinctively—the act requires no concentration—and you can hold a cigarette between your fingers whilst simultaneously keeping a grip on the wheel and changing gear.

Will that do for starters? Oh, and go fuck yourself for good measure.

And what about children? If the government is sincere about protecting those most vulnerable from second hand smoke, then why isn't a ban on smoking in all households containing children, at least being considered?

The children! Oh, won't somebody think of the chiiiiiiiilllldrrrreeeeeeenn? Perhaps you'd like to see smoking in a private home on a par with child abuse? Smoking around your kids is akin to beating them with a steel bar, or keeping them chained in a bath and starving them or just plain fucking them?

I think that you are getting a little over-ambitious, sunshine; the social services can't cope with their workload as it is, without them having to do the rounds to every family that has a smoker in it. This is especially true since, as far as I am aware, no evidence has actually been published about the harmful effects of secondary smoke.

But the upshot is that you think that you know how to raise children better than everybody else, don't you, Chris? I look forward to your next article, seriously advocating that all children be removed from their parents and put in Polly's State Podding HutchesTM.

You, sir, are an illiberal, authoritarian wanker of the most dangerous kind.

Where do they manage to get half-wits like this from? He calls himself a "freelance writer and researcher", although a Google on his name fails to turn up a single example of anything he has written before. He does seem to advise the Joseph Rowntree Trust, however. Which probably explains a lot.

Indeed. And you can expect those Toynbee State Podding HutchesTM to be coming along any day now—all your kids are belong to us.

So, we have, I think, adequately demonstrated the totalitarian evil of the man, but we must look to the last paragraph of Chris Hallam's so-called article in order to demonstrate his near-unbelievable ignorance and stupidity.

Ultimately, the ban enacted on July 1 should not be the end of the legislative process but the beginning. The months and years to come should witness a wealth of legislation enacted by the government leading towards one ultimate goal: the abolition of smoking, whether public or private, throughout the land, forever.

Godwin's Law-esque though it may be of me to point it out, but Hitler would have been proud of you, boy; he was none too keen on the evil weed either. But this is just bog-standard, I-know-better-than-you socialist evil; I'll let Bishop Hill take over once more to point out the stupidity.

You would have thought that after the chaos of the war on drugs and prohibition in the 1930s people would have learned that banning things has unintended and very unpleasant consequences. Mr Hallam obviously feels that tobacco smuggling gangs having gunfights on every street corner is a reasonable price to pay so he doesn't have to sully his nostrils with a whiff of tobacco smoke. Some people just never learn.

Quite. Ladies and gentlemen: let me introduce, hopefully for the last time, Chris Hallam—scum of the earth. Not only ignorant of history and thick as fuck, but also a nasty little dictator too.

Now, I'm off to find out where he lives, so that I can smoke an entire pack of my beloved Marlboro Reds and blow the smoke through the tedious little bastard's letterbox...

Fuck you, Hallam, you cunt.

UPDATE: CiF commenter GrandLunar has mocked up this rather splendid picture to commemorate Chris's article. 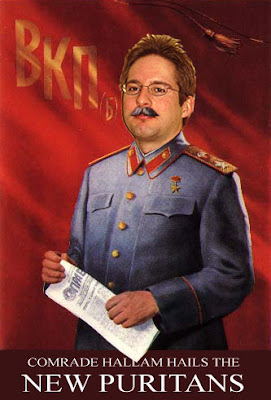 Hallam (under the monicker of timetocare but I assume that it is he) has replied to his detractors and, naturally, he is doing it for the good of society and the advancement of Man. Inevitably, I felt the need to smack him like the bitch he is, as have Timmy and The Longrider.
By Devil's Kitchen at December 30, 2007

One wonders what else this little toe-rag would have banned.

Presumably, it would be everything he doesn't personally do.

How wonderful it must feel to know so much, when so very, very young.

You do have to have respec' for the mind-boggling stupidity of the previously unpublished Chris Hallam when he writes, approvingly of: "a wealth of legislation".

Let's read that again. Chris approves of a wealth of legislation.

I have a feeling this is supposed to be a sly importation of the word 'wealth' to grab the folks who like wealth. Failed.

This stupid boy - I can see he is stupid from his silly little self-regarding face - wants a "wealth of legislation" to stop taxpayers (I suspect Chris Hallam is not of that number) from doing as they choose in a previously relaxed, free country.

Chris Hallam presents himself as a (previously unpublished) Nazi. You can judge this from his silly little gelled squiff and his terminally disapproving down-turned mouth. He is a silly little jerk who bills himself as a writer and has no credits.

I used to be a smoker, Chris, and I used to drive all the way from Houston to Dallas fuelled on cigarettes. That's 250 miles for a provincial such as yourself.

Not only that, Chris, but in common with a lot of Texas drivers, on the long straight stretches lasting for hundreds of miles of the highway, I USED TO READ WHILE DRIVING!!!

I always took a paperback along, as did everyone else, although, in the cause of honesty, some people took their local paper and caught up on their local councilmen and senators.

It was a divided highway, it was straight and very boring - you could go nuts driving across the Texas plains - so some people read a few paras to lighten the boredom.

I would like to see this silly little gelled quiff written up as a danger in the Highway Code as you just know these little prats are always adjusting the rear view mirror to view themselves.

"...I would love to wander over and—with a cry of "hypocrite!"—punch you in the face."

It's an eminently punchable face, isn't it..? CiF do their bloggers no favours sometimes.

I seem to remember that the research(very loose term) that led to the smoking ban found the only people who were at real risk were kids at home but they didn't ban it cos its not possible(electoral suicide) so they, using the mantra "something must be done" did this.The upshot is more people stay at home gassing the kids!!.

I wonder if sticking a photograph of Hallam's face on boxes of cigarettes instead of those health warnings would have any effect on sales.

I'd imagine that quite a lot of people seriously question whether anyone using a mobile phone while at the wheel at the car should face the stiffest penalties?

"One wonders what else this little toe-rag would have banned.

Presumably, it would be everything he doesn't personally do."

From that I assume that being anally fisted on Clapham Common won't be made illegal then?

it's telling that on the one hand he says that he doesn't care that he's been eviscerated, and then gets all uppity. Methinks he doth protest too much. He also misses the big point - what other people do with their lives is none of his busiess - and who the fuck is he to decide what is, or is not, wise?

What a sickening little oik Hallam is. That flabby, baggy, jowly face almost looks God-given for punching repeatedly of an afternoon...

The overwheeningly patronising tone is sickeningly representative of NuLab, sadly. I wonder which waste-of-space minister Hallam advises? I mean, he must be a government adviser, that pursed-lip face of his can only belong to a NuLab politico. A bigger shower of puritanical oxygen-wasters I've yet to encounter...

BTW DK, well done for sticking it to both Hallam and the equally nauseating timetoscare on the Grauniad CiF board.

Schadenfreudian - Not just a sickening little self-righteous drip, but he wants "a wealth of legislation". I can see the appeal. I would make his stupid little mini beard and his silly little quiff illegal in public. Photographs of his face while similarly surrounded by fanciful hair arrangements should also be banned in the brave new world of "a wealth of legislation".

Hallam makes me want to start smoking again. And stand outside whatever shitty bar he drinks in, blowing smoke in his face everytime he goes through the door.