Some weeks ago, we were treated to the unedifying spectacle of Alex Salmond bleating about the fact that Scotland would not receive the expected funding, via the Barnett formula, and thus the SNP would have to cut some of its more expensive pledges.

But Alex Salmond, SNP leader and first minister, has warned of battles ahead with Westminster over the level of funding Scotland receives.

The party has moved rapidly to implement a series of popular election pledges, such as ending tolls on the Forth and Tay road bridges, cancelling the closure of hospital A&Es and abolishing endowment fees for graduating students – Scotland’s version of tuition fees.

However, Mr Salmond has claimed Scotland has been short-changed in the Treasury’s recent comprehensive spending review and warned the settlement posed a threat to his public spending plans.

Spending by the devolved administration is set to grow by an average of 1.8 per cent in real terms over the next three years, reaching almost £30bn ($61.4bn) by 2010, according to the spending review.

But Mr Salmond said the Treasury had lopped £342m ($700.9m) off the £26bn ($53.2bn) expenditure baseline from which the increases were calculated, meaning Scotland would receive an average real term increase of only 1.4 per cent over the next three years – and a mere 0.5 per cent in the first year.

Scotland already offers free personal care to the elderly and the SNP is committed to widening further the gulf between Scotland and the rest of the UK by abolishing all National Health Service prescription charges.

This means the minority SNP government – which ousted the Labour and Liberal Democrat coalition that controlled the first two four-year terms of the Holyrood parliament – faces tough budget choices.

Well, yes and no. If Mr Salmond believes that the measures that he wants to implement are really that important, then he has another choice.

The Scotland Executive does have limited tax raising powers; you might remember that there were threats of enacting a "Tartan Tax" at one point. If Wee 'Eck really wants to implement his budget promises, he could simply add another penny to income tax.

It seems that Wendy Alexander may be starting to get the message.

Wendy Alexander yesterday called for a Scottish Constitutional Commission to draw up plans over the next year for the Barnett funding formula to be replaced.

The controversial 29-year-old system for the Treasury granting money to Scotland would be replaced by significant new powers for Scotland to set levels for some taxes and to be assigned a share of other taxes set in London. There would be a smaller block grant based on a new assessment of need.

The Scottish Labour leader suggested welfare and road traffic law could be among more powers to be devolved.

This may, in fact, be a way of defusing the current funding row, as David Farrer notes.

I believe that English opinion will force financial autonomy on us whether we want it or not. We may as well get used to it.

Quite so. Further, a "block grant based on a new assessment of need" to Scotland will enable both England and Scotland to better assess how much we subsidise our cousins north of the border. It would certainly stop people writing bollocks like this.

Still, the SNP will continue to moan about the North Sea oil and I am tempted to say that we should just allow Scotland total autonomy, including over oil revenues (which are far less valuable than they were). Here is a map of the main oil field locations and how they would be divided between Scotland and England under international maritime treaty guidelines. 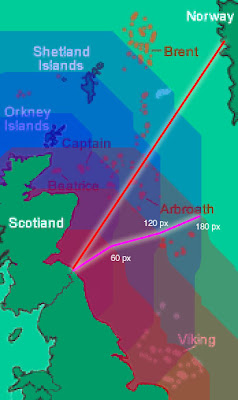 This map was made by Robert Sharp and is the culmination of a discussion between the two of us over the oil fields' ownership some 18 months ago (the red line is my somewhat simplistic—for which read "probably wrong"—attempt at a border divide). The Viking Field off the coast of England is, in fact, natural gas and not oil.

Fiscal autonomy would, of course, mean that Scotland was pretty damn close to being an independent country; but maybe Great Britain should be heading towards a federal arrangement anyway...
By Devil's Kitchen at December 02, 2007

a "block grant based on a new assessment of need"

Heh heh! "A block grant based on whether people in that region vote Nulab", more like.

Heh Heh Heh. If you continue your somewhat simplistic border off the west coast of Scotland it looks like we can lay claim to the Isle Of Man!

A federal arrangement really wouldn't work alongside national parliaments; far too unbalanced, just look at the Weimar Republic. Either a federal system whereby the counties (or regions/principal areas guff) have autonomy from the central government, or plain old dissolution of the union.

finste said: "Heh Heh Heh. If you continue your somewhat simplistic border off the west coast of Scotland it looks like we can lay claim to the Isle Of Man!"

Heh Heh Heh Heh. If you continue your own somewhat simplistic border beyond the Isle Of Man, you can lay claim to Ireland!

lets face it - the UK is a bit of an anancronism if you are , at the same time, opposing the creation of an EU superstate.

for isnt the UK a superstate in itself - made up of Scotland, England , Wales and NI.

a bit of federalism might do wonders for the tax system as each component will then be able to freely compete on taxation. for example, maybe Wales would go high-tax Swedish model, maybe NI might go low tax Eastern European model. and why not?

Anonymous Coward: I agree. No one has yet explained how a 'federal system' of independent sovereign states could avoid the complaints that led to devolution in the first place. Unless the people of England are to be substantially under-represented in a federal union, the peoples of the little nations cannot but continue to complain that they are being dominated by English interests. What advantage is there to the overwhelming majority of the population of the now no longer united 'U'K in preserving a union that creates a situation of severe fiscal and constitutional disadvantage for them?

Federalists are merely attempting to preserve a union that has outlived its usefulness but they are clutching at straws: Dissolution is the only way to resolve the present mess, and that includes Wales and Northern Ireland (the latter being a Br*tish, not an English problem).

The federal Parliament can deal with shared interests like the Armed Forces, the Foreign Office and the EU, i.e. all those issues where it makes sense for the UK Home Nations to act collectively. Even better, it also solves the problem of the House of Lords after Blair wrecked it. The House of Commons can become the English Parliament and the House of Lords the federal UK Parliament.

The trouble is, turkeys don't vote for Christmas. And so the politicians won't vote for something that affects their livelihood so directly. Which is why the Union is probably doomed - killed by politician's self interest.

The natty way the SNP "wins" the argument for "independence" is to start off by *assuming* Scotland is a separate country. Therefore of course the conclusion will be that Scotland should be independent. (This remark implies no judgement about the merits of independence for Scotland - or even England).

Although the Scots and English preen themselves on being different, from a continental European perspective they are almost indistinguishable. Ethnically all of the UK is a mix of 'original' Celt with considerable Roman, Saxon and Viking overlays. Later admixtures being the Irish, Jews and Hugenots.

The legal systems are similar and quite different to the EU's Corpus Juris (ex Roman) system. Language, customs and culture are all similar. Differences within England or Scotland are as great as those between the two.

All the UK is noticeably different from any EU country (tho' Ireland and Denmark are the closest).

With 70%+ national laws emanating from the EU, Scotland (and England) are already more governed from Brussels than from London. If Scotland has only a small say in the UK, how much smaller will its voice be in the EU? Independence with the EU is a mirage.

The Government of Scotland were allocated a budget of £33 Billion Pound by Westminster.

Imagine Scotland having an additional £12 Billion that it currently gives to LONDON not SCOTLAND.

2 High Schools or 16 wind turbines a day with it's VAST oil revenue.

In 66 days Scotland's oil money could pay for rebuilding all Scotland's High Schools or in 16 days the World's largest wind farm! or it could fund building;

Alternatively the Scottish Government could afford to give every Man, Woman and Child that resides in Scotland £2300.00 each a year in an additional services, investments, loans and development grants for Scotland's Future Prosperity - and help us out of LABOURS Credit Crunch.