Richard Murphy, who claims to be a tax expert, is talking utter tripe again.

Business leaders in the world’s biggest economy will be discussing US Treasury’s latest tax reform proposal, including the lowering of corporate income tax to 28% and introduction of a so-called business activity tax, which would act as a VAT.

Oh, great; VAT has been so very successful in this country, hasn't it? How many billions were denied to the government through carousel fraud last year?

But the really egregious bollocks is here.

Yet again, the corporate world seeks to lower its tax bill by shifting it onto ordinary people with a smaller capacity to pay.

It’s not even controversial, it’s a well known fact, that corporations do not in fact bear the burden of the corporate income tax. The actual burden is carried by some combination of the workers, in lower wages, the customers in higher prices and investors in lower returns.

The Congressional budget office saya that, in the US, more than 50% is bourne by the workers. Another more recent international paper says that in the long term, a $ 1 raised in corporate income tax reduces the workers’ wages by more than $ 1.

Lowering the corporate income tax therefore benefits the incomes of the workers.

Does Murphy simply not know this basic point?

Apparently not. Maybe Richard will actually participate by telling us whether he does or not. His first reference point might be this post at The Kitchen, which references both of the papers that Timmy refers to, as well as his commentary on them. The conclusions are, I'm afraid, pretty inescapable.

And the gap between the richest and poorest will get ever bigger.

Who cares? Richard, if you give a crap about this, you are in the company of loons like Toynbee and Harding.

As long as everybody is getting richer, I fail to see that it matters in the slightest. That's what we want, isn't it—for everyone to be able to live comfortably? Does it really matter if some people have billions and others earn only tens of thousands?

I mean, as my impecunious Athenian friend pointed out when fisking one of Polly's bigger loads of old horseshit, the distribution of wealth has not, actually, changed in this country since the early seventies. 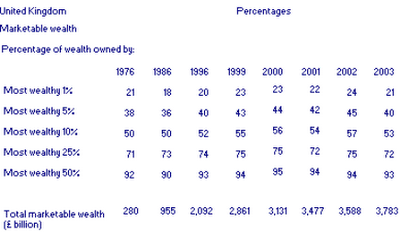 Unless I'm reading the numbers all wrong, the distribution of wealth in our society is [in the most recent figures] almost exactly the same as it was in 1996 - or, for that matter, 1976. (Note the effect of the Thatcher years, too. See all that money being squeezed up towards the top? No, me neither.)

So, all of this rather begs the questions what fucking Mickey Mouse qualification has Richard Murphy got, and how much did he pay for it?

Richard Murphy: what a genius!
By Devil's Kitchen at December 22, 2007

Everybody, including Worstall, Redwood and Osborne, misses the point.

Draw some supply/demand curves and look at the effect of different taxes, and it is quite clear that in terms of damage to the economy, the worst taxes are VAT and then Employer's NIC; corporation tax isn't that bad actually; and the least-bad tax (pace Milton Friedman and a million others) is land/location value tax.

It is also the case that VAT raises £80 billion and corporation tax £50 billion, so for that reason alone we should look at VAT first ... only we can't talk about that, can we? Becuase the EU says we have to have VAT (minimum standard rate 15%).

Of course you have to have VAT. If you didn't have a VAT there might be "harmful tax competition" (harmful to government bureaucrats), and we can't have that.