More irrelevance and lies on climate

The Kitchen's very own Carpsio has written a stonking article below, and Timmy a more measured one, on this new report [PDF] which measures Britain's carbon footprint by the amount of carbon that we consume rather than produce. Timmy expands on the conclusions at The Business.

But of course the really interesting thing is to ponder on what we should do about this new information?

The first thing is of course to abandon Kyoto, as this measures emissions by place of production, not consumption, and as the paper shows these two measures can move in different directions.

The second is that we should of course be trying to reduce emissions in total, rather than by where they are either produced or emitted. We should, for example, be buying New Zealand lamb as that has lower total emissions than UK produced. Or Spanish tomatoes rather than hothouse raised British ones.

But it also means that we should be investing in the technologies which allow that heavy industry to continue to exist but with lower emissions.

Which, largely speaking, has been the thrust of US policy on climate change, to invent and deploy such technologies in countries like China where the things are actually made. Odd that The Guardian doesn't reach that conclusion really.

I would imagine that his last line is ironic since there is no way that The Guardian—despite producing thousands of tons of rubbish every year (as newspaper pulp) and being responsible for producing thousands of tons of carbon every year by paying far too fucking much money for talentless arsehole columnists, such as the egregious Polly Toynbee, and allowing them to afford their comfortable lifestyles—is ever going to admit either that the US has the right idea or that not reducing everyone in the world to eating tofu and raw rabbit-shit is going to be the solution.

However, whilst I agree that this report may be interesting in an abstract way, I have to disagree with Timmy in that he actually takes the time to ponder "what we should do about this new information". This is, of course, a complete waste of fucking time and we should be actually spend our time doing... well... anything else, as I pointed out a few days ago.

It is worth stating for the record: there is no global warming and there is no sea level rise. The IPCC has made the whole thing up. The IPCC are a bunch of stinking, fucking liars.

So, pondering what we might do on a report that is yet another massive waste of cash which could have been put to better use elsewhere is simply throwing bad money after more bad money. I am going to state this very clearly.

As another example of how the Intergovernmental Panel on Climate Change (IPCC) are twisting in the wind as more and more scientists—both amateur and professional—are knocking down the fucking lies of this perfidious body one by one, we address once more the problems of measuring surface temperature.

Frequent readers will know that I have argued for a while that substantial biases exist in surface temperature records. For example, I participated in a number of measurement site photo surveys, and snapped this picture of the measurement station in Tucson that has gotten so much attention: 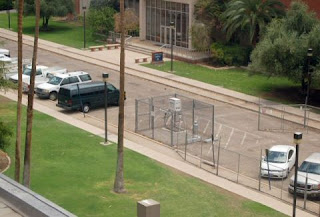 You will note that this measuring station—which, when it was first set up, was in an isolated spot—is now in the middle of a car park and surrounded by tarmac. Car engines emit an awful lot of heat and tarmac stores a lot of heat from the sun and then radiates it back out.

Does anyone seriously think that these heat sources are not affecting the measurement of temperatures taken from this station?

Given that they obviously do and that the station is therefore measuring a temperature higher than it would do than it was 50 years ago, would you adjust the measured temperatures up or down for comparison? Me, I'd go with down; I would be inclined to put a negative bias on the temperatures measured today, as opposed to those measured 50 years ago.

But oh no, not NASA. No, as we have seen, NASA's strategy is to put a positive bias on the figures. In this way, NASA GISS have managed to manufacture a warming trend that does not exist even in the raw recorded data, something that Climate Sceptic has been very hot on.

Global warming catastrophists do not want to admit this bias, because it would undermine their headlines-grabbing forecasts. In particular, they have spent the last year or two bragging that their climate models must be right because they do such a good job of predicting history. So what becomes of this argument if it is demonstrated that the "history" to which their models correlate so well is wrong? (In fact, their models correlate with history only because they are fudged and plugged to do so, as described here).

Indeed. Of course, whilst all of this might seem slightly academic, in fact it is absolutely crucial. If there is no warming happening, then all of the catatrophists arguments fall apart; there is, as far as I am aware, no proposed mechanism for CO2-driven global cooling (there is for other particulates, of course, as proposed in the early 70s when it was global cooling which was going to destroy Western civilisation by the mid-80s).

Ross McKitrick, a Canadian economist, performs a fairly simple and compelling test on recent surface temperature records. The chief suspected source of bias is from urbanization. The weather station above has existed in Tucson in one form or another for 100 years. When it was first in place, it sat in a rural setting near a small town characterized by horses and dirt roads. Now it sits in an asphalt parking lot near cars and buildings, a block away from a power station, in the center of a town of a half million people.

Our new paper presents a new, larger data set with a more complete set of socioeconomic indicators. We showed that the spatial pattern of warming trends is so tightly correlated with indicators of economic activity that the probability they are unrelated is less than one in 14 trillion. We applied a string of statistical tests to show that the correlation is not a fluke or the result of biased or inconsistent statistical modelling. We showed that the contamination patterns are largest in regions experiencing real economic growth. And we showed that the contamination patterns account for about half the surface warming measured over land since 1980.

The half figure is an interesting one. For years, it has been known that satellite temperature records, which look at the whole surface of the earth, both land and sea, have been showing only about half the warming as the surface temperature records. McKitrick's work seems to show that the difference may well be in urban contamination of the surface data.

It is worth noting, further, that the satellite data shows a high temperature spike in 1998 and then a very sharp fall before continuing on a level trend (it is unknown whether that graph has been doctored as the land records have; I am going to attempt to track down the raw data at some point).

Still, the urbanisation argument has become increasingly important as amateur organisations such as surfacestations.org have started to document precisely how many of these measurement stations are affected. Further, because of the way that the data is collated, in a grid, one contaminated station can affect the readings of an entire grid square of hundreds of square miles and thus skewing the results of stations unaffected by urban sprawl.

And what is the IPCC's response to all of this? Well, they have an explanation and, really, you are going to love it; seriously, it makes NuLabour's protestations over the dodgy donations look positively convincing.

So how has the IPCC reacted to [McKitrick's] work? For years, the IPCC ignored his work and his comments on their reports. Finally, in the last IPCC report they responded:

McKitrick and Michaels (2004) and [Dutch meteorologists] de Laat and Maurellis (2006) attempted to demonstrate that geographical patterns of warming trends over land are strongly correlated with geographical patterns of industrial and socioeconomic development, implying that urbanization and related land surface changes have caused much of the observed warming. However, the locations of greatest socioeconomic development are also those that have been most warmed by atmospheric circulation changes (Sections 3.2.2.7 and 3.6.4), which exhibit large-scale coherence. Hence, the correlation of warming with industrial and socioeconomic development ceases to be statistically significant. In addition, observed warming has been, and transient greenhouse-induced warming is expected to be, greater over land than over the oceans (Chapter 10), owing to the smaller thermal capacity of the land.

So the IPCC argues that yes, areas of high industrial and socioeconomic development do show more warming, but that is not because of urban biases on measurement but because of "atmospheric circulation changes" that happen to warm these same urban areas. Now, this is suspicious, since Occam's Razor would tell us to assume the most obvious result, that urbanization puts upwards bias on temperature readings, rather than on natural circulation patterns that happen to coincide with urban areas.

But it is more than suspicious. It is a complete fabrication. The report, particularly at the cited sections, has nothing about these circulation patterns either showing that they coincide with areas of economic growth or that they tend to preferentially warm these areas. And does this answer really make any sense anyway? A recent study in California showed warming in the cities, but not in the rural areas. Does the IPCC really want to argue that wind patterns are warming just LA and San Francisco but not areas just 100 miles away?

No, but the IPCC doesn't really need to argue any such thing for the simple reason that nobody who matters will actually read their reports; they will only read the Summary for Policymakers which are digests of IPCC data reports and which are not written by scientists.

The common perception of the Intergovernmental Panel on Climate Change (IPCC) is one of an impartial organisation that thoroughly reviews the state of climate science and produces reports which are clear, accurate, comprehensive, well substantiated and without bias.

One only needs examine some of its procedural documents, its reports and its dealings with reviewers of the report drafts to discover how wrong this impression is.

The IPCC is not and never has been an organisation that examines all aspects of climate change in a neutral and impartial manner. Its internal procedures reinforce that bias; it makes no attempts to clarify its misleading and ambiguous statements. It is very selective about the material included in its reports; its fundamental claims lack evidence. And most importantly, its actions have skewed the entire field of climate science.

The IPCC is a political organisation, not a scientific one. It should be torn up by the roots and utterly destroyed, before they convince our politicians to drive us back to—and keep the Developing World in—the Dark Ages.
By Devil's Kitchen at December 10, 2007

I shall be a Devil and point out that IPCC also stands for "Infinity Property and Casualty Corporation" ...

People feeling a little mischevious can go here and edit the communique. The site is part hosted by the utterly repulsive Margot Wallström.