We all pretty much accept that the police are worse than useless but, even by the low standards of the Shit, this story is impressive (and you should read the whole thing).

"NORTH Wiltshire's top cop has warned residents in Cricklade they could be responsible for the closure of their own police station.

Cricklade Police Station, in High Street, no longer has a manned front desk due to cutbacks, but Chief Inspector Boland urged residents to use the station as much as possible.

When members of the public complained it was closed, Ch Insp Boland assured them it was manned and officers at the station would respond if they were not tied up.

"It is not closed but when the accountants come to review our expenses the first thing they will say is that it is perceived to be closed anyway' and they will close it," he warned."

Cricklade residents (aka the customers) are angry because their local police station is closed- ie if you go there you find nobody manning the front desk, and even if you shout, nobody comes. But rather than putting it right, North Wiltshire's top cop advises them to pretend the station's functioning properly as it is. Otherwise, he says, it will be perceived the residents perceive it's closed, and it will be closed. Even though in real world terms, it's closed already.

The estimable Wat also had a look at police pay...

Having perused the stats, we can confirm they're certainly well paid. According to the Office for National Statistics, your typical copper at sergeant and below now earns £36,700 pa (ASHE April 2007; T 14.7a, full-time median). That compares with economy-wide median pay of £24,000 (ft median). So the cops get a premium of 50%. 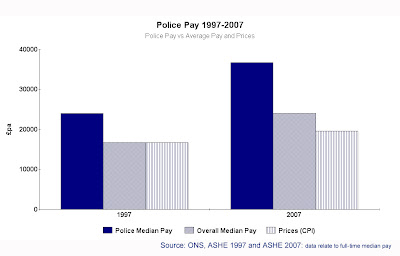 So I'd say Labour has done pretty well by the cops (and see here for Reform analysis).

Especially considering we taxpayers have done much less well. Despite all that extra cash, police efficiency levels have plumbed new depth (see this blog). According to the latest report into police funding from the Home Affairs Select Committee, since Labour took over, total police funding has increased by 40% in real terms. And although some crimes have fallen, the serious crimes we really worry about haven't. Moreover, much of the overall fall has had nothing to do with the police. As the Committee notes:

"In the case of both vehicle crime and burglary, improvements in security—far more than any government action—have probably been a significant contributor to overall falls... Excluding successes on burglary and vehicle theft, there has been a more mixed picture in tackling overall crime, particularly given the increase in resources available to the police. For example, between 2002–03 and 2005–06 violent crime as measured by the police recorded crime statistics showed a 21% increase..."

So if you were a cop, your best bet would be to think "thank you very much" and shut your gob. You certainly shouldn't be drawing attention to yourself by going down with a dose of Blue Flu. Because as the firefighters discovered, the public often have no idea what public employees get paid these days, and when they find out they can turn nasty.

It's the same old story with the public sector—looking at pay for the health sector, for instance, tells precisely the same story—and that is that pay is up (by a lot) and productivity is down (a lot). In other words, the taxpayer gets raped to massively increase pay for public sector workers and the net result is less work done by public sector workers.

Which is why, as far as this humble Devil is concerned, the police can fucking whistle for their backdated pay, the bunch of useless, lazy, fucking bollocks. Because we have tried the carrot; now it's time to employ the big fucking stick (or the seemingly ubiquitous "iron bar").

It's time to bring in elected police chiefs who we can throw out (without any big fucking pay-offs, thank you very much) if they don't do their fucking job. And right now, every fucking police chief in the country would be out of a job, the targets-obsessed, workshy bullies.

P.S. The Daily Mash sums up what the police are good for.

"People might think we sit around on our arses all day, sending squad cars out for fish and chips and ignoring your desperate pleas to stop the local kids urinating on your car. But we don't. We shoot olive-skinned electricians. In the face."

He warned that an all-out strike would also leave young black men free to drive their own cars and that second-round FA Cup matches would be forced to go-ahead without an intimidating police presence.

Logan added: "And who is going to stop you for having a faulty rear brake light and then lean in your window and make you feel small in front of your wife, while his partner leans in the other window, fondles his truncheon and winks at your missus?"

You coppers start doing the job that you're fucking paid extremely well for, and then we'll talk. Until then, fuck you.
By Devil's Kitchen at December 18, 2007

First you piss off the quacks, now it's the filth. You are braver man than me!

PCSOs get a pay rise backdated to September the first i'd say rubbing salt into the wounded.
What is really going on. cops strike or leave on masse saves the government a fortune on police pensions.
I smell a rat around!
144.000 trained police the new intake of diversity clones useless anyway.
Rumours around of the euro gestapo type cops here in training....
New labour dismantling the UK.
Time for another peasants revolt!

Making room for COMMON PURPOSE GRADUATES?
THE NEW STASI!
In excess of 60.000 already trained in their post democracy ways.