Nick Robinson reports that our monocular cunt-faced arse-biscuit of a Prime Minister will, in fact, sign the Reform Treaty EU Constitution*.

The prime minister will travel to Lisbon this Thursday where other EU leaders will sign the European Union Reform Treaty but, tragically (sic), he will arrive too late for the signing ceremony. Mr Brown will be delayed in London by his appearance before select committee chairmen in the Commons and so will arrive only in time for lunch. Downing Street made clear today that he will sign the treaty then but, tragically (sic), the cameras will not record the moment for posterity.

As long as he signs it in the end, what does it matter? We socialists don't go in for all this ceremony stuff.

Absolutely not. Here are some socialists not going in for all this ceremony stuff. 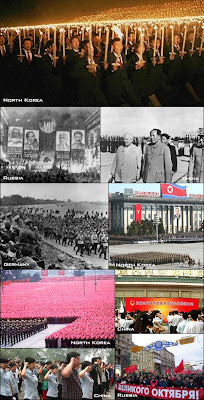 Finally, "Justin" finishes off with a nifty dose of paranoia, just to make all those socialists feel at home (in the absence of a ceremony).

Not having the cameras there benefits the Tories anyway because if they win the next election they could always argue that Gord's signature has been forged. - "where's the proof that it was him signing it?"


* Did you see how smug Batshit looked on Newsnight last night as he admitted that it would, indeed, be him signing the Constitution? In the name of all that's un-fucking-holy, I loathe that slimeball...
By Devil's Kitchen at December 11, 2007


have a look at this.

This strange image just popped into my mind. Neil Harding and "Justin" getting hitched at a non ceremonial commitment ceremony.

Such towering intellects surely deserve each other.

"Justin" finishes off with a nifty dose of paranoia: 'Not having the cameras there benefits the Tories anyway because ..... they could always argue that Gord's signature has been forged.'

I thought the point of "Gord" not having witnesses was so that "Gord" could claim, in future, that he had not signed it!

Surely (Shurely?) we (and the Tories?) would actually want proof, so that Gord will get his just deserts for his betrayal?

A shot of the Nuremburg rallies would have gone down a treat, they were the after all the National Socialist German Workers Party.

Oh, Milliblink has to sign it anyway -- there are two places to mark for two traitorous twats.

Although I do agree, there was indeed a stench of smug from his lopsided face. I assume that it'll be the only mark that history will remember him by.

Well, that and his dripping entrails mixed with McCavity Brown hanging from a gibbet in the newly named Retribution Square...

If you notice, Miliband was lit by C4 so he had a green face...or was that just how he looks?