Arthur Scargill: bit of a charmer 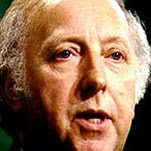 Scargill thought Stalin was a "very good leader" whose "mistakes" must be seen in context. Scargill's remarks must be seen in the context of Scargill being an absolute prime, Grade A cunt.

This is a telling summary of an interview, conducted by Nicky Campbell on Radio Five Live, with Arthur Scargill.

Next Scargill was asked by a listener about his views on JV Stalin: did he regard him as "a good socialist"? Arthur replied that he thought Stalin had been a "very good leader", especially during World War II. It was true that he had committed "many, many errors", but, there again, "Churchill in Britain was also criticised".

Campbell at this point mildly suggested that it was perhaps not Stalin's record as war leader that was the main issue. After all he stood accused of being a "mass murderer". Did Scargill think Churchill had killed more people than Stalin? And what about the gulags, the show trials? Yes, yes, said Arthur, but these "mistakes" must be seen in context. Don't forget, "the problems of the Soviet Union were infinitely worse after Stalin than before his death".

As Scargill was unwilling to venture an opinion on whether Stalin was responsible for more deaths than Churchill, Campbell tried another tack: who did our general secretary think was worse—Stalin or Thatcher? By now Scargill was really getting tied in knots. Until and unless he knew the truth, he could not go along with allegations against the former Soviet leader: "If people were killed, or put into concentration camps, it was wrong." Arthur conceded that Stalin may have done those things, but he knew that Thatcher had "destroyed our manufacturing industry, people's hope". The listener who had originally asked the question compared Scargill's response to the holocaust-denial of David Irving.

"Yes, but look where they were running to."

I wouldnt mind arranging a meeting between Scargill and The Forest Brothers.

And then to just stand back, turn away, and ignore what happens next.

I don't want to be picky, picky, picky and ruin a good joke, but actually, it was Mussolini who had the reputation for having made the trains run on time.

verity. it was just fascist propaganda.

but i guess, you were kind of expecting that anyway.

I am aware of that, of course; the commenter in question, however, obviously was not...

John Trenchard. That's not the point. It was the wrong dictator. Mussolini was the one that got hanged from a lamppost, which I always thought was rather festive. This being the Christmas season, it might be nice if Anthony Lynton Blair took a hint.

....crimes against humanity by a leftist government aren't crimes at all....

There's no logic with leftists, just a base tribal fealty to Big Brother and the Party and a fiery visceral hatred of anything that's different, anything that deviates from the Party's instructions.

The comment you are thinking of, did it come from Ricky Gervais?

"Yeah, but think about where they were going!"

I always thought that scargill should have got the Nobel Prize for Medicine.

After all, he bears the main responsibility for closing down all our pits and as a direct result far fewer miners died of lung diseases.

Many moons ago my great uncle Harold chinned Arthur Scargill. He got arrested for it but let off because everyone around him, including the police, said that they were looking in the other direction when he butted the hatchet faced buffoon.

Having nearly run him over in London some years ago, it was quite a surprise to see what a small man Scargill actually is.

Secondly, the joke about the trains isn't much of one. In the military history museum in Caen, they have a rail map, looking like any other rail map, until you look at the destinations; Auschwitz, Buchenwald, Dachau, etc. Very, very chilling.

Vicola - good for your great uncle. This apologist for mass murder once called at my parent's house during an election and my mother had the pleasure of telling him to get lost - not quite in the same league, of course. I'd have set the dogs on him, but I would have had to acquire some dogs first.

The French - never mention Drnacy or Vichy to them

Whilst Scargill may seem a touch irrelevant, and whilst many on the left would today distance themselves from him, fundamentally the left are still of this sociopathic mentality, so blinded by ideology that the end always justifies the means, so long as it's consonant with the pursuit of what they believe.

There's a great analysis of this by Theodore Dalrymple, in which he talks about the left having a detached, intellectual compassion, that has no real humanity or understanding of humanity.