... this is "a metaphor for disapproval" stoning. 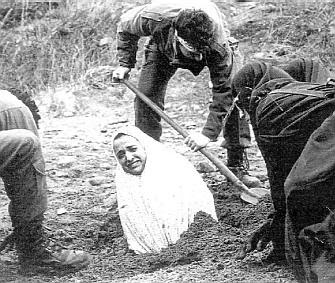 Perry de Havilland does not put a foot wrong in this comprehensive fisking of the hideous Dr Bari.

But sadly the Pakistani and Saudi flavour of Islam that Dr. Bari is part of have done nothing of the sort and show no signs they actually want to embrace modernity at all. Their notions of Islam, which is clearly the most evangelical version of the religion, is a toxic political and philosophical creed that is simply incompatible with liberal modernity and Dr. Bari's equivocation about stoning people to death tells you everything you need to know about where he is coming from intellectually.

Go and read the whole thing.

UPDATE: someone has pointed out that the above picture is a still from a movie. As such, you can watch a video of a stoning here (scroll about half-way down the page), and here's another picture for good measure. 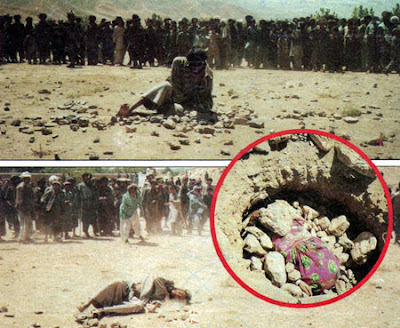 Email ThisBlogThis!Share to TwitterShare to FacebookShare to Pinterest
Labels: culture, Cunts of the Highest Order, just not fucking funny, religion

I'm not always agreeable to what Perry has to say- particularly as he seems more willing to put bloody-minded expediency in the name of the War on Terror (or whatever you want to call it) above principle on occasion- but with this article he's pretty much bang on.

Perry rules and always has. This was an outstanding post. Bari-boy should feel like toast, and I think he does, and he is wearing it on his head.

"tells you everything you need to know about where he is coming from intellectually."

Or more correctly, not coming from intellectually. It is one thing for illiterate, uneducated peasants to believe in Islam, they are, after all, told that the Koran forbids them asking questions. However, for anyone with a modest level of education, it takes a real effort in belief suspension in order to be able to subscribe to the cult of a little girl loving, robbing, murderous charlatan.

"...for anyone with a modest level of education, it takes a real effort in belief suspension in order to be able to subscribe to the cult of a little girl loving, robbing, murderous charlatan."

Well, not if, like Bari and his ilk, you've figured out it's a great way of ensuring that the illiterate, uneducated peasants do what you tell them to do...

It is a great shame that people in the West are not properly educated with regard to the story of Mohammed (curses be upon his miserable, worthless soul) and the spread of Islam. They would then laugh when idiot leaders like Blair insist that Islam is a religion of peace that should be respected.

The only appropriate response from intelligent Muslims who come to the West and are confronted by the legacy of the Enlightenment, is to realise what a complete crock of s**t Islam is and to reject it. Anything else is to deny the self-evident.

Docbud, that's the worrying thing, most of them don't.

Apparently stoning is regarded as the most painful form of execution. Death comes in small increments and can take a very long time. It's not just death, it's a torturous death.

In short, it's fucking sick.

that's correct - the rules on stoning are quite specific - in that the stones cast cannot be big enough to kill outright.

"Dr" Bari (and his dodgy syrup) and the MCB always have a hidden agenda.

Again, I notice he slips in the "innocents" meme and spends all his time asking for everyone else to channge (for who else is to blame, eh?).

... These are rocks hewn of the finest Afghan granite ...

Err..if you read the link, it ponts out that 'the ’stoning’ actually takes place in a 1994 Dutch indie film called De Steen, directed by Mahnaz Tamizi. The ‘teenage girl’ is actress Smadar Monsinos."

They do the same in Northern Nigeria

Yuck I didnt watch the video but I can well imagine. As it is I have trouble sleeping

The MCB among others are DEMANDING that we acknowledge the great contribution that Islam is making to the UK? And it looks like the NuLab vermin will agree!
Fucking evil,sick and mentally retarded scum! and thats just the NuLabour 'dhimmis'!

I have always said that mohammad (Peas In Vinegar Be Upon Him) was an egotist and that islam is a cult. Mo' was the L Ron Hubbard of his day.

Bari(Wigs Be Upon Him)is unable to understand advanced Western society and finds it unsettling (Alka Seltzer Be Upon Him) because he cannot get his head out of the Stone Age (the Stoning Age) and cannot understand that Christianity and Judaism promote creative, enquiring thought and accept change, which is why we have changed the face of the world. We can also make pretty decent wigs.

What have the Bangladeshis (Bari,lecturer to the West, is from Bangladesh) invented?

What have the Arabs (Sand Be Upon Them) invented?

See, Bari's (Wigs be Upon Him) point is, there was no need for the West to invent anything, because anything that was worth having, and any thoughts that were worth thinking, had already been executed, so to speak, and thought by mohammad.

Dictated by their allah. (Well, excuse me, but did allah think of saying, "This is one small step for mankind" when the NASA landed a man on the moon? Did allah write ‘Hotel California’? )

Do you take my point, Mr Bari?