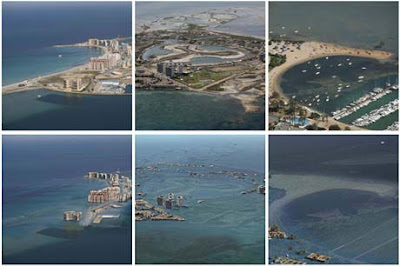 The Spanish are being shown, by Greenpeace*, images of what climate change could do to their country.

It's an apocalyptic view of the future, a stark warning to Spain of what the country could look like if action is not taken to reduce the effects of climate change.

The warning comes in a book, Photoclima, launched this week by Greenpeace in which images of some of Spain's most emblematic places have been altered to show what they could look like in the future. Using statistics from the UN panel on climate change and a touch of digital makeup Greenpeace hopes to scare Spain into taking action.

Gosh! That is pretty scary! Is it true?

According to the group's director in Spain, Juan López de Uralde, the intention was not to use "scientific rigour" but to "create alarm and a call to action".


Right, so when they say that they aren't using "scientific rigour", what they actually mean is that they are deliberately... well... lying. But what do you expect from these Green loons: after all, they have form.

Green charities and scientists adopted precisely the same tactic during the scare over global cooling in the early 1970s, e.g. this classic from Dr SH Schneider...

[W]e have to offer up scary scenarios, make simplified, dramatic statements, and make little mention of any doubts we may have. Each of us has to decide what the right balance is between being effective and being honest.—Quoted by Jonathan Schell in The Fate Of The Earth, 1982.

They were wrong then, and they are wrong now. Fuck 'em, the lying sacks of shit.


* I wanted to look up Greenpeace UK's accounts, to see where their funding comes from, so I looked up their number on their website.

Now, I assume that they are a Registered Charity but, oddly, if you put their registration number into the Charities Commission website, nothing comes up. If you search for "greenpeace", all you get is the Greenpeace Environmental Trust, the registered number of which is 284934.

UPDATE: thanks to those in the comments who pointed out that Greenpeace run political campaigns and are therefore not allowed to be a charity, a fact that I should have remembered.
By Devil's Kitchen at November 18, 2007

Greenpeace aren't a charity because of the current rules on political activity.

Liberty are in much the same situation.

I, personally, find Spanish people in Spain to be insufferably rude, so these pictures cheer me up no end.

Superimposed on the Netherlands or Italy, a tragedy. Spain? Fuck 'em.

mark - just say you are Irish. or Scots.

works a treat. honest. you get a totally different response.

(i think its a hangover from the spanish armada - and the whole Gibraltar kerfuffle.)

getting back to greenpeace funding - there's nothing to dig up on their charity trust fund wing. they got about £2 million of funding from "legacies" , but i'm none to the wiser as to where that comes from.

in order to get the real greenpeace accounts you'll have to go to the companies house website and spend a few quid to buy the accounts filed.

So the working ethos of this bunch of Stalinist cunts is that the ends justify the means? So its OK for them to lie and cheat and manipulate and pervert the truth because they think that its in our best long term interests? CUNTS, the lot of them!
Whats worse is that these fuckers have a clear run in the media, nobody is asking the hard questions about where their money comes from and nobody is making them account for their past lies about the enviroment.
These scumbags seem to have learned their propaganda techniques from the old Soviet Union?

...and the Smith Institute is not involved in politics at all.

I was accosted yesterday, at the Columbia Road Flower Market by the most dreadful little man. "Demonstrate against climnate change!" he shrieked im a grating accent. When I quite reasonably, I thought, pointed out that the climate was unlikely to care if he was demonstrating against it, he looked at me as if I was the mad person in this conversation.

Readers of the DK may wish to pop over to Bjorn Lomborg's site. He caused quite a stir at a debate I recently attended at the LSE.

This boook may make quite a good Christmas present methinks.

But they do get cash from the likes of the Network For Social Change....

You'd have had a bloody fit if you'd heard the presentation from Friends of the Earth (Scotland) that I was subjected to this afternoon. Actually, when it goes online, I'll send you the link. Not only was it a load of bollocks, but it was supposed to be about marketing and very clearly wasn't, so it was irrelevant bollocks to boot.

I also raised your points about issues of trust when the voluntary sector is so closely tied to the government. That went down like a cup of cold sick with the reps from the Scottish Exec... Government.

If I wrote to them, do you think they'll send me some accurate maps? I mean, if I can plot where the new high tide line will be I can deduce which plots of land will suddenly become beachfront property. I figure if I'm quick enough I could make a killing.