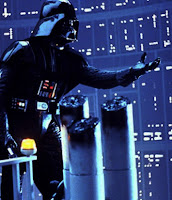 The Dark Lord of the Private Sith Schools tightening his grip on university education, yesterday.

Now, I don't tend to get overly precious about some of the language used by the BBC; I think that much of it is merely subs attempting to make the pieces a little more interesting to read.

However, I cannot help but feel that this article—coming on top of many similar examples—is just a wee bit biased.

Independent school pupils have increased their hold on places at the UK's 20 most prestigious universities.

Note that these pupils "grab" courses, and "increase their hold" on university places. It's all very domineering, the words of conquest, of strangulation and of aggression.

The acceptance rate for private pupils applying to Russell Group universities - which include Oxford and Cambridge - rose from 62.5% to 65.6% last year.

That figure, revealed by the Independent Schools Council, is five times the average success rate for applications to the elite institutions.

Wow! It makes you think, doesn't it? It makes it sound as though private schools are slowly taking over all the universities and, quite soon, there will be no places at the Russell Group for state school pupils, who must surely be in the minority now.

Right. So, actually, the majority of people at Oxbridge are, in fact, not from private schools. Now, I know that private schools are in the minority, but how "over-represented" are they?

Independent schools have about 7% of the school population - but this rises to 23% of pupils in sixth forms.

Ah, right. Interesting that. So, not quite as over-represented as the BBC would like to make out. But why have private school pupils "increased their hold on places at the UK's 20 most prestigious universities"?

Provisional figures for this summer's A-level exam results show that 7% of pupils in comprehensive schools achieved three A grades, but in independent schools 30% of pupils achieved this benchmark.

What the fuck? You mean that those in private institutions get better grades! Well, Watson, I think that we have solved the problem of why so many top university places go to private school pupils. We can rest easy now.

Fundamentally, private school pupils get the grades required to get into top universities. I am not going to bother pointing out that state schools are shit (and also have the most difficult pupils, generally) but... Oh, bollocks, I just have pointed that out haven't I?

Oh, well, never mind. I guess that those evil, imperialist Sith School pupils will continue to bag those top university places unless something fucking radical is done to enervate the state schools.

Remove the schools from state control, fund them with vouchers and stop ruining the lives of millions of young people, you statist fucks. As I keep on pointing out, we have a successful blueprint over in Sweden: now let's implement it and allow people to realise their potential.
By Devil's Kitchen at November 27, 2007

"I guess that those evil, imperialist Sith School pupils will continue to bag those top university places unless something fucking radical is done to enervate the state schools."

And yes I totally agree with your post. Moreover, I would imagine a large number of the state school entries will come from Grammar Schools, yet another reason not to kill them off. But those fuckers won't see this...

Incidentally my wife is a teacher; she got good A-levels, went to her local uni (as did I), got her degree, went to a school as a technician, went back to uni at great personal expense for her teaching qualification and got a job at a boys grammar...cept it wasn't a grammar in anything but name anymore, was filled to the brim with aggressive young men from the local sink estate and they share about 3 brain cells among the thousands of them. She deals with several language barriers, the majority of teachers have to hide in their bolt holes on the last day of summer term due to the large number of young men leaving "with a score to settle" (I would regard this large number as <1; any more than 1 is too many). I think she is starting to see things my way now though, especially since the rot has spread so far in, not only to the pupils but also to the staff; a cleaner didn't bother to clean her lab on Friday where the last lesson featured a heart dissection- you can imagine the smell on Monday...

Politicians don't suggest closing down Manchester United because they're so succesful; or making them pick their team from player in the Isthmian league to give equal opportunities. So why do they propose similar for our schools.

Amy sane person reading this story would conclude that private schools are better and that most people want to send their children to private schools, ergo we must find a way of providing more affordable school places.

Statistics quoted tell only some of the truth. It's worth looking at the number of overseas students who form part of the University populations too. That would further reduce the numbers/proportion of public school entrants.

And anyhow, do those State School students who do not go to university feel that they would have wished to do so? Not in my experience. There's little aspiration for university life. Much more for earning money immediately.

tGS - I think they are now, with the "idea" that too many foreign players are damaging the sides.

Funny how people can talk freely on the BBC about such things, yet if you said this about any other section of the economy (and considering that players learn much on the job) you would get shouted down as racist or Litter Englander.

Just one question, sorry if I have missed the answer in previous posts. How do we avoid state funded Madrassas and such?

This a genuine quest for insight.

Using your figures I make that 56% of the students with 3 As come from independent schools and 44% from comprehensives. Roughly in line with the admission rates at Oxbridge. Well who would have thought it!

But this calculation assumes that all state schools are comprehensives. Where do grammar schools fit into this? Are they counted as comprehensives or is there something else the BBC isn't telling us?

So what you're saying is that the best education should go to those people who are most able to pay for it?
If so then I'm glad you enjoy pointing out that you're a cunt

My first comment went AWOL, to summarise, the counter headline to all this crap is ...

Same numbers, different headline, and a delightfully uninteresting one to boot.

Great comment from Anon there! You really got the point, didn't you?
DK wants to know how we can make state schools more like private ones and you say that means the best education going to those who `are most able to pay for it'.

More to the point, DK has missed the Labour philosophy completely. It's about social justice, innit? It's about forcing universities to attempt to deal with the massive fuck-up that is two thirds of the state education system. `We've charged the taxpayers billions and billions of pounds to make a complete and utter dog's breakfast of educating their children and now we're going to shame the universities into accepting the ill-prepared products of this statist, indoctrinating, pablum-feeding, innumerate, illiterate, scientistic, galloping parody of a system. And tell them to fix the problem. Or else.'

That's what's going on and half the population love it. One would like to tell them where to put the white heat of technology, but one is not gifted like DK with a command of suitable portions of the English language

In fact if you make allowance for their intake Private schools not only do not perform, especially well . Do you think parents send their children to Eton because of the well appointed ball room for learning to waltz or the lush cricket pitch or even the fag sodomising chambers . Course not. Its to give them a free ride into power and influence by associating with their peers in the corridors of power as we see by the public school, domination of the laws, the media and politics.
It seems to me that you have all missed the point of markets , meritocracy and and to be more specific the charitable status of Public schools. Their charitable status is a jojk in that they are institutions designed to deny access to opportunity to the underprivileged the historical accident of charitable status is clearly wrong . there is no justice in the tax payer funding schools designed to keep them down , none at all and there is considerable rage in Conservative circles that their rivals in the Grammar sector have been outlawed , I do not share it as they also do not perform well. I would not ban Private schooling but I would discourage it .

Without free access to opportunity freedom becomes freedom to exploit the weak . markets do not operate if they are un policed of monopolistic practice e which s exactly what Public schools are . Early entrants to the social race buy up all the advantages and monopolise the benefits .

Those who believe ion meritocracy, freedom and a coherent society should be working to provide a good education for all and the way to do that is to stop people opting out of the one we get. I recommend the lottery system allied with vouchers and various other measures designed to reintroduce discipline It was a greats shame that David Willets was shouted down when he tried to open the subject up for imaginative thinking .


Anon DK is not a cunt. The balance on this subject between the Liberty to buy for your children and societal loss of freedom is a difficult one and the bland assumption that the way to solve it us to hand the problem to the state has been shown to be wrong and disastrously so . We see the result in your semi bestial daub.

You are a child

Every year, Oxford and Cambridge publish statistics on entry.

Every year the important point gets missed - given equal A-level results, a candidate from a state school has an equal chance of getting a place, compared the private schools. That is from the first stage of the process - actually writing on the form "I'd like to go to Oxford/Cambridge".

Private schools produce better results, but in addition a very large number of state school pupils with the grades to get into Oxbridge *do not even apply*.

There is no cost to apply. No barrier. All you have to do is to tick a box and write the name of a university.

The most probable explanation is the class barrier - from below. At uni I met one girl who had the grades to go to Oxbridge - she didn't apply because her teacher told her she wouldn't get in. She was staggered when I invited her to meet students in Oxford (my home town). She honestly believed that you had to be rich and posh to get in - five minutes conversation with a random collection of students fixed that.

She did her MA there.

Do Oxbridge not still have their own entrance exams?