The chaps at Little Man, What Now picked up on my Union funding piece and it is obvious that I didn't make myself clear enough.

Devil's Kitchen claims that contributions from trade unions to the Labour party can be seen as just as corrupt as rich individuals laundering their money through other people to make anonymous large donations to their political party of choice.

That's not quite what I meant, so I thought that I would clarify quickly.

It wasn't so much of a "claim" as asking why the Unions should be treated differently if their donations are, as those in the Labour Party would claim, merely lots of donations from individuals.

The point is that a number of Labour people have said that, for instance, donations from individuals (such as Ashcroft) and companies should be capped, but that this should not apply to the Unions because they are not really donations from one entity. Their excuse is that it is not the Union giving the money, but the Union members and the Union itself is merely one entity collecting donations and, for ease of admin purposes, giving them as one big tranche.

Regardless of the size of the original donations, this would mean that the Union is acting as an agent; so, does it have to declare the names and addresses of all its members?

One commenter on my piece pointed out that companies could be construed as multiple shareholders giving money; in which case, the shareholders' names and addresses should be supplied because the company is acting as a proxy. If, however, the company is seen as acting as an entity in its own right, entailing its donations being capped, then the Unions are acting in precisely the same way.

Actually, of course, we all know that the Unions do not operate as a proxy: they are, in fact, one entity donating to Labour so, if individuals and companies should be capped, so should the Unions.

More egregiously, as Guido has pointed out, the Unions deliberately launder taxpayers' money in order to provide funding to the Labour Party. 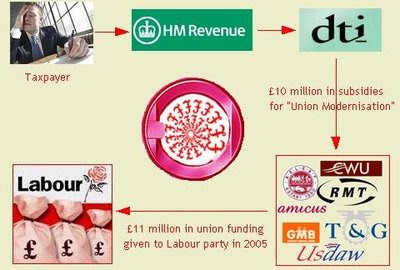 There's a lot more detail on this over at Matthew Sinclair's place.

UPDATE: just to clarify, I had seen the above two before and comtemplated linking to Guido in my original post, but they were conveniently found via Little Man, What Now's entry.
By Devil's Kitchen at November 30, 2007

Just to clarify for your readers, I did also point out the massive corruption of the Union Modernisation fund in my post.

If unions' donations should not be capped because a union is simply a group of individuals, then surely the same logic would apply to the groups of shareholders who group together to form companies? So if unions are exempt from caps on donations, then surely so comapnies should be too?