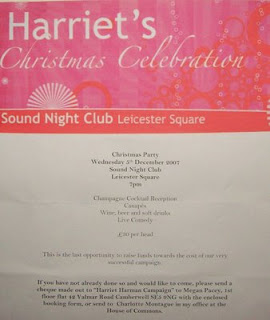 Darling Harriet's invitation: have you paid your £30 for the ticket of the year?
[Click to enlarge and see the full glory.]

I am amused to see that Iain has picked up some very useful information about Harriet Harman. One of the questions which was asked about the Kidd Abrahams donation was why she should have accepted the £5,000 after she had already won her campaign—especially as the fact that Gordon Brown's team had already turned it down? This would imply a degree of desperation on dear Harriet's part: why on earth should that be?

David Grossman has uncovered more about the reason Harriet Harman was so keen to accept money from David Abrahams Janet Kidd. She is in debt up to her very pretty eyebrows. Her campaign overspent to the extent that next week she is holding a fundraiser in Leicester Square, billed as "This is the last opportunity to raise funds towards the cost of our very successful campaign. Places are limited and tickets are available strictly on a first come first served basis.". Tickets are a mere £30. However, that's not the juicy bit.

It turns out that Harriet Harman has taken out undeclared loans to fund her campaign, which have not been declared to the Electoral Commission and the loans amount to a five figure sum. We already knew that she took out a £10k loan at the beginning of the campaign, which she was totally open about. Grossman is alleging that the further loans should have been declared to the Electoral Commission.

Indeed. And, as Iain has pointed out, David Grossman has a few questions for darling Harriet.

This lunchtime I filed a series of 11 questions to the Labour Party - I'm still waiting for a response
Here are the questions:

As a quick aside, I do wish that the Labour Party would stop all of this crap about how they are going to return the donations; as UKIP found, the law is perfectly clear: impermissible donations are to be confiscated and handed over to the Treasury.

Meanwhile, dear Harriet's arse is about to be handed to her on a plate...

UPDATE: Iain is also reporting that Peter Hain accepted £5,000 too.

This is what the Press Association is reporting about a donation from Gordon Brown's chief fundraiser to the Peter Hain Deputy Leadership campaign of, er, £5,000...

Work and Pensions Secretary Peter Hain tonight admitted that he failed to register a £5,000 donation to his deputy leadership campaign by Labour's new chief fund raiser. Mr Hain blamed an "administrative error" for the failure to inform the Electoral Commission of the donation by Jon Mendelsohn. "In the light of recent events, it has come to my attention that a donation from Jon Mendelsohn to my deputy leadership campaign was mistakenly not registered with the Electoral Commission," Mr Hain said in a statement. "Jon Mendelsohn made a personal contribution of £5,000 at the end of June 2007. We wish to make clear that this was entirely an administrative error on the part of my campaign. "I very much regret that the donation was not registered as it should have been and I am taking immediate steps to do so." Mr Mendelsohn, who was not the party's fund raiser at the time, is already facing calls for his resignation after the disclosure that he was aware two months ago of the proxy donations to the party made by property developer David Abrahams.

The question Mr Mendelsohn will need to answer is this: was it truly a "personal" donation?

The "ooops, sorry, ok, we'll return it" trick was one of the first items I picked up on. Total hypocracy. With UKIP, the donor was now valid and could have just torn up the cheque or written one right back.

As others have pointed out, in Sociofascist New Labour Land, justice is for "little people". If only we could return any ill-gottens or commission an inquiry stuffed with our mates into any wrong doing.

I am so glad the Rozzers, with Yates in the wings, are now involved.

For some reason I feel Harridan will be quite prepared to knife Gordon and bring on Milburn.