Funding scandals and the Unions 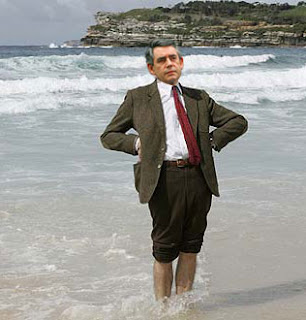 Gordon Bean on holiday: "Damn it! I told you waves to stop. Don't you know who I am? Right, I am going to stand here until you go back out again. No, I'm not moving..."

What Labour tried to do was scupper Tory funding while leaving their own untouched. So long as the Union link remains, attempts by Labour to prevent large scale individual donations are hypocritical in the extreme.

Quite so. Now, of course, many Labour supporters defend the Union donations, protesting that it is merely a convenience mechanism: lots of people who are members of a Union want to donate money to the Labour Party and the Union is merely a helpful agent in all this, passing on the money as one big tranche and thus saving on administration.

But if this really is the case, then what is the difference between what the Unions do and what Mr Abrahams has done? Mr Abrahams gave money to three four third parties which was then passed on as a donation to the Labour Party.

In the case of the Unions, lots of people give money to one third party, the Union, which then passes on the money as a donation to the Labour Party.

As Guido points out, Peter Watt was reminded of his obligations over Abrahams's donations by the Electoral Commission.

If the original source of the donation is someone other than the individual or organisation that transfers the donation to the party, the individual or organisation making the transfer is acting as an agent for the original donor. Where a person acts as an agent in making a donation, they must ensure that the party is given all the relevant information as listed at paragraph 5.4 (s. 54 (6)). Transferring a donation to an agent rather than directly to a party must not be used as an attempt to evade the controls on permissibility and transparency.

So, do the Unions who donate money to the Labour Party supply the names and addresses of all of the members who have donated the money? Because the Union is, surely, acting as an agent to the Union members and should thus pass those details onto the Electoral Commission.

If this does not apply to the Unions, then why not? Is this not a simply a case of Labour, once again, exempting itself from regulations whilst laying down the law on what everyone else must do?

But, of course, whatever the reasons, the spectre of state-funding for political parties is once more hovering in the wings. But as Timmy points out...

However, yes, this will increase the pressure for State funding of political parties. To which the response is simple.

They’ve proved that they are crooks. You want them to have our money as well?

No, no I don't. In fact, I have to agree with one of Abrahams's agents, Mr Ruddick.

So, do the Unions who donate money to the Labour Party supply the names and addresses of all of the members who have donated the money? Because the Union is, surely, acting as an agent to the Union members and should thus pass those details onto the Electoral Commission.

If this does not apply to the Unions, then why not?

Tenuous basis for an argument. Companies donate monies too; they are owned by their shareholders. Yes, companies are 'legal entities' (are unions?), but it's a similar situation.

I'm totally agin union funding, as I don't believe that it is necessarily 'voluntary' on the part of union members, but there's more robust arguments in favour of reform than the one that you put forward.

I think 'fuck all politicians' may be overstating it a bit, given that you are a politician yourself, if only in the back room, so to speak, as opposed to having been elected.

For myself, I still cling to the notion (yes I have been called a sweet, old-fashioned thing) that it is possible to find or be a non-corrupt politician. If this were not the case, what's the point of any of this? Just watching the bastards is not enough.

You have said you are a minarchist so I think you accept that a sane and organised society requires a minumum number of individuals to accept election to office. If one assumes that all the candidates are necessarily corrupt (as opposed to corruptible which I believe us all to be) you might as well save your political breath and your blogging finger, because whomever you oust will be replaced by more of the same. I hope you have more hope than that, if only so that you can get some sleep.

It's a bleak old world, all right, but it's not wholly bleak, and some days - and some politicians - are OK. The trick is to sort the sheep from the goats. That's where you come in. Keep up the good work.

I think that Cameron should be arguing for an opt-in system for Union Political Funds. At present this is a requirement in Northern Ireland only. In the rest of the UK an opt-out system is the norm. Many Union members fear that if they exercise their legal right to opt-out their card will be marked. As a result of this and inertia Union members are financing Parties and causes which they don't support! There really is no argument for putting the onus on ordinary members to opt-out. It is time to end this.