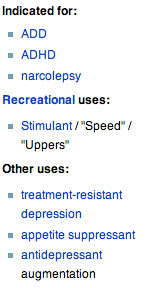 From Wikipedia's entry on Methylphenidate (Ritalin).

Apparently, some people are just starting to wonder if drugging children up to the eyeballs might not be the very best idea.

Drugs given to thousands of hyperactive children have no long-term benefits and could in fact be stunting their development, a major study has said.

The study of attention deficit hyperactivity disorder (ADHD) found that, while powerful drugs such as Ritalin and Concerta resulted in short-term behavioural improvements, after three years those benefits had disappeared.

Children who took the drugs for the full three years were also found to have stunted growth, according to the Multimodal Treatment Study of Children with ADHD (MTA).

The MTA has followed 600 children in the United States with ADHD since the 1990s and has just published its latest findings. Prof William Pelham, co-author, from the University of Buffalo, said: "They weren't growing as much as other kids both in terms of their height and their weight.

"There were no beneficial effects - none. In the short run medication will help the child behave better, in the long run it won't.

"That information should be made very clear to parents."

Ritalin (methylphenidate) and other such drugs used to treat ADHD are, in fact, a type of amphetamine, or "speed". In Britain, speed is a Class A controlled drug for the obvious reason that it's pretty fucking strong and can have some slightly disturbing side effects.

One of the side effects is that amphetamines are an appetite-suppressant. Now, childrens' bodies are growing at a reasonable rate and they need to have an ample supply of food in order to provide the materials to allow them to grow.

Why the fuck is anyone surprised at the finding that those who are regularly dosed with amphetamines aren't "growing as much as other kids both in terms of their height and their weight"?

Some years ago I was reliably informed at school by a few female friends from Bell Isle, a notorious sink estate in Leeds, that speed also causes genital shrinkage; obviously them not being scientists, or particularly interested in observing some of the great unwashed testicles for prolonged periods of time they were not certain whether this is temporal or a permanent effect - my guess is its temporal and an artefact of the growth retardation mentioned. From this point on though I naturally declined having my balls shrunk so I could enjoy frequent nosebleeds and amphetamines.

My only question now is how is mother-dearest/family doctor-dearest/politician going to explain the pay off when little Timmy has underdeveloped gonads, adolescent features well into his 30s and a quickly rising, previously depressed hyperactive streak starts asking questions?

Not to mention that there have been some correlation found between childhood ritalin usage and future illicit drug usage. From a strictly anecdotal point of view, I have witnessed quite a lot of said correlation.

"In the short run medication will help the child behave better"

What this means in fact is that the child will be easier to control - a "benefit" for those around him, rather than for the child himself. Now it turns out (surprise surprise) that there is a downside.

I am also aware of ritalin-prescribed children SELLING their pills to others for as high.

Yes, the "pill for every ill" mindset - look at the "statinisation" bandwagon for the oldies.

But let's face it since most people find life so intolerable without drugs; cannabis, nicotine, alcohol, heroin, cocaine, caffiene, ecstasy, etc, etc - why are we suprised when a few unruly sproggs are supplied with a "class A".

After all the magic bullet is far easier to dispense than addressing the underlying family & social factors affecting a childs behaviour, even if several deaths have already been reported.
http://www.psychminded.co.uk/news/news2006/feb06/Disordered%20thinking.htm

Naturally, if I was a concerned parent, I wouldn't want to see my child's development inhibited, but nor would I want to see NHS resources go to waste.

Neck the lot, I say.

Quite. Psychiatry and science seem to have taken divergent paths, and the rest of medicine will no doubt follow (impelled in part by paternalistic government who think that their regulators have the right to collude with that part of the pharmaceutical industry who want to operate outside of the bounds of good honest transparent science).

Remember the meetings that took place between ministers and some rogue elements of the industry to allow exactly that: Link, and the extensive House of Commons select committee report into the role of the drug regulator, the implications and recommendations of which were quietly shelved by the government. [Link].

As A&E Charge Nurse points out, the real problem in many cases isn'teven medico-psychological (is that the right term?). In most cases the kids are just being kids and need a bit of discipline.

The problem is teachers and parents can't or won't impose that discipline especially when drugging the little buggers into a stupor is so much easier.

I'd suspect that teachers are the prime culprits in this. Realistically what does Miss Wimble of Class 2B really care what happens to Little Johnny in 3 years time? By then he'll have moved on and become someone else's problem. She'll be more concerned about the next bunch of sprogs she's been assigned to keep in line (if she hasn't gone mad and left the profession in the mean time).

And before anyone accuses me of maligning teachers, just put yourselves in their place. What I've described isn't "evil", it's simple human nature - deal with the immediate problems first, then the airy fairy stuff.