Boris: what the fuck were you thinking?

Boris's latest article has mightily pissed off the fine people at the UCL Libertarian Society.

[Hilary] Clinton is economically naive, spouting nonsense that is only believable because it’s placed in the wider context of a very left-of-centre Democratic nomination race. She has lauded the New Deal, called the free market the “most radically disruptive force in American life”, and lobbied for heavy tariffs on (of all things) candlemakers. Her support of more stringent campaign finance reform, a ban on flag-burning, and computer game censorship threatens freedom of speech. She has offered each 18-year old $5,000 to pay for beer college.

This doesn’t sound like a programme that Boris should support. When he spoke to UCL last October, he asked people to guess who his political hero is. Margaret Thatcher? Winston Churchill? Robert Peel? No, no, et mille fois non. His answer was the mayor from Jaws, because, in Boris’ words “he did absolutely nothing: just as government should.” Wonderful answer, illustrating a sound libertarian philosophy underpinning his characteristic umming and erring. So what the hell is he doing endorsing her?

It's a very good question and I hope, as does this writer, that this is mere political posturing by Boris. Either way it's a disappointment: either he really is the fucking idiot that so many view him as or he's playing to the gallery (and I thought he was better than that).

Whatever the case, Boris severely risks dropping more than a few notches in my estimation.

UPDATE: Boris's argument is based on the premise that Bill Clinton was a lovely, intelligent, sensitive chap and since Hillary is married to him, she should be President.

Though it pains me to say it, Tony Blair was a pretty smart operator. But I was lucky enough to watch several Blair-Clinton press conferences, and Bill made Tony look like a novice.

Well, Boris, you're right. Tony Blair was an ineffectual, war-mongering liar; a slippery customer with little regard for anything or anyone other than himself and, yes, Clinton makes him look like an amateur. And you support the guy?

I listen to Dubya starting to rev up the rhetoric against this member of the "Axis of Evil", and I cannot for the life of me see what good can come of it. When I hear the Bush White House proposing to bomb Iran, I yearn for someone with the wit to offer a more sensible approach.

Like what, Boris, you fuckwit? Inflating claims of genocide and then bombing Belgrade? Continuing to launch rockets into Iraq even though we weren't at war with them? This is a man who launched 22 cruise missiles into Iraq, killing six innocent people, in retaliation for an alleged assassination attempt on George Bush senior.

Is this the "more sensible approach that you are looking for? What the fuck are you talking about, you dozy cunt?

But whatever the strength of that case, I can't imagine that Bill Clinton would have made such a supreme hash of America's response to 9/11.

Well, yes, Boris: and those people who say that Clinton "allowed Bin Laden to flourish" would obviously then point out that, had Clinton actually acted, 9/11 would not have fucking happened.

For all who love America, it is time to think of supporting Hillary, not because we necessarily want her for herself but because we want Bill in the role of First Husband. 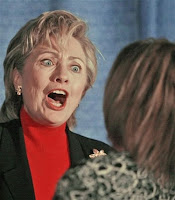 Er... I know that you are in the Fucking Women Who Are Not Our Wives Club with the man, Boris, and that you have some common feeling for him, but this guy is not going to be President: Hillary is. And you have admitted, she stands for things that are supposed to be anathema to you.

For fuck's sake, Boris, this is a woman who has said that the free market is the "most radically disruptive force in American life"! Is having someone like that in charge just so that Bill can reacquaint himself with the White House bedsprings really worth it?

And if Bill can deal with Hillary, he can surely deal with any global crisis.

Repeat after me, you wanker: "Hillary will be the President, not Bill, and she is an absolute bitch from hell who stands for everything I hate." Say it, you fuck.

Get a fucking grip, you blonde moron: this just isn't funny.


The photo comes from the highly amusing and mildly terrifying Really Truly Hilary Gallery: has to be seen to be believed.
By Devil's Kitchen at November 01, 2007

i'm hoping that his article was just a "taking the piss" one.

if that is not the case, then poor old Boris has a serious lack of knowledge of American politics. Does he even know how much of a hate figure Hilary is for the American right? if the Dems select Hilary, you can be guaranteed a Repub president in a concerted "anything but Hilary" campaign.
Heck, even Leberman Democrats would join in.

I suspect his article (which admittedly I have not yet read) was written in the rhetorical style that he sometimes uses, rather than literal.

Nope this is the real DK and friends

Thae man thinks that Iran should have the bomb as well

What a fucking choice between these two cunts: Red Ken or Red Boris....

I posted up on the Tele site that Boris, being a Libertarian sort of chap, should have been rooting for Ron Paul.

To be honest if you're voting in the American elections you're just as screwed as we are -- you have a two party system and you must weigh up which of the two candidates you least like before wasting your vote on a minority party that actually stands for something.

Pay attention, DK. "Blonde" with an "e" is surely the feminine form - is it not?
It just doesn't look right with an "e" anyway. "Blond" please from now on.

Has Gavin Ayling ever heard that a burning gay person in the United States is optional?

Then Gavin Ayling adds ("over exagerration for effect ...").

I don't understand what truth or tendency was being exaggerated in the first place.

Do Mr Bush's chums usually just press the Close button in the elevator when they see a gay person about to board, and you "exaggerated" this into "burning"?

More to the point, one of the people who surround Mr Bush is Dick Cheyney. Mr Cheyne's daughter is gay. Mr Bush seems OK with this, and with the other gay people who make up part of the population of DC and doubtless are numbered among White House staff.

On Boris, I think it was a mistake to choose Johnson as the Conservative candidate against Livingston. I think if the choice is between two buffoons, people will go with the buffoon they know.