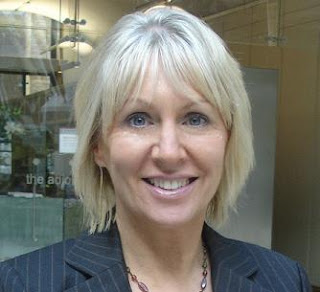 You can't see it, but Nadine's wearing a t-shirt bearing the slogan, "Back-street abortionists do it with rusty coathangers. Yay for them!"

Via Westmonster, it seems that there is a hilarious little bitchfight developing between Smug Recess Monkey and Nadine "mad as a snake" Dorries.

A few days ago, Recess Monkey published the Facebook profile of one of Nadine's (rather hot-looking) daughters, with some text implying an element of racism. Now, I don't think that this was particularly warranted (apart from the fact that it appears have annoyed Dorries, which can only be a good thing), but Nadine has responded in style.

Unfortunately, today’s blog is a rebuttal in defence of my family. As an MP I don’t mind it if people want to take a pop at me – it comes with the territory. However, not my kids.

Every young person I know has a Facebook profile, my daughters are no exception and use it to keep in touch with their friends. Unfortunately Alex Hilton, aka Recess Monkey, had no scruples about trawling through my daughter’s profile in order to damage her reputation.

My daughter’s face book account was the No 1item on his web site for a number of days.

A comment on my daughter’s site had been left by one of her best friends Chido Kawunda. Chido used the ‘N’ word when discussing this year’s Big Brother incident with Charlie.

Alex Hilton attempted to insinuate that the comment was made by my daughter in a derogatory way about black women. This is definitely not the case – ask Chido; and by the way, the issue is now on it’s way to Simon Smith at Schillings, to ask his advise as to whether or not this matter is libel and actionable.

That's a classic choice of law firm there, Nadine; say hello to Alisher if you happen to bump into him, will you? And I hope that you feel good about supporting a firm that has been so assiduous in attempting to gag free speech in the UK; yeah, you should be really fucking proud.

I suppose one wouldn’t expect anything else from the researcher of a Labour MP. It makes you wonder what kind of MP employs a person who spends his day going through Facebook accounts. Is this done on a Parliamentary computer I wonder? One paid for by the tax payer, in the time he should be working, again, paid by the tax payer?

But that is by-the-bye—the best is yet to come: oh, yes, it is! Because, having deplored Recess Monkey for insinuating that her daughter was racist, Mad Nad goes on to commit a classic of her own.

Nadine, Nadine, Nadine: are you implying that Recess Monkey is a paedophile, Nadine? Because that's what it sounds like.

UPDATE: if he really is a paedophile, Nadine, you might want to remove the three pictures on the front page which feature your daughters including, shockingly, your youngest, who is only 15! Or, of course, if you feel that involving your daughters in your MP life is wrong, you might feel, for reasons of hypocrisy, that they might be better removed. I'd be gutted personally—I do like looking at pictures of pretty girls—but you just never know who's watching, do you...?
END UPDATE

For fuck's sake, everyone knows that Recess Monkey gets right up my nose but implying that he's a paedo, Nadine, is a wee bit strong, no? And it is certainly hypocritical given how little he implied. Perhaps Recess Monkey might hire Schillings to look into a defamation action?—after all, Nadine, I bet that you are, from a financial point of view, more worth suing than Recess Monkey is.

Come to think of it, are you implying that anyone who looks at the Facebook profile of any girl under the age of 16 is a paedo? Because you had better get this humble Devil locked up: I have a couple of cousins who are younger than that and I occasionally look at their Facebook profiles to see what they are up to and say "hello".

Anyway, outraged though Iain Dale might be, I can't help thinking that Nadine is on rocky ground here. But, oh, ain't she on the warpath!

Thank you so much. I will, cheers.

but mess with my kids...

And what? What are you going to do, Nadine? Besides, I am sure that your daughter, being 22 and an adult, might well be able to handle herself. Or not. Personally, I couldn't care less. I just hope that the poor lass is less loony than her mother.

* I use the word blog in its loosest possible sense: Nadine Dorries does not have a blog. A blog has several features, two of the most important of which are a form of feedback, i.e. comments, and permalinks to individual fucking posts, for fuck's sake.

Nadine Dorries has a reasonably regularly updated website; it's not a blog.
By Devil's Kitchen at November 19, 2007

urggh... that whole spat is ugly.

but Alex was very fucking stupid doing it - a mother on the warpath defending her brood is a force of nature that no man can defend against.

dale is right - he should drop it and apologise.

It is a dead end, a non-story.

It is less than the proverbial storm in a tea-cup.

I'm not "excited"; I am just happy to stir up what looks to be an amusing blogwar between two people I don't particularly like. It might be entertaining...

Well in that case, I take it back. Stir away.

They are, after all, none of them exactly likeable.

Oh my—did you read the comments at the Monkey's? Fishcake: "I’ve looked through her friends and I can’t see you there. So either you’ve been sent this or as a member of the London network have looked up her open profile, which In my eyes makes you a stalker."

Looking at the open profile viewable to anyone in your network which can be turned off at will is 'stalking'? I switch my location between Leeds and London on Fb depending on where I'm spending more time, and my inclination to do so last time was to look at someone's profile within the other network.

I'm a stalker now apparently. There are some crazy crazy people out there. Stir away DK, stir away.

"Has anyone told loony Christian Mad Nad that her daughter is apparently into women and men?

One assumes that Dorries junior means purely for friendship, of course.

She did not actually say the monkey boy is a paedophile, did she? She could have meant he's a cretin or a just a nasty bit of work.

Anyway it's all rather pathetic on both sides and I hope you go on stirring it up.

Targeting a blameless (what about innocent until proved guilty?) adult child of an MP, rather than the MP, is cowardly, spiteful and nasty.

i agree budgie. its just not on.

even if, for example, Euan Blair was caught with a massive stash of the finest Morrocan, i just wouldnt even fucking bother blogging that. couldn't be arsed with that crap. its the politicians that pass the laws - not their kids.

what Recess did is not clever and leaves a bad taste in the mouth.

Budgie & John are spot on - this cowardly little cretin should confine his attacks to Mad Nad. I have no brief for her at all, but this:

"As an MP I don’t mind it if people want to take a pop at me – it comes with the territory. However, not my kids."

...is well aid, and will get public opinion on her side of this sqalid little spat.

Still, 'cowardly, spiteful and nasty' is pretty much all RM has in his arsenal..

Nadine is a motormouth now bathing in her own hubris. Her 'blog' is littered with pictures of her family. Headlines are her oxygen. Stupid MP and heading for a crash. Recess Monkey is a twat for taking this line. Iain Dale is a posturing girl's blouse.

I think this is the point where bloging leaves sad and becomes really sad. And maybe a little childish.

In this instace I find myself disagreeing with Mr Kitchen. Dorries may be a humungous pain in the backside and Monkey Boy (he of the fake Thatcher Obit) is, frankly, beneath contempt. Yes, Dorries is a politico and is therefore in the public domain and yes, I'm sure her daughter is old enough to fight her own battles.

Many of us have profiles on facebook, but we hardly target the relatives of people that we dislike. How incredibly sad that would be.

The aptly named Monkey is showing us all what a spiteful and petty little bully he really is.

This is a red herring. Its possible to post-date articles. One can write something the night before and set it to publish later. I do that all the time to give the impression that I'm an early bird and not a night owl.