As simple as Simplex? 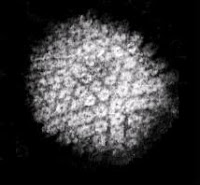 Evidence is building that the cold sore virus may be linked to Alzheimer's disease, an expert says.

In lab tests, Manchester University found brains infected with the herpes simplex virus, HSV-1, saw a rise in a protein linked to Alzheimer's.
...

The researchers infected cultures of human brain cells with the virus and found a "dramatic" increase in levels of the beta amyloid protein - the building blocks of deposits, or plaques, which form in the brains of people with Alzheimer's.

A similar increase was seen in the brains of mice infected with HSV-1.

In a separate experiment, the team stained brain slices taken from dead Alzheimer's patients and found DNA from HSV-1 attached to the plaques.

This is an interesting idea and certainly not far-fetched.

Scientists believe the discovery could pave the way for a vaccine that may help prevent the brain disorder, New Scientist magazine reported.

But such a breakthrough was a long-time off, experts said.

And this, of course, is the trick: Herpes simplex is a vicious but also rather clever virus to which we have yet to find an effective cure or vaccine (there is a vaccine being undergoing field testing but, oddly, it is only effective in women).

The main problem with Herpes is its ability to retreat and hide in nerve tissue, something that makes it extraordinarily difficult to treat effectively.

After an initial, or primary, infection, HSV establishes latency, during which the virus is present in the cell bodies of nerves which innervate the area of original outbreak. During reactivation, the virus is produced in the cell and transported outwardly via the nerve cell's axon to the skin. The ability of HSV to become latent leads to the chronic nature of Herpes infection; after the initial infection subsides, Herpes symptoms may periodically recur in the form of outbreaks of herpetic sores near the site of original infection.

As such, an effective treatment, preventative or otherwise, for Herpes simplex and thus (possibly) Alzheimer's, would appear to be a long way away.

However, knowing a possible source trigger for the disease—which is also thought to have a genetic element to it—is, at least, a significant progression...
By Devil's Kitchen at November 05, 2007