The Sound of Saud 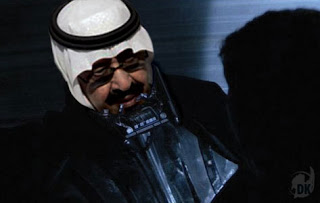 The army marching band (Coldstream Guards?) was playing the Darth Vadar Evil Empire "Imperial March" theme from Star Wars just as King Abdullah pulled up in his limo to greet the Queen.

What the fuck!!! Is this a jibe by the army (or rather HM Liz) at the Saudis?

Let's hope so, although I think that I detect the hand of the D of E, frankly. Whatever: as Not A Sheep points out...

As Wikipedia says "The theme...represents the totalitarian Galactic Empire as a whole, and Darth Vader specifically. More than other Star Wars themes, the March has attained an iconic status in the Western consciousness as a general "evil theme", and as such is used to portray power at public events".

Since just about all music and film seems to be banned in Saudi, King Abdullah almost certainly does not know what the music is. Ha!

Methinks the "blame" can be laid firmly at the door of the regimental bandmaster, a species, I understand, that has a unique and often very un-pc sense of humour.

I once watched a tv report of a parade in Hong Kong. Some visiting Red Chinese dignitary in a wheelchair was inspecting the guard while the band played "Knees Up Mother Brown" in the background.

And Pa Remittance remembers being inspected on parade by an aging royal lady. The incidental tune chosen by that bandmaster? "The Old Grey Mare Ain't What She Used To Be".

I suspect it's a kind of professional conspiracy - the "make the parade break out laughing and give the RSM apoplexy" game. There are probably prizes presented at the Bandmasters' Christmas Dinner.

I await the sound of Colonel Bogey next time Gordo is strutting about in the vicinity of a Military Band.

Well now this is odd. I watched Channel 4 news yesterday and they made reference to it and, sure enough, there was the Imperial March as the car drew up and Abdullah got out.

On the BBC news at 10, though, the exact same event was shown (presumably from a different camera, but one sited very close to the C4 camera) but this time the music was something unexceptional such as Pomp and Circumstance.

No matter how many muslims move in or are born here the stats never change!
Strange that!!

A bit like the UK popluation always around 60 million yet after Radio 4 farming today it was stated to be 77 million plus.

Stats that dare not speak their name.
Supermarkets sell a certain amount of meals.
We produce and import a certain amount.
Drug taking can be assessed by our urine and so can food intake.
Stats were passed from a reliable source too scared to admit this fact publicly.
The Inde 2007 sunday october 23/24?
Reported on this.
Lets hope the food crisis doesn't test this out or we're in deep shit.
BNET also covered the story under uk population 77 million plus.