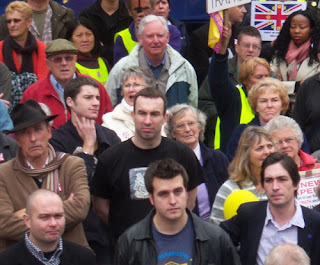 Your humble Devil contemplates Mark Wallace's left shoulder, whilst Daddy DK sports his trademark fedora. The photo was taken by Simon Richards of The Freedom Association.

There have been a number of write-ups of the Pro-Referendum Rally, with Helen's being by far the most comprehensive; there is little enough for me to add but, never one to hold back, I shall add my thought anyway.

As with many of these kinds of things, no one really seemed to know what to do. However, we stood about looking, in the main, grimly determined (although some, as both Helen and Prodicus point out, stood around looking like absolute prats). As Helen says, when the speeches began, there was a certain amount of participation.

There was a fair amount of loud cheering, booing, shouting (some appropriate some less so) and heckling, though none so loud as Devil’s Kitchen, who yelled across the crowd to somebody who was heckling Bob Spink for being a Conservative (clearly assuming that he was Ted Heath in disguise): “Shut up you tw*t!” It worked.

Ah, yes, your humble Devil is liable to get a little excitable in these conditions.

The stand out speaker, both for me and for Daddy DK, was Dan Hannan MEP who made absolutely plain what I have been saying for some time: these are not the government's powers to give away—they belong to us, the people of Britain, and we expect them to be returned, intact, at every dissolution of parliament.

He also made the point, which he reiterates, in a spirited column, today, that the British people have allowed their government to get away with all of this; as an aside, it brought to mind V's speech...


You can see some of Hannan's speech, as well as an off-the-cuff tirade from me, in this video.

The best part of the day was meeting the number of bloggers who turned up.

One commenter [on Prodicus's site] says that he went around looking for bloggers and found none. To my certain knowledge (and Devil’s Kitchen will support me) there were several present. It’s just that we do not carry notices on our chests that say “Blogger”. How on earth was the anonymous commenter going to find any bloggers?

Well, he need only have searched for those who were under 70 and not obviously insane. And, in fact, there were a goodly number of bloggers there. I think that about fifteen of us were in the pub before the rally and more like thirty afterwards. Stalwarts that I remember meeting include Ingram Monk, Harry Haddock, Martin Keegan, Roger Thornhill, Steve Green, Vindico, MJW, Thomas Gordon, Charles Pooter and a whole host of others (feel free to add yourself in the comments so I can get a comprehensive list).

Your humble Devil finally staggered home, blotto, at about 10 in the evening (as far as I recall). Despite the disappointing turn-out for the rally itself, I had an excellent day; I would certainly do it again.

The point is that we bloggers are the Enlightened, the informed; we know what is happening and we must continue not only to hammer home the points online, but also show support in the physical world.

Besides, a piss-up with like-minded people is extraordinarily good fun...
By Devil's Kitchen at October 29, 2007

I wanted to go but was denied by Mrs. N . To be fair we are completing tommorow and busy bees .

Sorry , another time , I very muchb support you , on this

I was there, albeit miserable and drinking tea.

I was there (on a whim). It was nice to meet you and Vindico and others. Had a nice chat with your father. I think I left before the heavy drinking started as I had a prior boozing engagement!

A brilliant day with the bloggers and something we should do again!


Perhaps we can even get Mr Dale to uses his large stack of cash AND GET A ROUND OF DRINKS IN! :)

Till the next time DK

Lost opportunity for UKIP to spread their message. BNP & The Communist Party GB were busy dishing out literature.

Organisers were so desperate for funds they had to rely on Tom Wise to help them out with the Bus and Megaphone.